I had been longing to go out west to gain some exposure to species like Mew, California, Heermann's, Western, and Glaucous-winged Gulls. It was suggested to me that a great variety of west coast gulls can be seen in central California in the winter. I began planning my trip and decided I would attend the Morro Bay Winter Bird Festival in January of 2010. Here, not only would I get a chance to observe my target gull species, but I'd also pick up some other lifers along the way.

On my first day at the festival, I participated in a Big Day that was led by Mike Stiles. Our first stop was Morro Rock where I easily checked off Western Gull. The "rock", as it's referred to by the locals, maintains a nice sized breeding population of WEGUs. This place is truely a marvel. 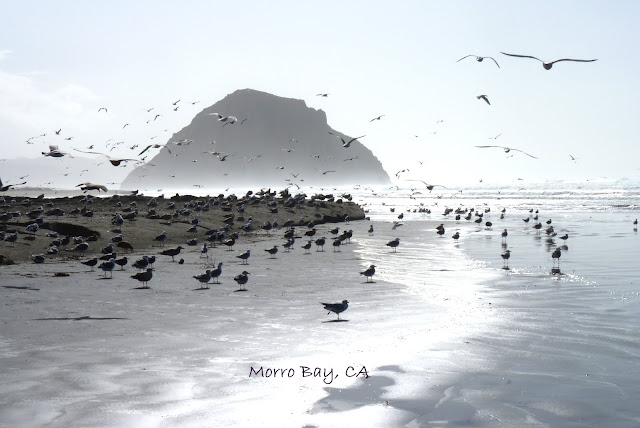 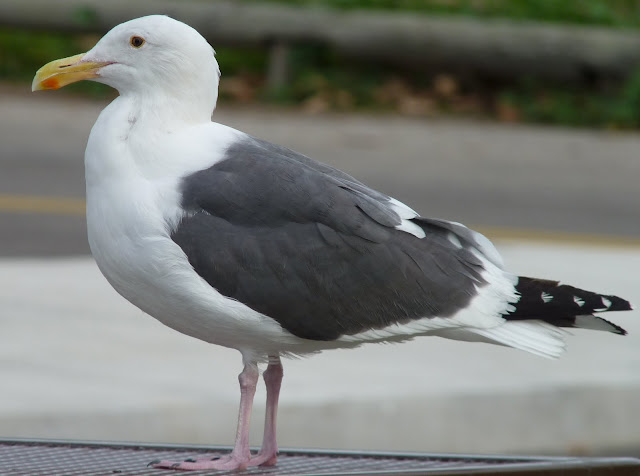 Adult WEGU. The dark iris suggest the northern race occidentalis. This race tends to have a paler mantle.
I attended a trip targeting shorebirds and gulls along Estero Bluffs on day 2. Our first stop produced 3 of my target birds: Glaucous-winged, Mew and California. What was of most importance to me was having found and identified these species on my own. Viewing was easy here and the gulls were only about 100 yds off. The first bird I noticed was this adult Glaucous-winged Gull that probably has some Western genes: 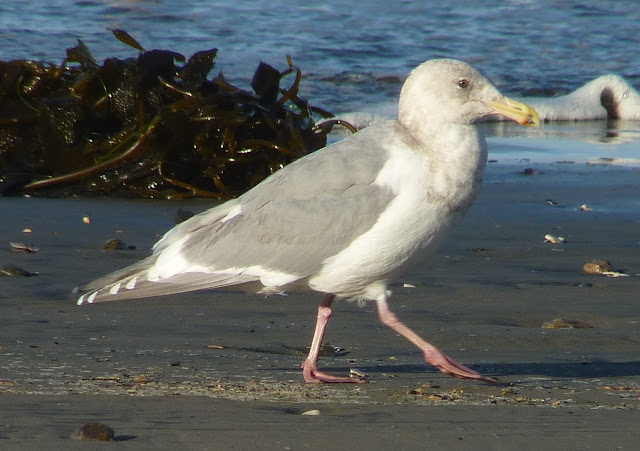 Wingtips a shade darker than expected on a pure GWGU. 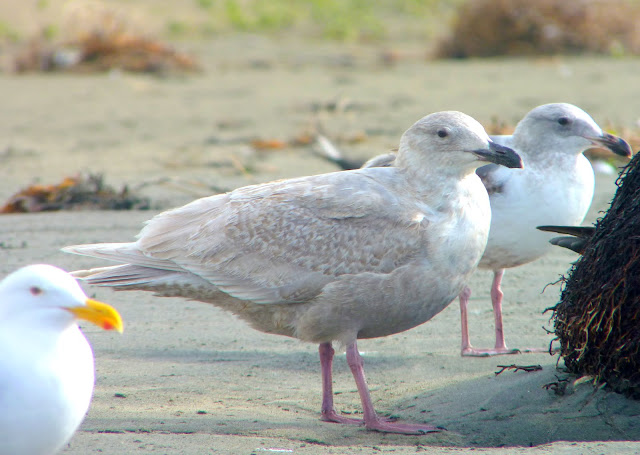 1st cycle GWGU. The wings on this bird suggest a pure individual. 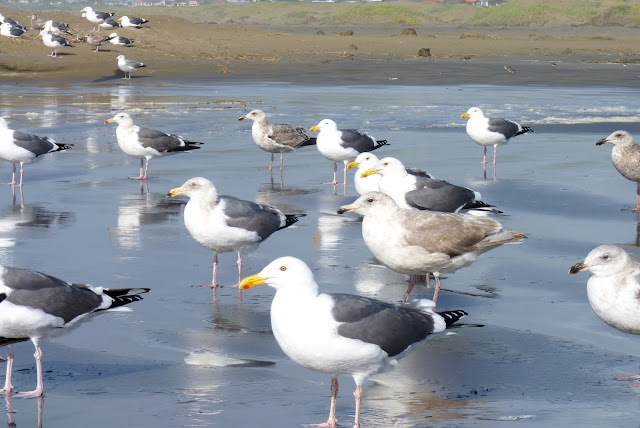 2nd cycle GWGU with WEGUs. Note the clean underparts and plain upperparts of this Glaucous-winged compared to the 2nd cycle Western Gull back to the left. Also, the adult WEGU in the front is probably of the southern race wymani due to its pale iris and relatively dark mantle.
It should be noted that Glaucous-winged Gull frequently hybridizes with Western, Herring and Glacous Gull in a south to north manner, respectively, from Oregon to northern Alaska. I'm sure I saw more Glaucous-winged hybrids than pure individuals on this trip. It is very common to come across GWGU X WEGU crosses, sometimes called Olympic Gull, and not uncommon to find GWGU X HERG hybrids. GWGU X HERG hybrids, sometimes called Cook-Inlet Gull, can be mistook for Thayer's Gull. Here is a large bird that superficially resembles Thayer's. 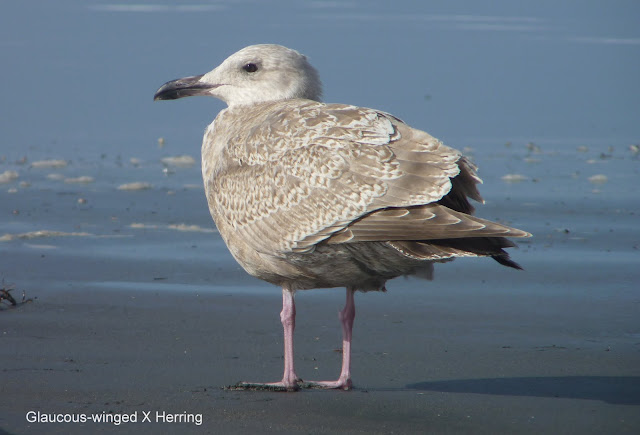 The white edges to the primaries may suggest Thayer's but the size of this individual is much more telling. The upperparts are a bit more frosty than Thayer's and the bill is that of Herring -- certainly not Glaucous-winged.
Then came the Mew Gulls. I called, "Mew Gulls landing on the beach"! The locals I was birding with raised their binoculars. "Oh yeah", said one birder with not an ounce of excitement in her voice as I jumped in joy. I'm fascinated by how relative birding is. One man's prize bird is another man's junk bird! You can appreciate the size differences here in this shot: 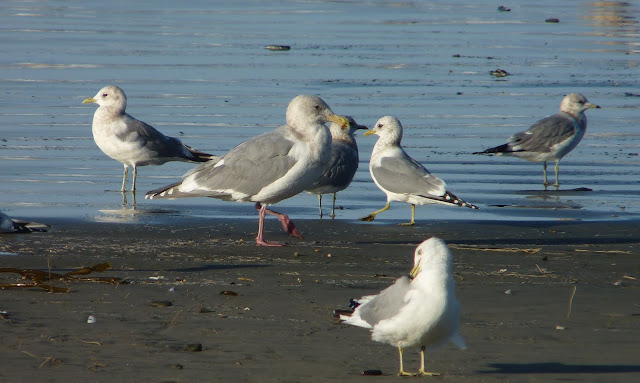 That's a Ring-billed in the foreground. 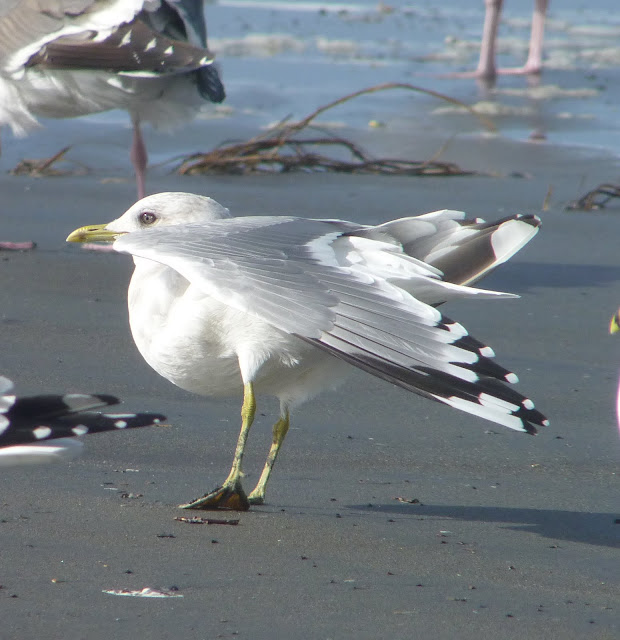 A beautiful feature of this species is the large white tongues and mirrors.
Also, the extensive white primary tips are not found in many gull species. 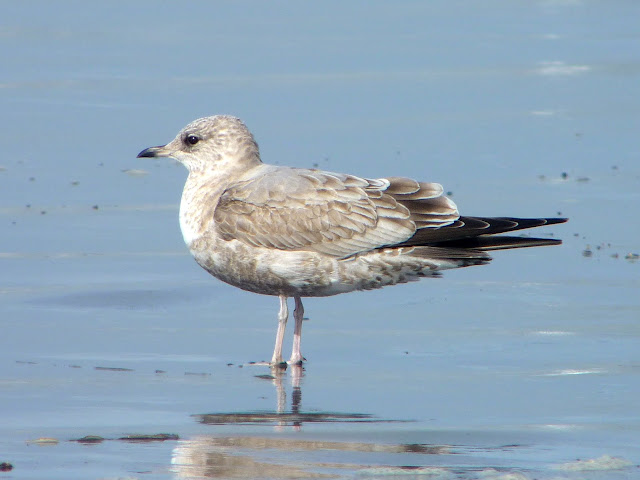 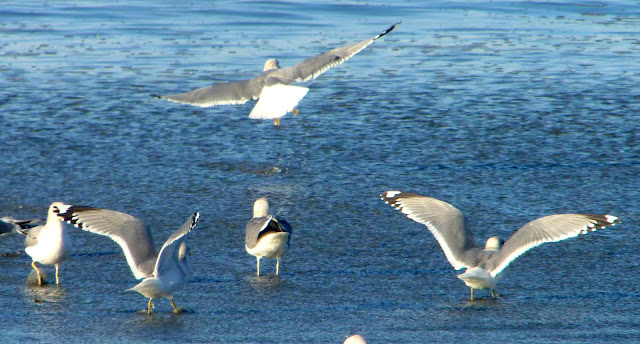 The thick white trailing edge to the secondaries is also very distinctive in Mew Gull.
Not long after this (maybe 5 minutes), a group of California Gulls appeared out of no where. Well, I'm sure they had made a graceful landing but I was too busy looking at the GWGU and MEGUs. My first impression was that they were similar to Ring-billeds but there was something disturbingly different. Obvious features that jumped out at me were the prominent red gonys spots and the dark irides. Body size also seemed large, but not as large as I had expected; Not Herring Gull large, but not a "dinky" Ring-billed either (BTW, have I mentioned I know a birder who drove over 2300 miles to see a Ring-billed Gull in Germany?). There was something elegant about these gulls. There weren't many options but I stalled in my ID. "Oh, those are California Gulls", I said to myself. I blame the brief brain-block on the euphoric state I fell into after seeing the Mew Gulls. 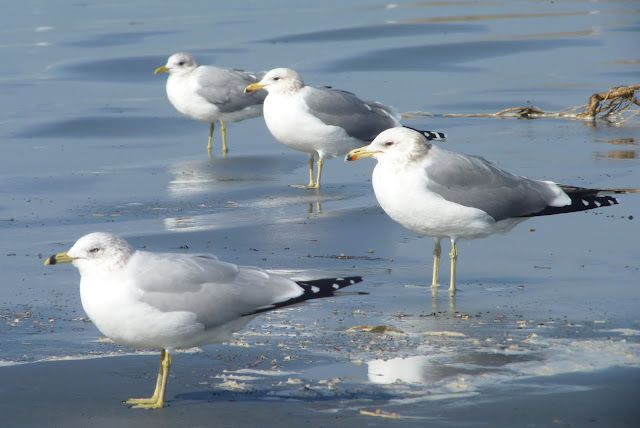 Mantle color is relatively dark in CAGU and MEGU (L.c. brachyrhynchus) when compared to
species like American Herring Gull and Ring-billed. 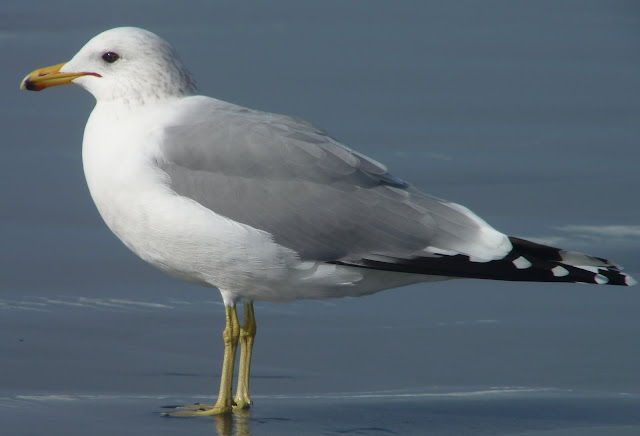 One distinguishing mark that easily separates this adult from an American Herring Gull is leg color. 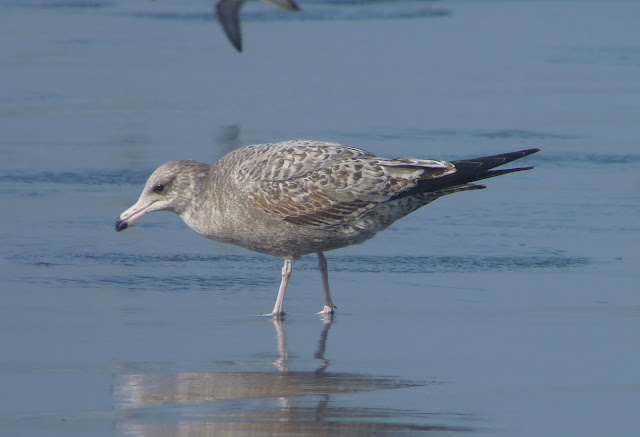 Here is a dusky 1st cycle CAGU showing the classic pinkish bill that is sharply demarcated with a black subterminal tip. 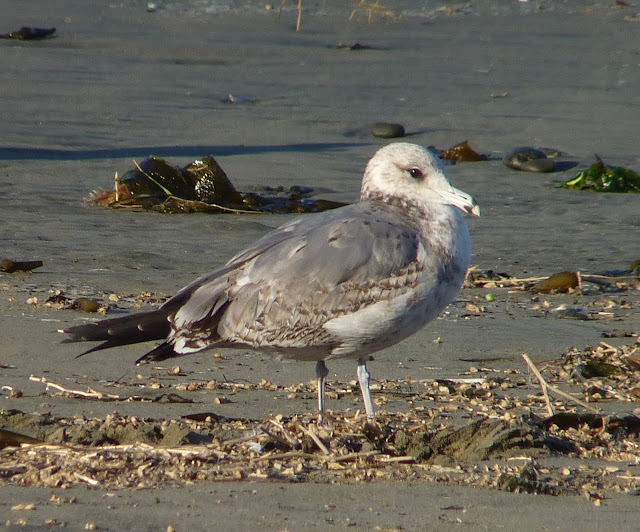 This 2nd cycle is showing an obvious bluish-gray tinge on the tibia as many CAGUs do.
The most unique of the gull species I observed is certainly Heermann's Gull. This species falls under what Steve N.G. Howell and Jon Dunn call the "Primitive White-headed Gulls". It disperses north from Mexico along the western coast after breeding. Many individuals are year-round residents along California's coast. 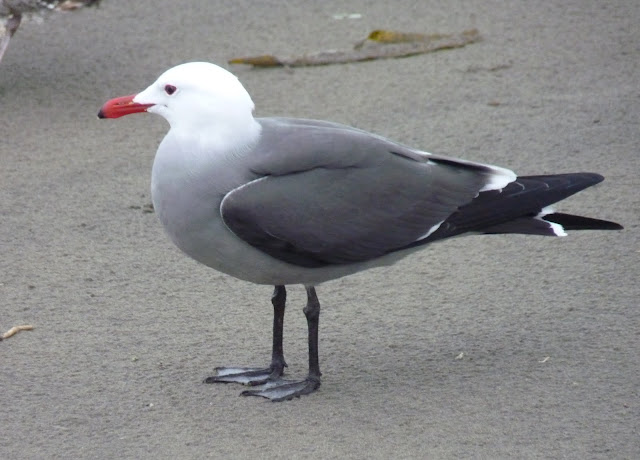 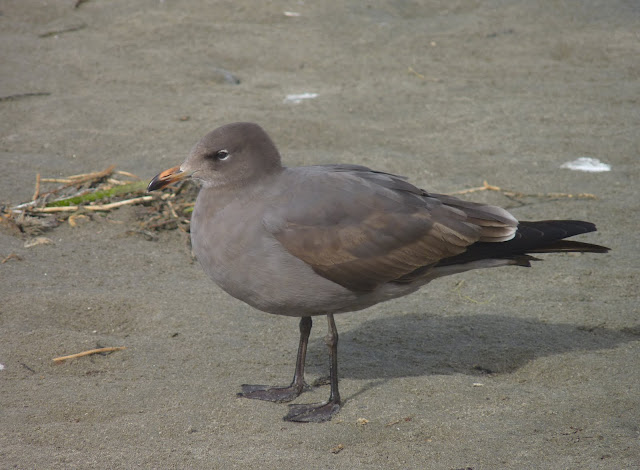 2nd cycle Heermann's
Heermann's Gull behaves much like a jaeger in that it harasses other gulls and often engages in kleptoparasitic chases. I've witnessed firsthand where an adult Heermann's forced a much larger adult Western Gull to forefit its catch. 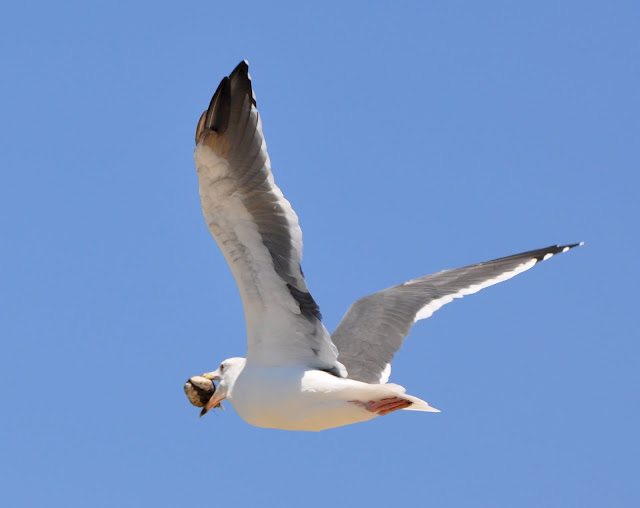 Western Gull fleeing from a Heermann's Gull.
Overall, the trip was very rewarding and, as always, the only thing I could have asked for was more time. I've come to learn that there's nothing difficult about pinning an identification to a gull in its expected range. What is profound is identifying the abberant idividual out of range.
at August 21, 2010
Email ThisBlogThis!Share to TwitterShare to FacebookShare to Pinterest