The objective of this post is to raise a pressing question that has been bouncing around in my head since at least early 2013: Do adult American Herring Gulls show any appreciable amount of variation in their gray upperparts?

Currently, the Kodak Gray Scale (KGS) value given for this taxon is 4-5 (Howell & Dunn 2007). For all intents and purposes, a one-point difference is typically thought of as minimal and negligible at best. Are there, however, adult smithsonianus individuals with KGS values that are potentially greater than 5? 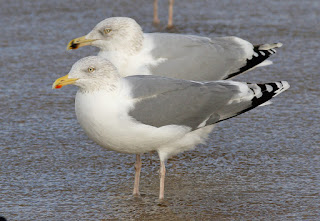 Intraspecific variation in gray upperpart color is well known in many gull species. Some remarkable examples that come to mind include, but are not limited to, Western Gull (wymani versus occidentalis), California Gull (californicus versus albertatensis), Lesser Black-backed Gull (graellsii, intermedius versus fuscus) and European Herring Gull (argentatus versus argenteus). These are subspecific examples, and in most cases, there are distinct ranges involved.


Consider, however, a monotypic species such as Slaty-backed Gull (schistisagus) with a reported KGS value of 9.5-11.5. A two point difference is noteworthy when one compares palest and darkest extrema.

The species is a bona fide black-backed gull, such that the occasional pale individual - potentially matching a pale graellsii Lesser Black-backed Gull - often raises doubt and confusion as to whether a hybrid is at hand or simply a pale-end bird.

A Closer Look at American Herring

Although widespread and the most abundant pink-legged species in North America, American Herring Gull remains largely understudied. Some authorities have suggested at least 2 distinct populations may exist, based on size & proportions, and wingtip primary patterns. However, I know of no exhaustive efforts that have been made to formally describe these types in known breeding colonies. Further, and most relevant to this post, little data is available on extreme dark-end and pale-end smithsonianus adults. Again, another consequence of little data from known-origin birds.

Below, I present 3 adult type Herring Gulls from east-central Florida. Each appeared to be 1.5-2 shades darker than surrounding adults.  Note that the bare parts are in line with Herring Gull, as are the wingtip patterns.

All 3 birds were observed between 24-28 January 2018. The darker upperparts were striking, allowing me to easily refind them with the naked eye. 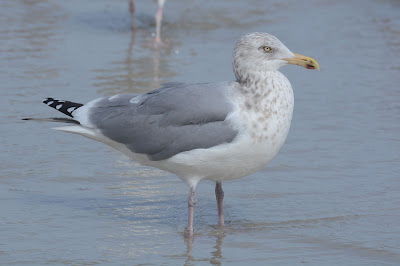 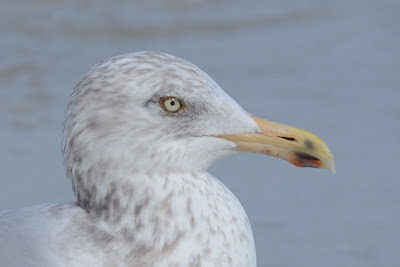 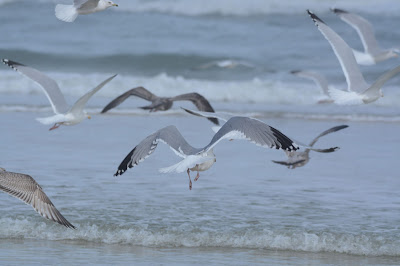 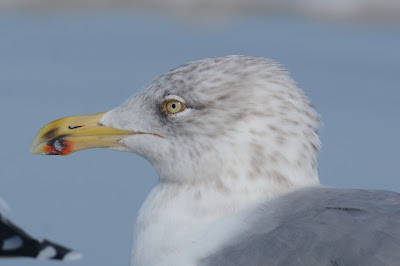 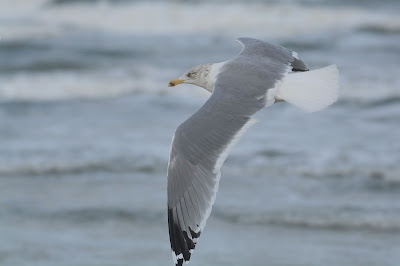 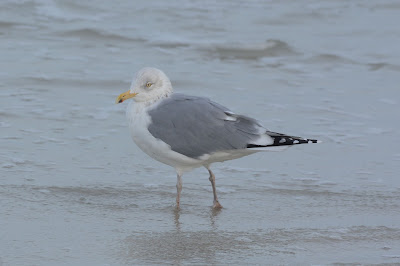 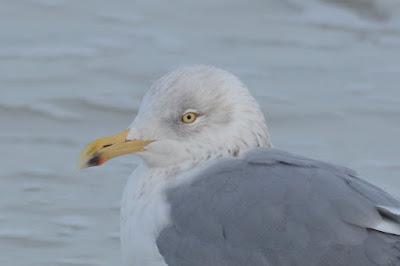 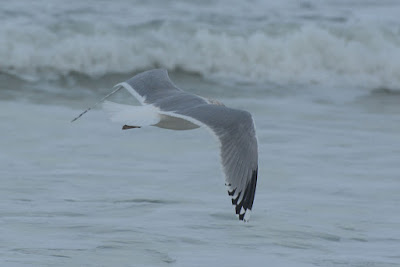 The most important question to begin with is why aren't these hybrids/backcrosses? Great Black-backed x Herring and/or Lesser Black-backed x Herring are the most likely dark-backed Herring hybrids. I'm not ruling out that possibility. But outside of the darker upperparts, there are no obvious hybrid characteristics. As noted above, all bareparts (leg color, bill color and orbitals) are within range for American Herring Gull. The primary patterns also belong to smithsonianus. There may be some distant genes responsible for the darker grays we see here, however.

As for other taxa to eliminate, Vega Gull comes to mind when we think of darker Herrings with pink legs. I feel confident in eliminating Vega Herring based first and foremost on the orbitals. I don't know of any examples where Vega has been documented with an orange orbital.

If this is nothing more than variation found in smithsonianus, why isn't it detected/reported with more frequency? Perhaps many of them are written off as hybrids. It may also be a matter of not appreciating these differences in the field. I must admit, I've not detected such dark birds in my Herring flocks in the Lake Michigan region.

at January 31, 2018
Email ThisBlogThis!Share to TwitterShare to FacebookShare to Pinterest