Kelp Gull (Larus dominicanus) is the most widespread large white-headed gull in the southern hemisphere with a unique circumpolar distribution. Recent data based on morphology and biometrics suggests there may be 5 subspecies (Jiguet et al. 2012).

The overwhelming majority of records in North America are adult type birds, which begs a reoccurring question, are we overlooking young Kelp Gulls? This seems to be a persistent theme. Taking an objective view, and considering the fact that young gulls have a propensity to wander, I would say the lack of records of 1st cycle birds may be due mostly to observer bias, especially around the Gulf Coast where Lesser Black-backed Gull has increased. But also consider the fact that a disruption in food supply may be prompting Kelp Gulls to stray. Hence, there would be less of a survival rate for an already distressed, misplaced and inexperienced young gull to make it as far north as adults.

I recently visited the Lima region (-12S, 77W) along the coast of Peru in hope of gaining some insight on the local population there. The subspecies found in Peru is nominate L.d. dominicanus.


Most identification material available on South American Kelp Gulls comes from reports in Chile and Argentina, down to Tierra del Fuego. In fact, it appears there is more information on Kelp Gulls from Antarctica than there is on those in the north of South America. Seeing that Peru is geographically closer to North America, it should be worthwhile to familiarize ourselves with Kelps in this region.

A visit in early November put me squarely in the austral spring, now approaching the summer season. Most of my time was spent in Chorrillos at Los Pantanos de Villa where 100-300 Kelp Gulls were on display daily. The predominate age group here was 1st cycle individuals (roughly 10 months old), which made up approximately 75% of all flocks.


The aim of this post is to present a description of 1st cycle Kelps in the austral spring, with emphasis on how they compare to the primary confusion species in North America: Lesser Black-backed Gull. It should be noted that the two have rather similar plumage aspects and patterns, and describing feather minutia to differentiate them may not always be the most fitting approach. Thus, there is a great need to use size, structure and bare parts for this identification.

A natural starting point is to compare this age group to similar age Lesser Black-backed Gulls. Plumage patterns should be compared to 2nd calender year Lesser Black-backed Gulls from the northern summer season (i.e., those on the threshold of commencing their 2nd prebasic molt). Although the two taxa are superficially alike, a close look soon reveals several structural, bare-part and plumage differences. Described below are averages which are found in more birds than not. Suffice to say there are always outliers which seemingly contradict any set of field notes as these are large white-headed gulls with considerable variability. In short, the reader should allow for variation when testing any of the notes described below.

The bill averages a relatively thick base, is stout, and often shows a bulbous tip similar to Western Gull. The culmen is somewhat blunt in shorter-billed birds (presumably males). Those with longer bills can show a slight droop, exaggerated by the wide angle at the gonys. Bill size and structure is likely to be of great use for separating Kelp from Lesser Black-backed Gull.

There is little order in bill color patterns, however, as some showed bicolored bills with demarcated black tips while others retained entirely dark bills. Below is an individual with a mixture of pink and black. Bill pattern is likely of little use for identification. 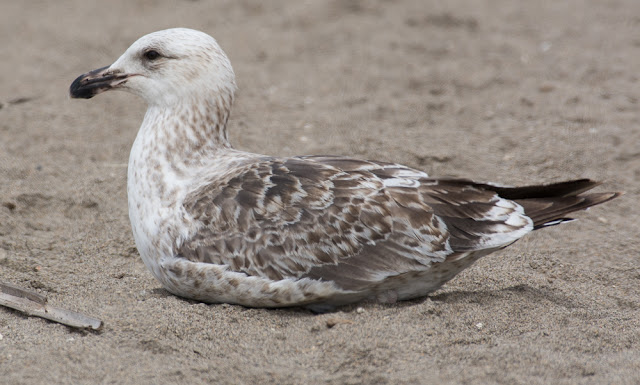 The gape on this age group seemed to immediately jump out at me, portraying a different facial expression than 1st cycle Lesser. It isn't a long gape, but the flesh is more swollen and exposed than on Lesser Black-backed, which seems to typically have the flesh on the gape covered in feathers. Also consistently seen is a dark post-ocular line in individuals that have molted into whiter heads. The eye placement strikes me as forward and higher on the head, and not as centered on the face when compared to Lesser. The head often has an elongated shape and is somewhat blocky with more birds averaging a flat crown than rounded. In some ways, we have a facial expression reminiscent of California Gull, on the head of a Great Black-backed Gull.

The markings on the crown are somewhat similar to the fine, thin, streaks of Lesser Black-backed Gull, but then soon become heavier and coarser along the hindneck. As we follow the markings down the side of the neck and breast, the pattern may become blotted with spots.

Overall the species averages longer legs than most other large gulls I have experience with. At this time of year, the majority of individuals showed traces of blueish-gray on the tibia, especially where the leg meets the body. This blue color was consistently observed and is likely to be of good use for an out of range bird. The rest of the leg below the joint was either a pale fleshy pink or beginning to yellow in a few advanced individuals. The joint on many birds is a large balled knot with a noticeably thick tarsus. 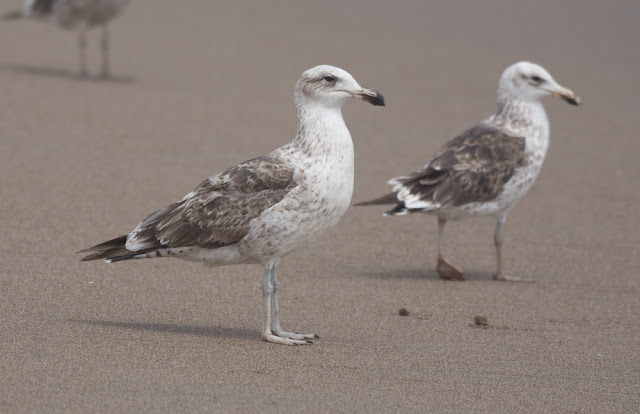 Many birds have replaced their tertials (via the 1st prealternate molt) as it is "their" first spring. The new, second generation tertials and scapulars often show broad white edges, forming bold crescents similar to Slaty-backed Gull. The scapular crescent is not always consistently large. However, the tertial crescent is reliable and I would consider this a great feature for pinning a Kelp candidate in North America. Scrolling back up to the group photo at the top of this post, one can see this obvious feature in just about every individual.

Of use when comparing Kelp to Lesser Black-backed Gull is the former's propensity to show a secondary skirt (secondary feathers hanging below the greater coverts when the bird is at rest). When the secondaries are fully grown, it's likely the tips to these feathers can be seen well below the greater coverts, recalling what is seen on other broad-winged large gulls such as Western, Glaucous-winged and Slaty-backed Gull. Consider this relatively plain-looking bird with dark brown secondary skirt merging with the tertials. This is not a field mark typical of Lesser Black-backed Gull. The shape of this bird is much more similar to Slaty-backed Gull than it is to Lesser Black-backed.

Wing projection is a tricky feature as it varies depending on posture, molt, wear, age and perhaps even sex. On average, the wing's projection (the extent of primary length past the tail) is short, or shorter than the longer-winged Lesser Black-backed Gull. It seemed to be much more noticeable and useful in adult birds which had all 10 primaries fully grown. In my opinion, it wouldn't be as useful a feature to rely on for out of range 1st cycles, and it should only be used as a supporting detail if present. Strictly speaking, one can find "unusually" long-winged and thin individuals such as this bird, which resembles the body profile of a Lesser, but this is the exception, not the rule:

In flight the arm is relatively short and broad. The inner primaries are dark and typically don't show a pale window. The outer tail feathers generally show more pigment coming up their bases (when compared to Lesser). The uppertail coverts are largely white at this time of year due to wear and new 1st alternate coverts which lack much of a pattern (see the first open wing below). It should be noted that some birds with retained juvenile uppertail coverts will show more markings (see the second open wing below).


The pattern to the underwing is not unlike a Lesser, but note the broad structure of the arm. The body is much more barrel-chested than the lankier Lesser Black-backed Gull. Despite all of the plumage characteristics mentioned in the literature, the most useful feature on the individual below is - unquestionably - the size and shape of the bill. The impression is much more akin to Yellow-footed and Western Gull. 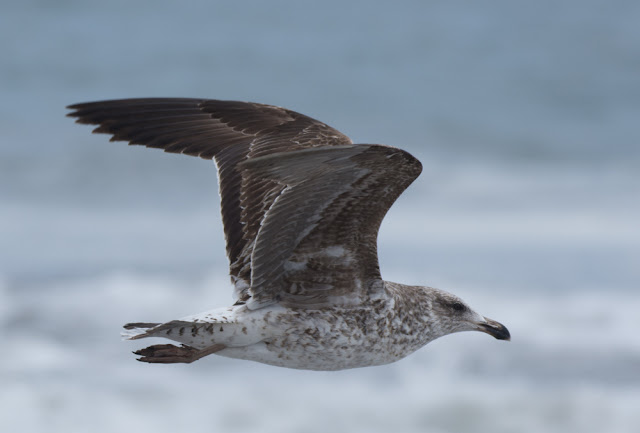 To summarize, 1st cycle Kelp Gulls in central Peru are among the northernmost populations south of the equator. This age group superficially resembles Lesser Black-backed Gull, but using a collection of field marks, the discerning eye should be able to pick up on a "typical" extralimital bird. It is important to keep in mind that the field marks described here should be used in combination and not singly. A larger gull with overall stronger proportions and long legs may be the first impression one gets. Body size can be as lanky as a small Lesser Black-backed, or, approaching that of a Great Black-backed Gull. There was only one instance where I thought the plumage aspect of a 1st cycle Kelp Gull resembled a Great Black-backed Gull (see below), but the head and hindneck streaking, and incidentally the gape, were sufficiently different.

A big takeaway from the images in this post should be the amount of variability in upperpart patterns (on par with the variability found in other large white-headed gulls). The wing coverts and scapulars strike me as being a bit plainer than a 1st alternate Lesser Black-backed Gull, with a velvety texture at times. Less advanced birds show patterns that are more diffuse than other black-backed species, such as this largely juvenile individual:

Molt and its implications on identification

The most exciting revelation during my visit was uncovering a flight feather molt sequence which, to my knowledge, has not been documented in this species. The pattern is radically different than any large gull in North America, and if understood correctly, could readily be used to seal an ID for a young out of range Kelp Gull. Look for this in an upcoming post in Part 2.
at November 10, 2018
Email ThisBlogThis!Share to TwitterShare to FacebookShare to Pinterest
Newer Post Older Post Home