Franklin's Gull has turned up in almost every state and province in North America. Its migration corridor in the United States is directly through the Great Plains where hundreds of thousands can be found annually. In the Midwest, Franklin's is uncommon to rare but more common in the fall. In Illinois, for instance, Franklin's Gull is left unchecked on most birders' lists in the spring due to this species' hurried nature to get to the breeding grounds. Midwestern states east of the Mississippi River have a much better chance of observing Franklin's in the fall, particularly in late October after a cold front has passed. I've learned that tracking weather systems for this species, as magical as it may seem, is for the most part reliable and predictable. The ideal parameters involve areas of low barometric pressure with a strong west to northwest wind with the passage of a cold front.
﻿

﻿I recently spent some time researching Franklin's Gull records in the lower 48 states and I remember reading in "Birds and Birding at Cape May" by Clay and Pat Sutton, that Franklin's Gull was recorded in record numbers in 1998 at the Avalon Seawatch. This event took place after a strong low pressure system ripped through most of the Midwest and north through Canada. At the time, I remember distinctly asking myself how this record number, which to my recollection was under 50 individuals, could be associated with a low pressure system in the Midwest. 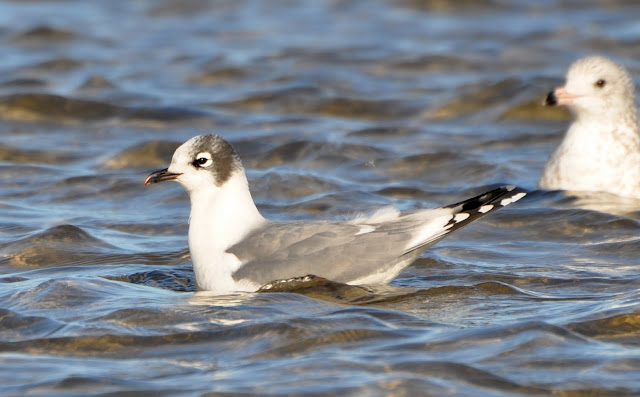 On 26-27 October 2010, the Midwest and surrounding central states experienced the lowest barometric readings ever recorded away from the sea coasts. The damaging winds and thunderstorms were likened to a Category 3 hurricane. I was on standby and waiting to see if indeed Franklin’s would pass through with the cold front. The night before, birders Bob Hughes and Michael Retter explained how the conditions were ideal for Franklin’s via the Illinois Birders’ Forum. Sure enough, as the cold front passed through the Midwest, reports of Franklin’s Gulls began to pour in.

Illinois, Indiana, Michigan, Ohio and Wisconsin all reported Franklin’s Gulls on 27, 28 October, 2010. My home state, Illinois, reported at least six distinct sightings with the 64th St Beach along Chicago’s lakefront tallying a site-record of 47 individuals (Paul Clyne). Wes Serafin reported a group of 20+ at Saganashkee Slough, an inland lake in southwest Cook County, IL. Ohio reported a flock of 29 at Caesar Creek Beach. Caesar Creek is in the southwest part of the state where only 1-2 individuals are recorded in the fall (Larry Gara). And if one needs more evidence that this was no fluke, New York also recorded two individuals as far east as Suffolk County (far eastern NY). Keep in mind that Franklin’s is casual to very rare along the Atlantic coast (Howell and Dunn, 2007). Did the birds intentionally avert the storm by shifting their migration route eastward or did the storm blow them east as they were migrating? Regardless, the conditions inherent in these storms are what I’ve come to call “Franklin’s Fronts” - experienced birders await them and expect to see Franklin’s Gulls trailing behind.

I found some time to make it out to the 64th St Beach in Chicago on 27 October, 2010. The winds that day were like none I've experienced on the lakefront outside of winter. The Saganashkee Slough flock was seen leaving in earnest at sunrise the next morning; This is typical of moving flocks of Franklin's, rarely dwelling for more than a day or two away from established staging areas.

Every fall, thousands of Franklin's Gulls descend on the Des Moines River Valley corridor in central
Iowa. Numbers increase in earnest as soon as the fall season begins, peaking in late September and through the first couple of weeks of October. The most notable massings are found at Saylorville Lake (the famed Midwestern lake that hosted the 2007 Black-tailed Gull) and Lake Red Rock (Iowa's largest lake).

As a denizen of the Chicago area, I had never observed more than 3 Franklin's at once and so I planned a trip out to these lakes in order to better familiarize myself with the "Prairie Dove". An obvious observation that I soon made was that the Franklin's are not very interested in the fish that the lake holds, but rather, this species hawks the area skies for insects. Also, hundreds of individuals can be found working the recently plowed agriculture fields. The birds begin to disperse soon after sunrsie only to return as the sun begins to set. Any description I offer to describe this spectacle would be deficient at best. Here's a photo that depicts this magic!
I arrived at Saylorville before sunrise and watched the sun gradually peek over the treeline. I gave the lake a once-over from the dam and spotted a sizable group of Franklin's on the beach at Cherry Glen. I drove around the lake and found my way to this flock in under 30 minutes. The gulls were engaging in what seemed like their morning ritual of preening and stretching their wings. Needless to say, there was no shortage of calling Franklin's as I approached the beach. I categorized their sounds as noticably higher pitched than Laughing Gull with a yelping quality that reminded me of Short-eared Owl.

With the sun to my back, I began counting the number of individuals with a pink suffusion on the underparts. I was a little disappointed with what seemed like a low ratio of 14:378. Franklin's consistenlty show this pink coloration much more than other gulls (Ross's Gull is a close 2nd). What I soon discovered after returning home is that this pink blemish is most common in breeding-condition adults; This is coupled with reddish legs and the reddish bill found on breeding birds.

at October 12, 2010 2 comments:
Email ThisBlogThis!Share to TwitterShare to FacebookShare to Pinterest

Every fall in late September, the Illinois Ornithological Society (IOS) offers an "inland pelagic" field trip to Carlyle Lake, with Sabine's Gull being the primary target bird. Carlyle Lake is the biggest inland reservoir found in Illinois and has indisputedly provided more state records for this species than any other site. More so, Carlyle now produces more Sabine's Gulls than Miller Beach in Gary, IN. Ken Brock predicted this over a decade ago in his Sabine's Gull paper that assessed this species' footprint in the Midwest:  "Although Gary, Indiana at Lake Michigan's southern tip currently boasts the largest total, based on current observation rates Carlyle Lake will claim the title in the near future (Meadowlark, V7 N1)". I'm unsure of current data, but if I had to make a prediction as to which state will claim the title next, I would put my money on Iowa, particularly from the large reservoirs in the Des Moines River Valley area (Saylorville and Red Rock Lakes).

Anywho, the IOS trip to Carlyle finds birders traversing the lake for several hours using a flotilla of 2-3 pontoon boats. Bread and popcorn is used to chum the gulls and eventually a Sabine's is discovered by one party which then alerts the other boats.﻿﻿﻿﻿﻿﻿﻿﻿﻿﻿﻿ 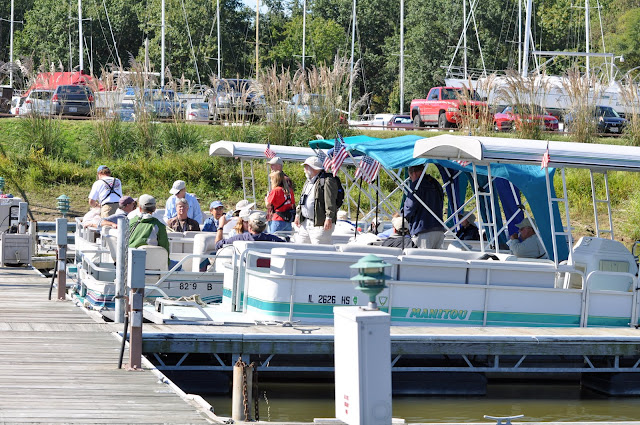 This year, I had the pleasure of attending this field trip for a 2nd time and I was not dissapointed in the results. In fact, I've attended this trip the last 2 out of 3 years with Sabine's gone unrecorded on the trip I missed. Are you thinking what I'm thinking? Yes, I should attend this trip every year so that other birders get a chance to see this species :) Tim Kussel for instance, has had a 4 out of 8 success rate and so it's not gravy every time you get on those boats.
Our search for Sabine's Gull took less than 30 minutes when one of our crew members, Anthony Friend, spotted a Sabine's flying right towards us. As expected, the bird was a juvenile that was probably no more than 3 months old. I should mention that in Brock's data from 1998, out of 111 aged birds, only 13 were adults. These numbers should have significant meaning to the vigilant birder (not I).

The day ends with an evening lakewatch from the Hazlet Olympic Pavillion on the west side of the lake. Here, we were again treated to extensive but somewhat distant views of two Sabine's feeding out at mid-lake with hundreds of gulls, tens of Black Terns and a Parasitic Jaeger. An interesting observation that I won't soon forget is the feeding style of this agile gull. While flying low, it would bank and come to a sudden stop where it would  then dip to snatch its food from the water. I commented to the folks around me that the behavior was very tern-like, although the wing-beat pattern was much more stiff compared to a Bonaparte's Gull or Black Tern.

Last month, I was reflecting on the uniuqeness of Sabine's Gull's molt strategy but I failed to put two and two together when watching this species from the Olympic Pavillion. For a brief moment, I thought I may have had an adult Sabine's out on the lake. I kept this thought to myself and studied the bird a bit more. Lighting conditions were less than ideal and from afar the brownish/gray mantle seemed solid gray as expected in an adult. There is no parallel as in the adult/juvenile Black-legged Kittiwake or adult/juvenile Bonaparte's when it comes to the upperpart pattern of Sabine's; Both ages are virtually identical from above.

The smoky wash to the nape and breast was undetectable to my inexperienced eyes. Since the bird I was watching did not have a black hood I thought, "Oh, why can't that be a basic adult"? Although knowing what to expect from earlier in the day during the boat trip, I squinted and squinted until I made out the thin tailband. The tailband was very hard to make out and I think that if lighting conditions were any worse, and had I not had a biased expectation from a few hours prior, I may have missed it completely.

Fortunately, a most humble birder from St. Louis rightfully reminded birders of Sabine's molt strategy in a recent thread on the Illinois Birders' Forum (IBF). Unlike other gulls that breed in the northern hemisphere, Sabine's is a high-Arctic breeder with a taxing migration. It does not have the time and energy to manage a complete prebasic molt on the breeding grounds or en route while migrating. Rather, this molt is delayed, or "suspended", until it arrives at its wintering grounds. Although limited head and body feathers may be molted during migration, an adult Sabine's seen in the interior states in fall will almost always have a full hood effect. In fact, Olsen estimates that over 90% of Sabine's Gulls seen in the northern hemisphere will have full summer hoods from August through early October. This implies that one should expect to see one of two plumages in Illinois: First Basic or Definitive Alternate, with the latter being much less common.﻿

A plumage not familiar to the interior states: http://www.youtube.com/watch?v=T9s-qVJly-M&feature=related