Miscellaneous Notes
at March 31, 2018
Email ThisBlogThis!Share to TwitterShare to FacebookShare to Pinterest 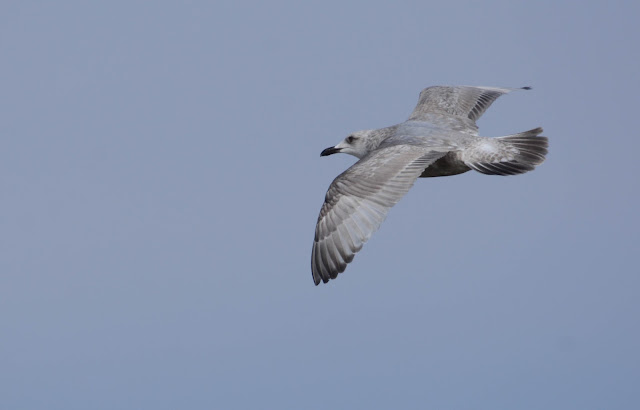 AGE: The rounded primary tips, plain and muted pattern to the wing coverts, along with the gray mantle feathers can be combined to age this individual as a 2nd cycle. A pale eye is revealed when zooming in closely and this readily points away from a 1st cycle.

IDENTIFICATION: There are several features on this large gull that suggest a white-winger. Notice the "venetian blind" effect on the outer primaries. In particular, the outer webs and inner webs show a consistent dark, then pale, pattern. The appearance of the upperwing is plain and uniform with what could be described as a velvety feel. The cold blue mantle feathers are neat and tidy, fading into the upperparts with little effort.

So which white-winger is this? Thayer's Gull immediately comes to mind, but why not a Herring Gull? Herrings are much more contrasty at this age and typically show messier upperparts that are more splotchy. Also, a Herring Gull should show darker primaries and tail band - black if you will. Also, the all-black bill isn't unusual for this age in Thayer's, but it would be unusual for a Herring in its 2nd plumage cycle.

at March 31, 2018
Email ThisBlogThis!Share to TwitterShare to FacebookShare to Pinterest

I made one last trip to Port Washington yesterday, hoping to relocate the adult Slaty-backed Gull - no luck! I was joined by Wisconsin birder Ted Keyel for most of the day where we observed gobs of Iceland and Glaucous Gulls. Not a minute went by where we didn't have a white-winger zipping past us or perched in sight. The gizzard shad die-off was yet in full swing!


As a consolation for having missed this particular SBGU thrice this season, a 3rd cycle type California Gull - my first for Ozaukee County - and an adult Laughing Gull helped repair spirits.


Eight species of gull was good enough for me, and Ted's company was most edifying. I believe our final count was ~10 Great Black-backeds, ~4 Lesser Black-backeds, ~2500 Herrings, and ~600 Ring-billed Gulls. Lake Michigan at its finest!

at March 01, 2018
Email ThisBlogThis!Share to TwitterShare to FacebookShare to Pinterest

The theme in February was Slaty-backed Gulls. Multiple adults, two 3rd cycle types and a 2nd cycle type were seen and photographed in the lower 48. This continues to beg the obvious question: how many 1st cycle birds are being overlooked?!

The increase in Kamchatka Gulls between Nova Scotia and Massachusetts might be contributed to several returning birds. Nonetheless, this novelty is curious to say the least and it'll be interesting to see where we go from here.
at March 01, 2018
Email ThisBlogThis!Share to TwitterShare to FacebookShare to Pinterest
Newer Posts Older Posts Home
Subscribe to: Posts (Atom)