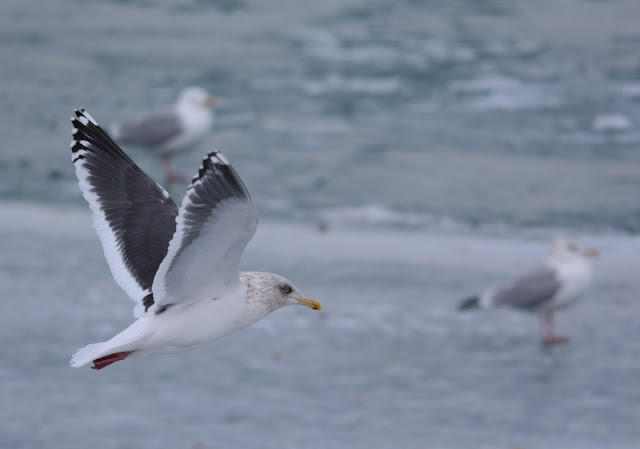 Structurally, both Western and Great Black-backed Gull have noticeably different bills than what's seen here. Western typically shows a brighter yellow bill with a wider gonys angle - a bulbous-tipped bill, if you will. Great Black-backed's bill is much more stout and thick - a strong bill all throughout with a blunt tip.


Notice in both of the images above there is very little in the way of head markings. Both of these black-backs average much less head markings than all of our other LWHGs, even in basic plumage. Also, neither possesses the menacing stare of our quiz bird, with eyes that appear to be encircled with mascara.

Perhaps of most importance when identifying this month's quiz gull is the wing pattern. Notice the remarkably thick white trailing edge, a glaring field mark that screams Slaty-backed Gull.

Here's a cropped image of this gull's right wingtip: 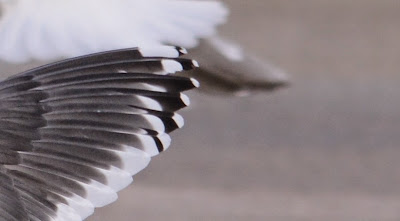 The white on the inner primary tips eats into the black edges with a so-called "string of pearls" on the adjacent mid-outer primaries (white tongue tips abutting the black sub-terminal bands on p5-p8).

A species that's generally increasing in North America, particularly on the Great Lakes in winter, this month's Slaty-backed Gull was photographed in Lake County, Illinois. February. 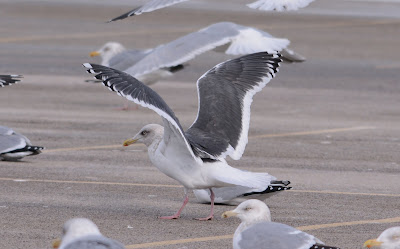 at October 31, 2017
Email ThisBlogThis!Share to TwitterShare to FacebookShare to Pinterest

Strong westerlies in the Fall - especially October - almost always drop a few Franklin's Gulls on the shores of southern Lake Michigan. Yesterday, while working the gulls at the Miller Beach Lakewatch in Lake County, Indiana, these 3 came barging in from the, yes you guessed it, west! 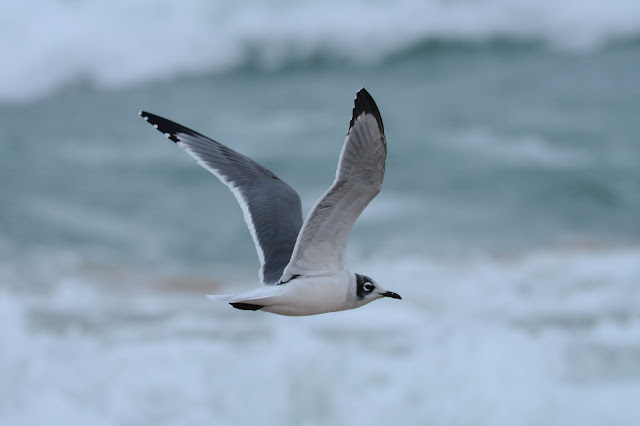 at October 16, 2017
Email ThisBlogThis!Share to TwitterShare to FacebookShare to Pinterest 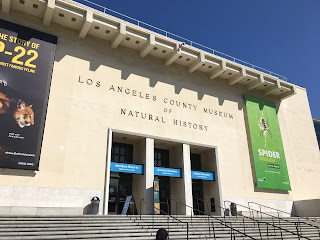 Late last month I paid an overdue visit to the Natural History Museum in Los Angeles. Like a child in a candy shop, I lost myself with a 100 or so trays of both hooded and large white-headed gulls - mainly New World taxa, with a sprinkle of Western Palearctic species.

Here I had the pleasure of finally meeting one of California's birding & ornithology treasures, Kimball Garrett. Kimball has been with the museum since the late 1970s and currently serves as the ornithology collections manager.

The first specimen he was keen to point out to me is California's first record of Red-legged Kittiwake. This male was found emaciated several miles inland in Anaheim, California on 28 February 1996 (Orange County). Like most other records of RLKI that make it to land in the Pacific Northwest, it died shortly after being picked up by rehabbers. 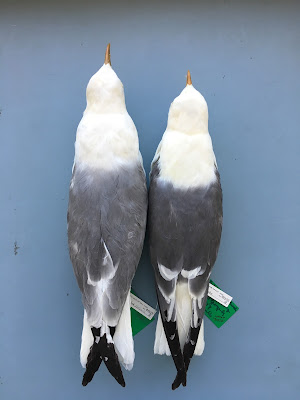 While on the subject of kittiwakes, any larophile will appreciate a bird's eye view of both Rissa species, side-by-side.

Both adult females, the Red-legged was collected on St. George's in July of 1978. The Black-legged Kittiwake is labled as pollicaris, collected in Alaska the same month. 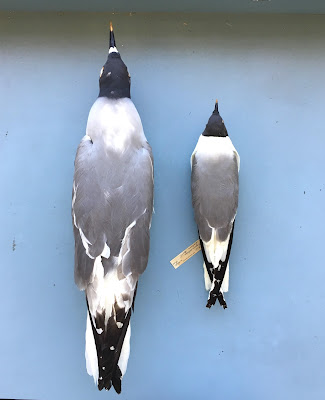 With the recent Swallow-tailed Gull episode in Washington state, I felt compelled to study the 15 or so specimens housed in the collection. The size difference between both of these fork-tailed gulls is astonishing. Never really having paid much attention to Swallow-tailed Gull's size when reading about them, I passively imagined it to be similar in size to Xema sabini. I should've known better with Sabine's only being 3-4" larger than Little Gull.

Both males, the Swallow-tailed was a fatigued bird collected on the Galapagos in February 1957. The Sabine's is a June bird from Alaska.


Keeping with my tradition when visiting any gull collection, this duo is one I never pass up... 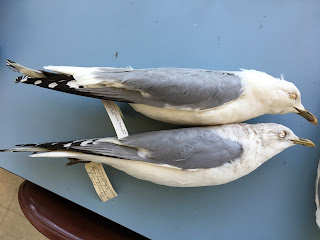 Although the upperpart coloration isn't appreciably different in this image, the bill thickness is. 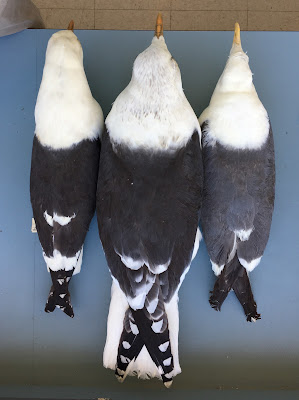 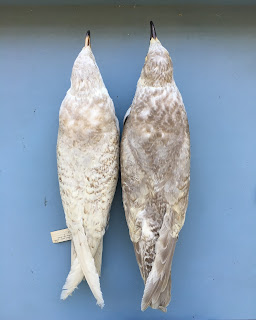 White-wingers. The jewels of the large white-headed gulls! I was taken aback by how small and svelt this Glaucous Gull is (left). Yes, the bird on the left is a female barrovianus. This is the smallest race, Larus hyperboreous barrovianus, with trinomial associated with Barrow, Alaska.

Can you guess what species is on the right?

The rest of my time looking through the collection was devoted to examining Glaucous-winged hybrids (both putative Glaucous-winged x Herrings and Glaucous-winged x Westerns). I'll be visiting British Columbia later this year and hope to put together a post specifically on these hybrids. More on that later. Best regards!

A special thanks to Kimball for his hospitality and sharing his insights on some of the specimens!


at October 09, 2017
Email ThisBlogThis!Share to TwitterShare to FacebookShare to Pinterest

A Note on Primary Molt in Yellow-footed Gulls

Primary molt in North American large white-headed gulls is fairly straight forward. Most species commence p-molt by first dropping the innermost primaries and then distally replacing the remaining feathers until p10 is renewed and fully grown. This typically occurs by way of the prebasic molt.
﻿﻿﻿﻿﻿
Quite exceptional is when primaries are actively growing via one molt (i.e., the prebasic molt), when then an independent molt simultaneously crops up and initiates another wave of primary growth. The latter has traditionally been attributed to an extensive prealternate molt.

One large white-headed gull that is thought to undergo this alteration, to some degree, is Yellow-footed Gull (L. livens). Several workers have noted this phenomenon in the literature (Pyle 2008, Howell 2010). However, few exemplars or specifics have been given, particularly from the Fall season when both prebasic and prealternate molts regularly overlap.

Below are several examples of adult-type Yellow-footed Gulls that exhibit two waves of primary growth. All are from the Salton Sea in southern California during the last week of September. It's presumed these birds originated from Baja California where the species breeds and then makes a post-breeding dispersal into the Colorado Desert. No assumptions are made as to whether these individuals have successfully bred and/or their exact ages.

Individual 4
These photos are meant to provide concrete examples of dual-wave primary molt in Yellow-footed Gulls, as well as stimulate further study on this topic.

A special thanks to Peter Pyle for patiently entertaining my questions on this subject. His knowledge is most inspiring.
at October 03, 2017
Email ThisBlogThis!Share to TwitterShare to FacebookShare to Pinterest
Newer Posts Older Posts Home
Subscribe to: Posts (Atom)