at October 01, 2019
Email ThisBlogThis!Share to TwitterShare to FacebookShare to Pinterest 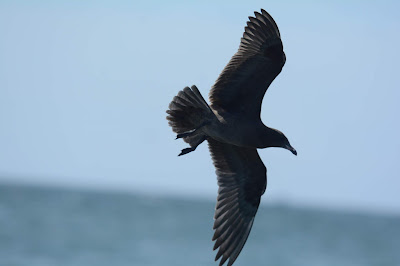 Age: Although the details of this dark, somewhat backlit individual are difficult to make out, the outermost primaries appear pointed enough, and tail feathers dark enough, to suggest 1st cycle.

Identification: It is obvious this gull is genuinely dark. What appears to be a sooty brown plumage isn't strictly a function of lighting conditions. The uniformly-filled undertail coverts and vent region reinforce its true darkness. The legs look black, and although lighting may be influencing this, they certainly don't look pale or pink. The bill is medium size with a fleshy base, complementing a relatively skinny neck and head. The wings appear narrow and noticeably long. The only regularly occurring North American gull that fits in this case is a young Heermann's Gull. A juvenile California Gull may cause confusion momentarily, but the undertail coverts and leg color don't work for even the darkest California Gull.

Our September bird is a juvenile Heermann's, photographed off the coast of Washington in August. From some 1800 Heermann's seen along the coast in late August, this was the only juvenile we encountered.
at October 01, 2019
Email ThisBlogThis!Share to TwitterShare to FacebookShare to Pinterest
Newer Posts Older Posts Home
Subscribe to: Posts (Atom)