The Colonel. That's the name we've given to the presumed hybrid Laughing x Ring-billed Gull that has frequented the Illinois/Indiana lakefront since at least 2004. After having searched for this bird a number of times this year, I finally tracked it down yesterday at Calumet Park in Chicago.

It flew in from the old power plant property in Hammond, Indiana, landed on the pier after getting a bit comfortable, and then flew back whence it came from.


So how are we really sure this is a hybrid with Laughing and Ring-billed genes? We're not and probably never can be without genetic data, but the phenotype matches that mixture of parents well (more here). The working theory behind this bird is that back in 2002 - when a Laughing Gull successfully nested with a Ring-billed in the Lake Calumet colony in Chicago - hybrids were produced, and shortly after some "weird" Laughing Gulls started appearing near a Kentucky Fried Chicken on the Chicago/Hammond city limits. The KFC connection is where we get the name "Colonel" from. Incidentally, that breeding occurrence was the first state nesting record of a Laughing Gull in Illinois. Given those circumstances, and the appearance of this bird, I don't think it's a stretch to assume this hybrid candidacy.


It's always tougher spotting this bird in basic plumage, and I imagine it goes overlooked by some observers in the winter season. Here's what it looks like in fresh, alternate plumage:

﻿
at August 22, 2016
Email ThisBlogThis!Share to TwitterShare to FacebookShare to Pinterest 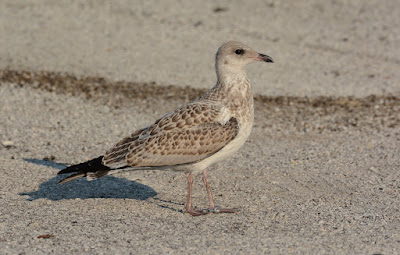 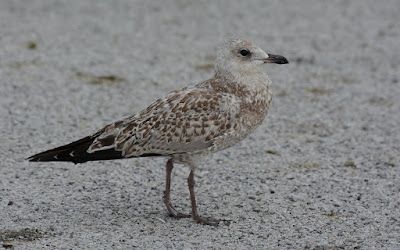 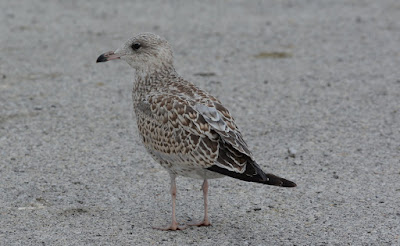 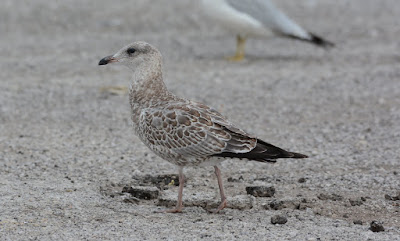 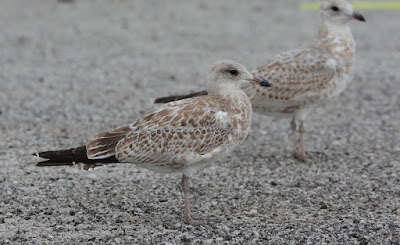 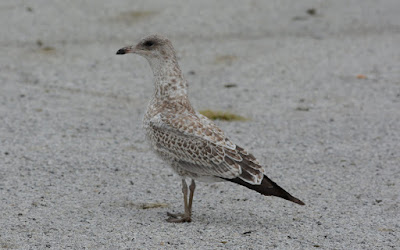 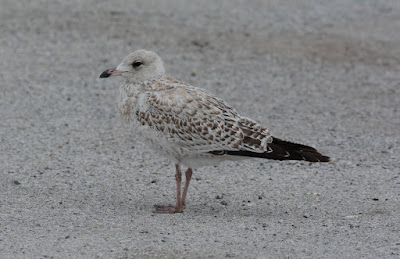 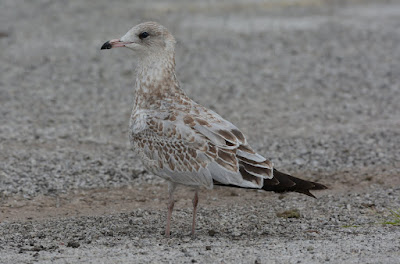 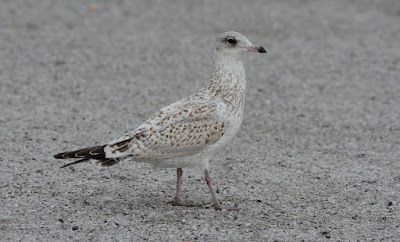 at August 11, 2016
Email ThisBlogThis!Share to TwitterShare to FacebookShare to Pinterest

Last week I spent a couple of days checking sites in Ottawa County, Michigan, mainly centered around Holland State Park. I was particularly interested in what Herring numbers were like and if any lingering "northern" gulls were to be found.

I stumbled on a couple of GBBGs (2nd and 4th summer type), 1 LBBG (1st summer) and, surprisingly, only 4 juvenile Herrings from some 275 individuals. 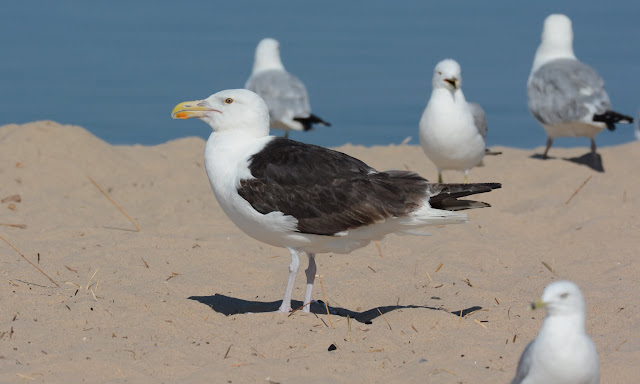 The single mirror on p10 and absence of a p9 mirror suggests a younger bird. The brownish greater primary coverts also point away from a definitive adult.


My only Lesser Black-backed Gull, a species that I thought I'd see more of on the west-central Michigan lakefront:

There was no shortage of 1st summer Herrings, including this individual retaining an all-black bill: 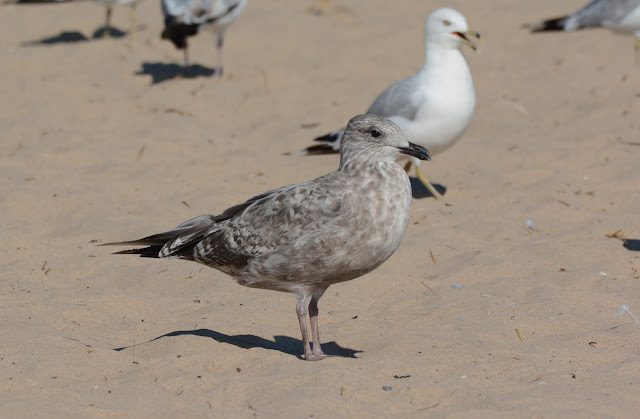 at August 11, 2016
Email ThisBlogThis!Share to TwitterShare to FacebookShare to Pinterest

at August 01, 2016
Email ThisBlogThis!Share to TwitterShare to FacebookShare to Pinterest

The immaculate, fresh, plumage is all juvenile (i.e., 1st basic). The pale edges to the upperparts and pointed primary tips reinforce the fact that these are all 1st generation feathers.

I don't blame those folks who identified this month's bird as a young Thayer's Gull - indeed, there may be some thayeri that match this. But this isn't a Thayer's.

I identified this month's quiz bird as a juvenile American Herring Gull. The bill seems petite and shorter than usual, although that's likely because it's still growing. Notice how the base of the lower mandible is paling - a subtle hint that this may not be a Thayer's as that species does a better job of keeping a black bill at this age than other large gulls (but it's not terribly uncommon for a 1st cycle Thayer's to show a paling bill, especially late in the winter season before departing north). In Thayer's, the outer primaries are typically paler than the "almost black" appearance seen here, and the edges to those primaries are paler - often more so than the quiz bird. Also, most juvenile Thayer's will show tertials that are a smidgen paler than this.

Here's a more typical appearance for a similar-aged Thayer's Gull:

Note that the outer primaries are more brown (compare with the black bill), with paler proximal edges. The upperwing coverts, too, look more marbled and frosted than in most juvenile Herrings.

The reader will note that the plumage aspect seen on our Herring Gull is one that soon becomes uncommon as December approaches, and certainly so later in the season. We do, however, see some American Herrings that retain this fresh plumage aspect later in the winter, and it's believed these birds - with more durable juvenile plumages - have likely originated from more northern latitudes. Here's one such bird found all the way south in Florida in late January:

Structurally, the bird is plump and the head is large and blocky, complemented by a heavy bill. The primaries are dark - darker than the bill. Not much about this bird suggests Thayer's Gull.

My purpose in selecting a fresh juvenile Herring for this month's quiz is two-fold: To point out just how immaculate some juvenile American Herrings can look in their hatch year, and two, to emphasize the importance of how a date can greatly aid in the identification process. Without a date, it's difficult to gain any appreciation for seasonal factors such as molt and wear.
at August 01, 2016
Email ThisBlogThis!Share to TwitterShare to FacebookShare to Pinterest
Newer Posts Older Posts Home
Subscribe to: Posts (Atom)