I found my first juvenile Thayer's of the season yesterday - bittersweet looks at a bird that fled almost the second I spotted it. 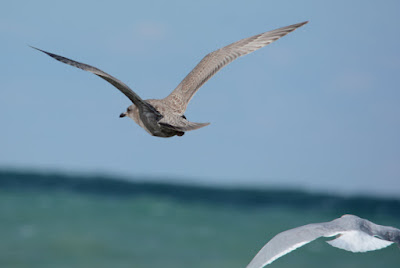 There were also 2 adult Thayer's present (bringing my total to 11 distinct Thayer's in the last 2 weeks). Both of the adult types were without P10, a much more typical molt state for our earliest arrivals here on southern Lake Michigan.

I've stopped counting adult-type Lesser Black-backeds at this point. From here on out, the only adult LBBGs that I count at this site, for the rest of the season, are distinct and obviously "new" arrivals.

Out of the 4 birds present yesterday, a 3rd cycle type and a juvenile were "new" birds that I've not seen this season.

Compare the bird above with this one from last weekend in Lake County, Illinois:

Meanwhile, I eagerly await our first Iceland & Glaucous Gulls of the season...

at October 18, 2015 No comments:
Email ThisBlogThis!Share to TwitterShare to FacebookShare to Pinterest

With regard to Franklin's Gulls, back in October of 2010, I wrote, "Tracking weather systems for this species is for the most part reliable and predictable. The ideal parameters involve areas of low barometric pressure with a strong west to northwest wind with the passage of a cold front". I called these systems, "Franklin's Fronts".

Those conditions setup perfectly late Sunday night, and by sunrise, reports of this species were pouring in from the southwest Great Lakes region. The Chicago lakefront saw close to 100 birds on the Lake Michigan shoreline - that's a great count for Northern Illinois. I found 5 birds inland, in a parking lot in Lake County, Illinois. Oddly, this same parking lot is where I go to search for winter gulls - Thayer's and such - but not hooded species. I did find 4 adult-type Thayer's (for a total of 8 so far this month!) and 2 Lesser Black-backeds (adult & juvenile).

All of the photos below were taken in Lake County, Illinois on 12 October 2015. 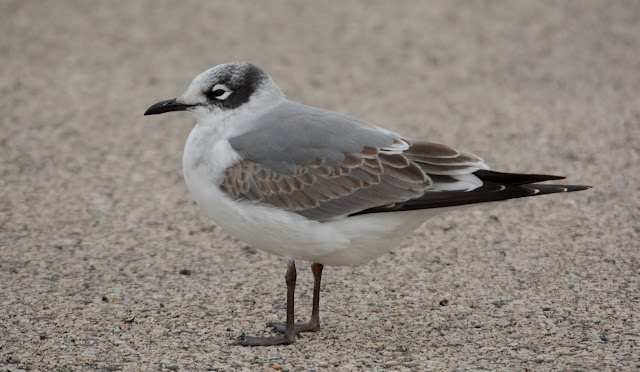 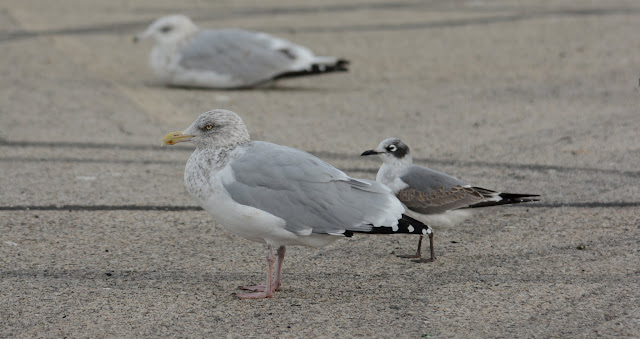 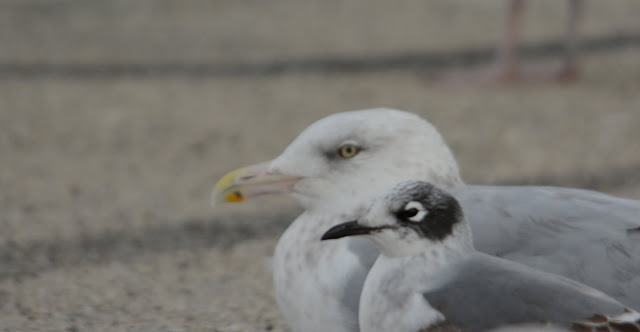 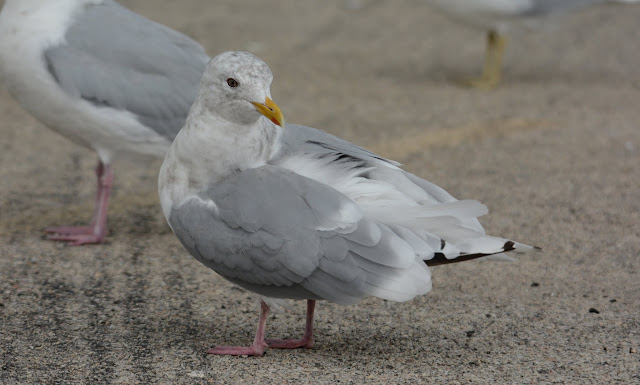 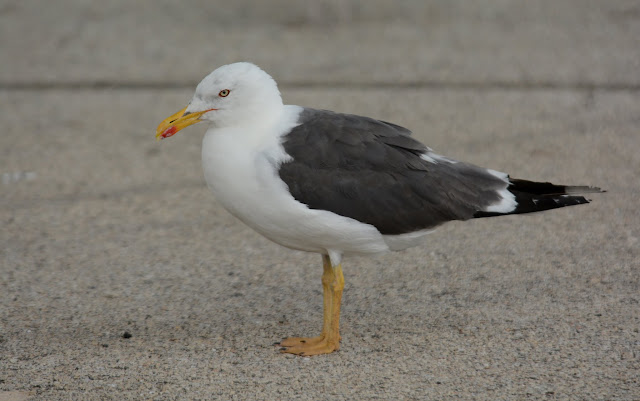 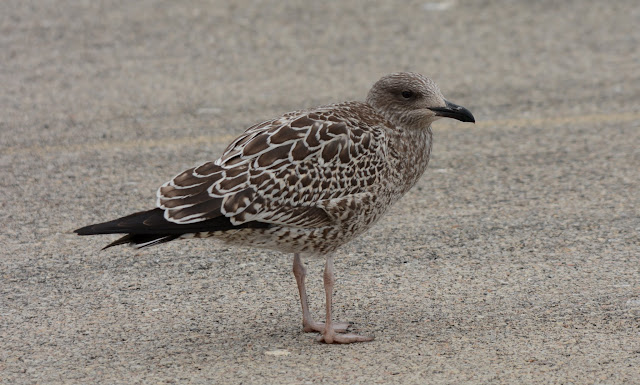 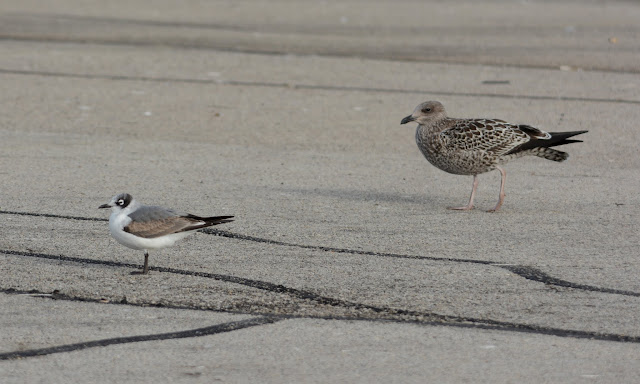 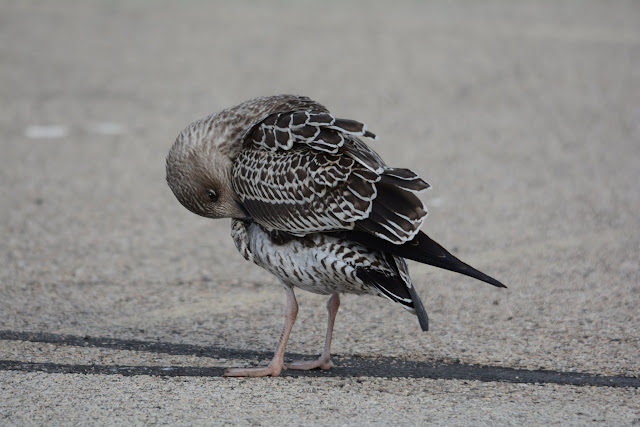 at October 13, 2015 No comments:
Email ThisBlogThis!Share to TwitterShare to FacebookShare to Pinterest

I was happy with finding an adult Thayer's last Sunday (04 October 2015) and mildly wrote it off as a fluke - an early arrival for our region. Yesterday, 09 October 2015, I found 3 more adult types in Berrien County, Michigan, some 85 miles to the southeast.

All of the photos below were taken in New Buffalo, Michigan on 09 October 2015.

I used to think seeing this species on southern Lake Michigan during the first half of November was "early". I then learned late October is a good time to "start" looking for them. This is actually the first year I've made an effort to look for them in early October...and here we go. I'll have to see what next year brings!

The putative Chandeleur Gull was present as well. Note the following photos are underexposed and the upperparts appear darker than usual, as you can gauge by looking at the Herrings:

Here's a more balanced image of the upperpart color (compare the contrast of the black wingtip with the rest of the wing):

Would I bet the farm that this is unquestionably a Chandeleur Gull? No. Would I bet half the farm? Yes.

Lesser Black-backeds have peaked on southern Lake Michigan. I've noticed for the last 2 years that they arrive in good numbers in early Fall but then drop off by early December. We may have a North American population that's not as hardy as our Herrings, moving south as soon as we get our first freeze. The fact that their winter stronghold is in Florida may agree with this notion. Although admittedly, there may be several factors that contribute to why this species has favored the Florida coastline in winter.

at October 10, 2015
Email ThisBlogThis!Share to TwitterShare to FacebookShare to Pinterest

This first weekend of October was eventful and full of interesting gulls, to say the least. Let's start with the title birds - straightforward and no ID issues.

Somewhat of a surprise is this adult Thayer's. I have always looked for Thayer's in early November and late October, but seeing that states to our north (particularly Duluth, MN) see them as early as late September, I purposefully decided to go looking for Thayer's this weekend.
﻿
Notice p10 is still hanging on. Usually, when we see our first adult THGUs, they've dropped p10 and are about halfway done growing p9 with small hints of the tip to a new p10.

Next up was my first juvenile Lesser Black-backed for the season (adults and sub-adults have been here for at least a month): 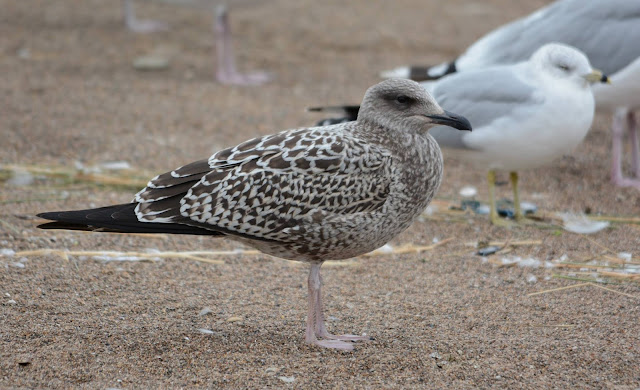 It's interesting that sites to our east (southern Ontario and New England) begin reporting these juveniles the first week of September. I usually don't find my first juveniles until about mid-October.


Now for my "interesting" gulls. This first individual tripped me up for a few hours, leading me to think it may be a California Gull, but I've retracted that ID. I believe it's a somewhat atypical Herring or perhaps even a CAGU x HERG (a hybrid that's now being reported with some regularity in Colorado): 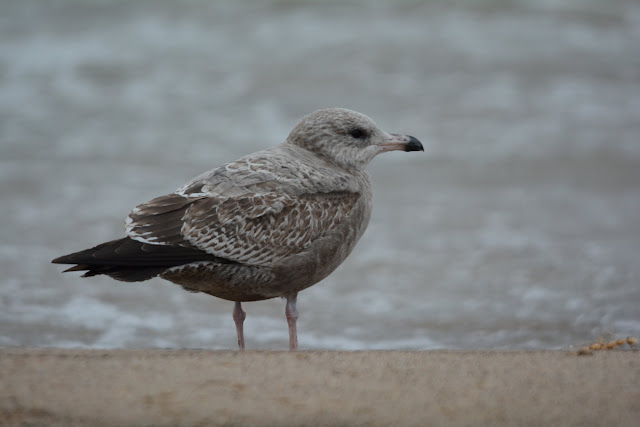 The medium gray scaps have dark-centered shaft streaks and overall did not look like any Herrings I've been seeing (until the day after, of course). The bicolored bill is small, the gape appears to frown down (like CAGU) and the tibia shows hits of blue.

I suppose everything on this bird can be found in typical Herrings, but there was something about it - an initial instinct - that looked different, structure and size too. Unfortunately, it was raining, windy and my autofocus wasn't working (and still isn't), so no flight shots. It did appear to have inner primaries that lightly contrasted with the outers, but not a full-blown pale window that is generally found in Herring Gull. I don't recall it having a strong "second" secondary bar formed by dark greater covert bases.

Some history: I've found 3 California Gulls at this site in the last few years (all in October). It seems this is the month they move in with the Herrings. I'm under the impression that there may be some young individuals that are hybrids/backcrosses (perhaps from Alberta or thereabouts) that are migrating with the larger parent species. This may all sound like a stretch, but if putative adult hybrid CAGU x HERGs are being found, I think it behooves us to put young birds on our radar. Here's an example of an adult hybrid:  http://goo.gl/Qmvwqh


I've identified all of the individuals below as Herring Gulls, some less obvious than others. Al of these birds were photographed in Lake County, Illinois on 04 October 2015. 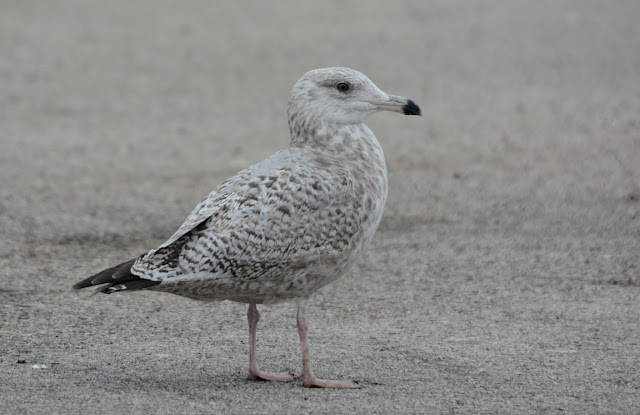