Wes Serafin and I ventured up to the Wisconsin lakefront on Friday to look for summer gulls. Our most interesting bird for the day was this putative 4th cycle type Great Lakes Gull (Great Black-backed x Herring). 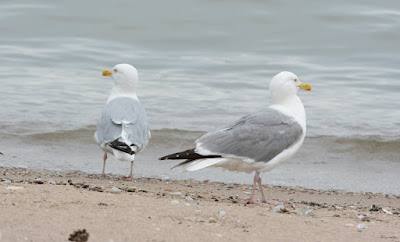 There's at least one other theory beside the hybrid possibility: A sub-adult Herring that has darker upperparts than a definitive adult. 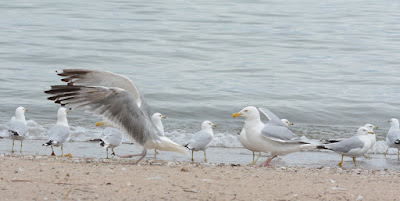 Size and structure wasn't too helpful as the bird was also within range for Herring, although a bit bulgy (think Great Cormorant bulgy...). But then again, the presumed Great Lakes Gulls I've seen have ranged in size from Herring to typical Great Black-backed...

I think it may be best to leave this individual unidentified.

It's unusual to have more than 1-2 Franklin's on Lake Michigan in the summer months, and so the 7-8 birds that have been in the Manitowoc impoundment since late May are quite special. All appear to be 1st summer individuals (~ 1 year olds), undergoing their 2nd presbasic molts.

This individual nicely shows an "average" molt pattern seen on this contingent of FRGUs.

FRGU #1
The thinking behind 1-year olds like this is that they migrated to South America last fall, molted their juvenile (1st basic) flight feathers via a complete prealternate molt (PA1). Soon after acquiring these 2nd generation primaries (1st alternate), the 2nd prebasic molt commences, and viola, a 3rd generation of primaries (P1-P6) and secondaries are grown. It's possible that PB2 begins on the winter grounds, during migration stopover sites or once the "breeding" grounds are reached. This is what makes Franklin's Gull a standout gull - the flight feathers (especially in adult birds) are replaced twice in roughly 12 months!

But then there are Franklin's - for reasons we don't know, and probably will never know - that don't molt any flight feathers in PA1 on the winter grounds, or may have incomplete/suspended PA1 molts when we see them in their 1st summer.

It's suspected these absent/incomplete PA molts are tied to the amount of food (or lack thereof) on the winter grounds, but I digress. Back to the Manitowoc birds...this one decided it wanted to renew p8-p9 before growing p6, or dropping p7 altogether!

FRGU #2
I've labeled what I presume is happening here:

My favorite Franklin's of the group, this individual showing 3 generations of primaries.

FRGU #3
P-molt in this age group of Franklin's Gulls in the summer months is somewhat variable. It's too bad we don't have more detailed profiles of known-age, banded, birds from the colonies they're born in. This would be a great project for anyone interested in molt and gulls!!
at July 20, 2016
Email ThisBlogThis!Share to TwitterShare to FacebookShare to Pinterest

at July 01, 2016
Email ThisBlogThis!Share to TwitterShare to FacebookShare to Pinterest 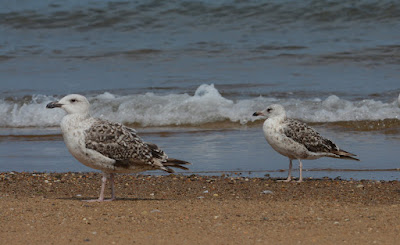 Both of our gulls appear to have mostly new upperparts, although notice some feathers have been dropped and others are actively growing (namely, lesser/greater coverts and lower tertials on the left bird). The tertial patterns appear to be 2nd generation on both individuals, but the outermost primaries that are visible have an old "brownish" aspect. These primaries are juvenile feathers (=1st basic). Therefore we can comfortably assume both birds are molting from 1st to 2nd cycle and are roughly a year old (2nd calendar year).

The disparity in size among these two individuals will most definitely be a deciding factor in assigning labels. The gull on the left has a genuinely hefty bill and legs with remarkable girth. The head is proportionally large and the body is reminiscent of a duck. All of these structural features, along with the ghost-white head and solid dark upperparts point directly to Great Black-backed Gull. The bird on the right looks like a mini version of the Great Black-backed but with a slimmer bill and more attenuated look to the rear - a classic Lesser Black-backed type. The heavy "grease" stain (or neck boa) on the lower hind-neck of the Lesser Black-backed is often present in this age group.

This photo was taken in Barnstable County, Massachusetts in mid-July.