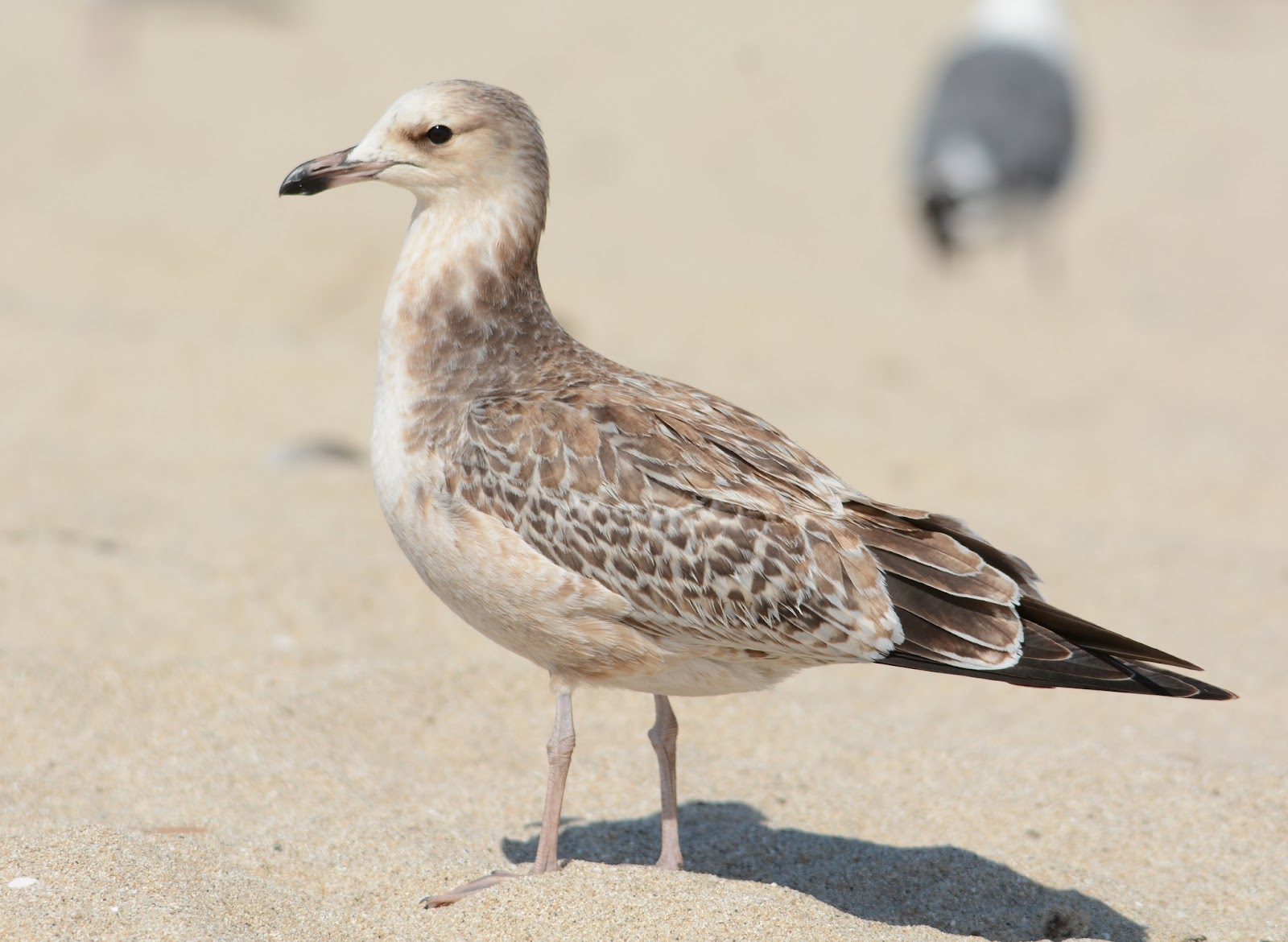 Most gull identifications are tied to age, so let's begin by establishing that. The all-brown scapulars, dark-solid tertials, and relatively neat upperwing coverts all belong to a juvenile bird. The pointed primary tips and mostly black bill also aid in ageing this individual.

We don't have any reliable references for size comparisons in the photo, but this appears to be a medium sized gull (smaller than a Herring Gull). The attenuated look to the wings helps narrow it down to a few species, but much more telling is the strong "cinnamon" color throughout which is only shown by two North American gull species: juvenile Ring-billed and juvenile California Gull (much more common on the latter). The bleached appearance to the chest, neck and forehead, as well as the straight tubular bill and decurved gape expression make this a pretty solid California Gull.

This plumage aspect is not uncommon among juvenile California Gulls - loosely named "Cinnamon Types". Photographed in mid-September in San Mateo County, California.
at January 31, 2015
Email ThisBlogThis!Share to TwitterShare to FacebookShare to Pinterest

I got out to the Indiana lakefront today. It didn't take long for me to be reminded of what great gull-watching we have here on Lake Michigan in the winter season. It's not so much the number of gulls, but rather the variety that impresses me. In less than an hour I had Thayer's (4), Kumlien's (1), Glaucous (4), GBBG (32) and LBBG (2) checked off for the day. There was also a Thiceland Gull. Yes, a Thiceland...

Looks mostly like a Thayer's Gull, but the two outer primaries are suspiciously pale. The mirror on p9 also extends across both vanes from edge to edge. All of this would've been fine until I saw it side-by-side with Herrings and Ring-billeds. 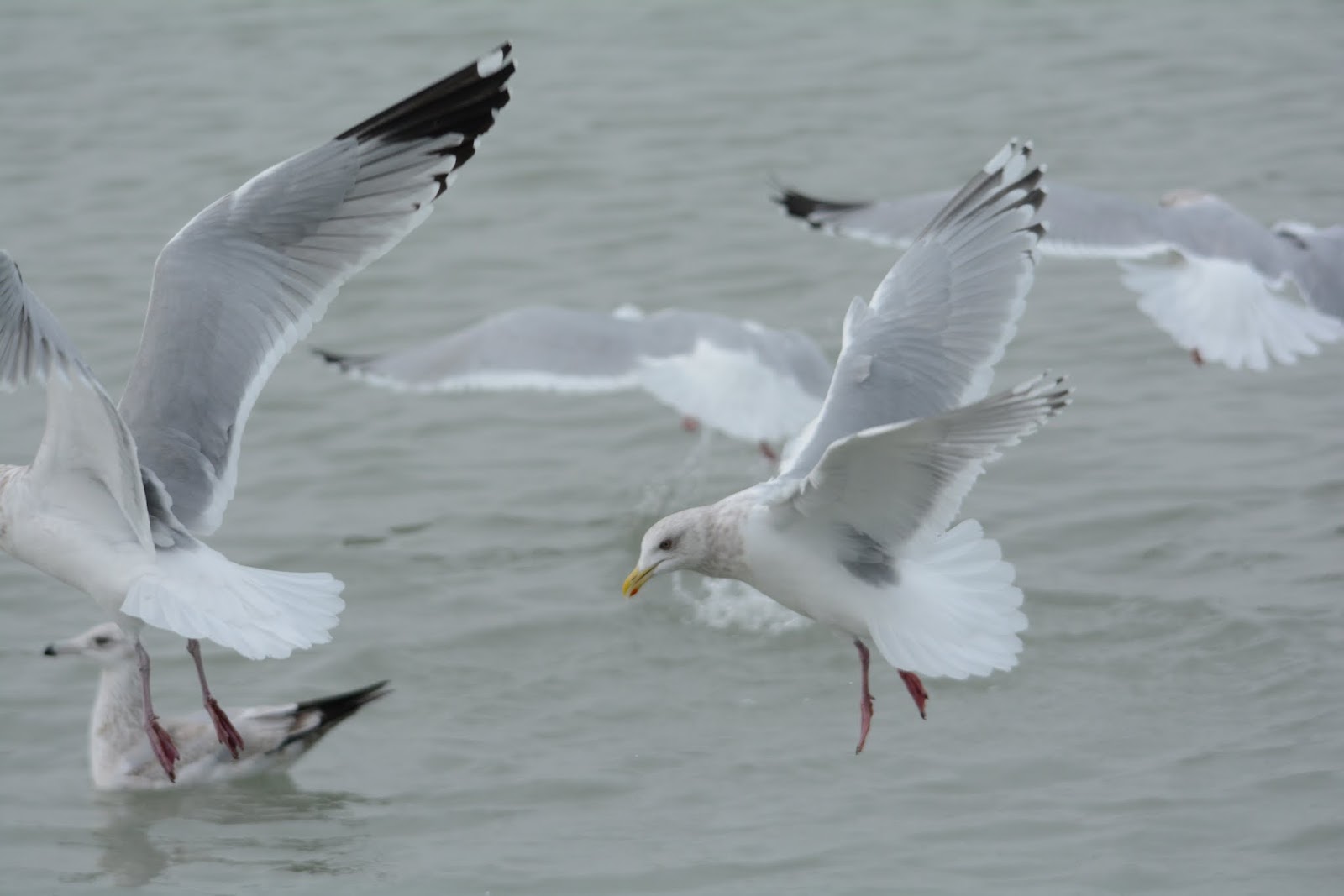 That wingtip is too pale for my taste and I don't feel compelled to call such birds Thayer's Gulls. So why not a Kumlien's? Mostly because of the full band on p5. Of 345 sampled Kumlien's, Howell & Mactavish noted only 17 with subterminal markings on p5, "but never a complete subterminal band". They go on to say that altough none of their sample showed a complete band, it does occur, "albeit rarely". My bird also shows black bleeding onto the inner web of p9, and the "fullness" of the subterminal bands from p8 down to p6 make me even less willing to call it a Kumlien's. So by Lake Michigan standards, we'll keep this bird in the "intermediate" file.

I also had a neat 3rd cycle Thayer's with pale eyes - my 24th third cycle type Thayer's in the Lake Michigan region this season.

at January 31, 2015
Email ThisBlogThis!Share to TwitterShare to FacebookShare to Pinterest

What this all means when trying to narrow down migration distances (or subspecies) is yet to be learned. But there is an ID implication that should be kept in mind: adults with primaries not fully grown appear shorter-winged. The overall impression of wing structure on standing birds is similar to American Herring (at least this would be so earlier in the season. Hence, there's potential for confusion where points may be given to a "hybrid" over pale-end graellsii. To make matters more interesting, some of these adult types may show leg color with pinkish tones.
at January 31, 2015
Email ThisBlogThis!Share to TwitterShare to FacebookShare to Pinterest

I never pass up the chance to watch Herrings, especially when I find myself away from Lake Michigan. While in east-central Florida last week, I photographed a mixed array of wingtip patterns on adults - some that resemble what I think of as "Great Lakes Herrings" and others with less pigmentation to the wingtips (larger birds that I associate with having a Northern or Northeastern place of origin).

The first two individuals seen below were the most extreme in terms of limited pigmentation in the wingtips, and look very much like so-called Newfoundland Herrings.

Notice on this bird the large apicals on the outer primaries and the large amount of white on p6 and p9.
I knew I'd be impressed when this bird opened its wings: complete white tip to p10 and no subterminal band or marks of any sort on p5. Apparently, the lack of any markings on p5 is not too uncommon in St. John's (Mactavish, pers. comm.). Mactavish & Jonsson include a similar bird in Photo 5 in their article on Niagara Falls versus Newfoundland Herrings (Birders Journal, V10 N2).

This one shows less black on the bill, but similar-sized apicals:

P10 shows light black to the edges of both webs and p5 a very faint bar:


Now for beach birds - all photographed at Daytona Beach Shores in Volusia County.


at January 29, 2015
Email ThisBlogThis!Share to TwitterShare to FacebookShare to Pinterest

It seems Green F05, or Pierre, couldn't stay away from me. I've found him at Daytona Beach Shores on four consecutive days in the last week. I had no choice but to get a little artsy with this photo opportunity I had last Sunday.

You can read more about Pierre's legacy, here.
at January 28, 2015
Email ThisBlogThis!Share to TwitterShare to FacebookShare to Pinterest

With literally over 50,000 Laughing Gulls to pick through in Brevard and Volusia Counties last week, I was able to find a couple of birds that stood out in the ranks. I give you an "anomaly" and an "aberrant".

This first bird shows aberrant bare-part coloration. This orange-red color problem has been documented in the literature and doesn't appear to be too uncommon with Laughing Gulls. For whatever reason it tends to be found more in this species than other dark-legged hooded gulls. This next individual has molted into a complete hood in the middle of winter - a real anomaly: 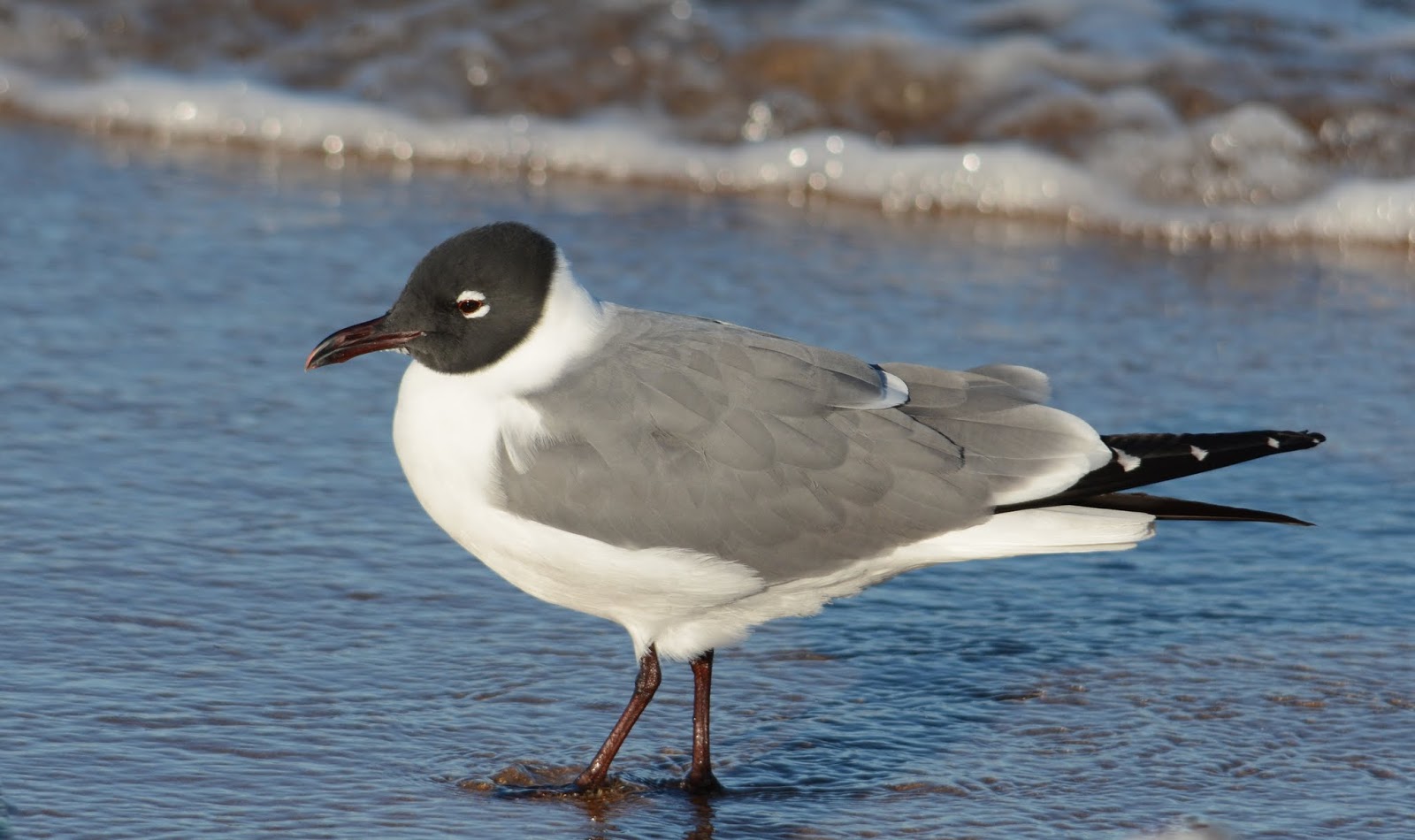 I've seen Bonaparte's with full hoods in late Fall and have seen photos of Franklin's with complete alternate hoods in winter (birds that perhaps had breeding hormones triggered a bit prematurely), but this was my first LAGU with a black head in winter. Stunning to say the least!
at January 27, 2015
Email ThisBlogThis!Share to TwitterShare to FacebookShare to Pinterest
Newer Posts Older Posts Home
Subscribe to: Posts (Atom)