Bruce Heimer and I made the 3-hour jaunt for this one. It didn't take much to convince me as I bird this site multiple times in the Spring/Summer.

Here's my lousy photo of the tern:
﻿
And of course a few Littles:
﻿
Most of the LIGUs found here are 1st summer birds. An apparent adult was reported moments before we arrived. We never did see it, but photos confirm at least 5 LIGUs were present this past weekend, including a 1st cycle with an almost full hood, decked out with pink blush throughout.
﻿﻿

This one here was hawking insects over the impoundment for a few moments: 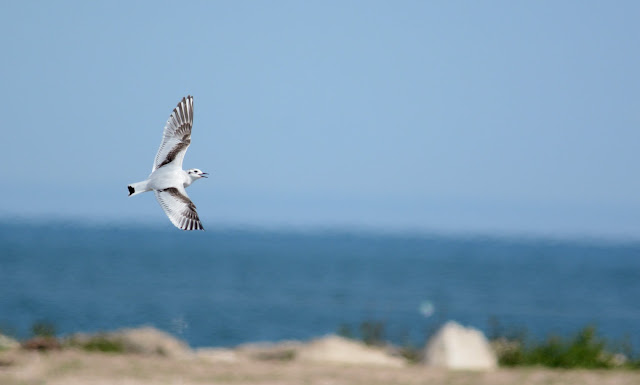 Beside hawking insects over the lake, the birds are here feeding mainly on dying alewives. Here's a glimpse of a small segment of the group flushing: 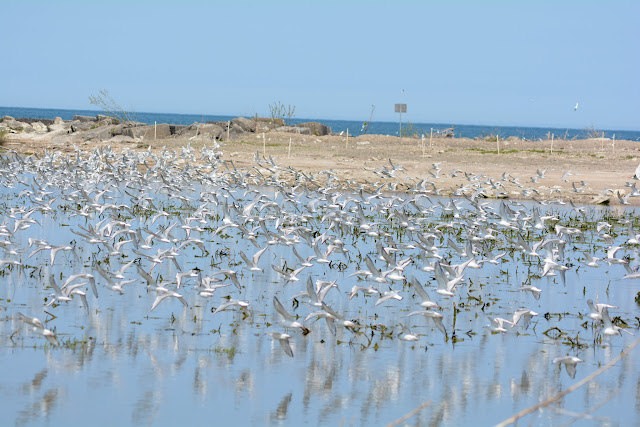 It's nice to see these diminutive, tern-like, gulls with their smaller cousins. Their feeding preferences, fight patterns and breeding habitats are much more alike when compared to those of the larger gulls.
at May 24, 2016
Email ThisBlogThis!Share to TwitterShare to FacebookShare to Pinterest

1st cycle Ring-billed Gulls typically begin their prebasic molt in mid-May. The molt is initiated, or at least detected, by the dropping/replacement of the innermost primaries.


This individual has dropped a few secondaries and a couple of primaries:

Interestingly, p7 on the left wing is 2nd generation. This feather has an odd-shaped tip that's emarginated. It's also a bit worn. It very likely replaced an accidentally dropped juvenile primary (as opposed to being part of the current primary molt). Note p7 on the right wing is still juvenile (1st basic).

Most adults haven't begun dropping/replacing primaries or rectrices yet (i.e., the prebasic molt). They begin molting almost an entire month (or two) later than 1st cycles. The demands of courting, pairing up and nesting are taxing enough and hence molt is delayed.
at May 22, 2016
Email ThisBlogThis!Share to TwitterShare to FacebookShare to Pinterest

It's Spring. Large white-headed gulls have been wearing their juvenile flight feathers for nearly an entire 12 months. By now, many are showing primaries that are worn, faded, and yes, bleached.

The individual to the left is showing typical, dark primaries that appear to be in very good condition. The bird to the right has primaries (and tertials) that have a light brown coloration. These feathers appear diluted in color because of bleaching. Both birds are the same age, except the individual to the left hasn't suffered the effects of bleaching. 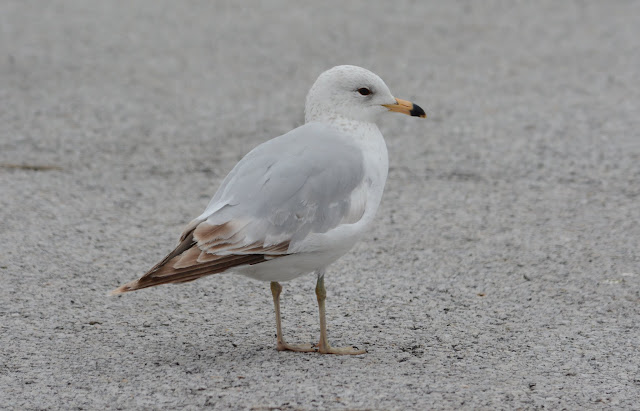 The implication here is that some birds may not be safely identifiable at this time of year only because of this ambiguity of "true" pigment.
at May 03, 2016
Email ThisBlogThis!Share to TwitterShare to FacebookShare to Pinterest

at May 01, 2016
Email ThisBlogThis!Share to TwitterShare to FacebookShare to Pinterest
Newer Posts Older Posts Home
Subscribe to: Posts (Atom)