A quick note on 1st cycle Bonaparte's and their tail bands. Specifically, what is the pattern on the outer rectrix (R6)? Does the blackish band extend onto the outermost feathers? Seems like a simple question.

In their account on "juveniles", Olsen & Larsson describe T6 (=R6) as being white with white tips. But in the "first summer" account, they imply the outer tail feather does have black markings. This is somewhat confusing and should be clarified.


Howell & Dunn, however, note that some pigment is found on the outer tail feathers, but limited to the inner webs.


Looking through tens of 1st cycles in my photo collections, I mostly agree with Howell & Dunn, that on average, when there is black on the outer tail feathers (which is rather common), the black is generally limited to the inner web. But not always. Some individuals clearly show pigment beyond the feather shaft.


Interestingly, when viewing the ventral side of the tail on those individuals with pigment on R6, it usually appears there's more pigment from below than above. This, I suspect, is mainly because the inner webs of the outermost tail feathers are more visible when viewed from underneath. From above, the outer webs are more exposed.


As I've found with 1st basic Franklin's, Black-legged Kittiwakes, Little and Laughing Gull, the pigment on the outermost tail feather appears to be more variable than generally thought. I suspect the same might hold for other species such as Sabine's and Black-headed Gull.
at May 29, 2017
Email ThisBlogThis!Share to TwitterShare to FacebookShare to Pinterest

Late spring through early summer often brings good gull diversity on the Wisconsin, Lake Michigan lakefront. Here, I can often find a few straggling northern species along with hooded migrants. Last Sunday was a great demonstration of this phenomenon with 10 species between Port Washington, Sheboygan and Manitowoc. Couple this with hundreds of sub-adult Herrings in high molt and the hours spent here are well worth any gull-watcher's time and effort.

The highlight for me was this hyper-melanistic 1st cycle Bonaparte's. I've seen 5 or 6 of these now, with this bird being the most cooperative. Although they're reported annually, these types are rare enough to make one do a double-take. 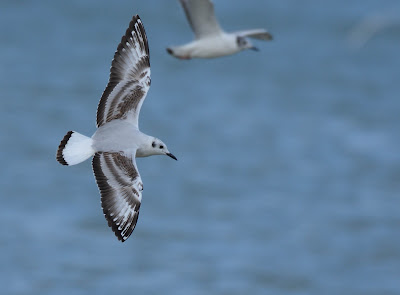 at May 27, 2017
Email ThisBlogThis!Share to TwitterShare to FacebookShare to Pinterest

at May 06, 2017
Email ThisBlogThis!Share to TwitterShare to FacebookShare to Pinterest
Newer Posts Older Posts Home
Subscribe to: Posts (Atom)