Age: This month's quiz is timely with many gulls in the northern hemisphere now beginning to replace flight feathers. Undergoing a complete molt, this individual has renewed most of its primaries which have an adult-like pattern to them. Overall the upperwing and tail are far from "definitive adult" and so it is perfectly fine to assume the newer flight feathers that have come in are 3rd generation. Thus, this is the 3rd plumage cycle and the complete molt here is the 3rd prebasic molt. The old retained primary (p10) is 2nd generation.

Identification: The brownish cast to the upperparts impart a darker feel than is typical of this species. Focusing on the new primaries, it is apparent that we're looking at a paler gray species. The bill is on the heavy side, but proportionately sized with the head. The eye appears dark, but zooming in shows much speckling and paling -- this helps rule out California Gull. The wide and complete tailband, and bill pattern, are wrong for a Ring-billed Gull, among several other features. The only reasonable identification for this pink-legged, pale, large white-headed gull, is Herring Gull.

at May 31, 2020
Email ThisBlogThis!Share to TwitterShare to FacebookShare to Pinterest

at May 01, 2020
Email ThisBlogThis!Share to TwitterShare to FacebookShare to Pinterest 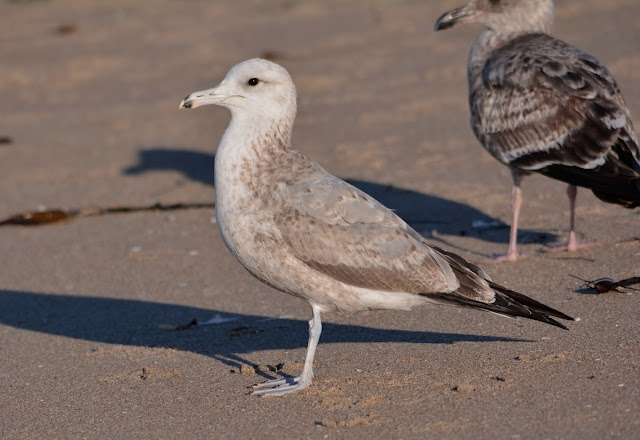 Age: An apparent large white-headed gull that appears to be beyond its 1st cycle. Notice the marbled inner greater coverts and lower tertial edges. Also, there appears to be three generations of median coverts. The mid median coverts are oldest. These worn and frayed feathers are likely 2nd basic. The outer median coverts are fresher and may have come in with a later 2nd prebasic wave (along with the lesser coverts). The darker gray inner medians are very likely 2nd alternate. All in all, the upperparts do not fit a 1st cycle. It's difficult to make out primary-tip shape or patterns, but the very small and indistinct white tips to p6-p7 on otherwise black primaries are expected on 2nd generation flight feathers.

Identification: This is a four-year gull with an apparent long wing projection, prominent gape with a "frown", a dark post-ocular line, pinched in forehead, straight tubular bill with a familiar distal-black, proximal-red pattern on the tip, bluish tibia, heavy lower neck markings, and medium gray upperparts coming in. The gull in the background is a heavy-billed Western Gull giving us a very good sense of overall body size and shape. I hope by now you've settled on California Gull if you were unsure about our April quiz. Many people nailed this one without a problem this month but were tripped up by plumage/age. One final note on that, notice the very tip to the bill. In 1st cycles, the tip is typically all black, similar to that we see in many 1st-2nd cycle Glaucous.