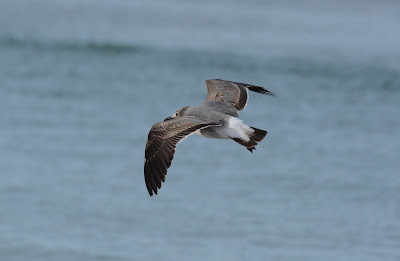 Identification: This is a hooded species with obvious eye-crescents. The dark-gray mantle and scapular feathers eliminate paler species such as Bonaparte's, Little and Sabine's Gull. Although not discernable from this single photo, the bill and body size should aid in the elimination process when observed in the field. The only reasonable choices for this 1st cycle gull are Franklin's and Laughing. 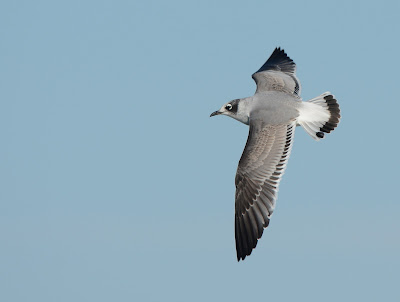 First cycle Franklin's show a silvery gray wash across the greater coverts - and perhaps diagnostic - white outer edges to the outermost rectrices. Overall, this species will show whiter underparts and hindeck earlier in the season than Laughing. Finally, Franklin's will often show a much more demarcated semi-hood and wider eye crescents than similar-age Laughing Gulls.

at June 30, 2017
Email ThisBlogThis!Share to TwitterShare to FacebookShare to Pinterest

We often see Peregrine Falcons buzzing flocks of gulls and then half-heartedly aborting and changing their intent for reasons unknown to us. Yesterday while wedged between two large boulders on the Manitowoc lakefront, I patiently sat for almost 3 hours admiring a few Little Gulls in a sizable feeding flock of 500+ Bonaparte's Gulls. Suddenly, ALL of the birds took to the air and headed east over the lake in unison. The birds moved with such urgency that I knew the only predator that can elicit such fear is a Peregrine Falcon. Not wanting to be discovered, I remained still and didn't raise my gaze. A few seconds later the falcon zipped right past me, some 75 feet out, and snatched a 1st cycle bird in midair as it tried to gain altitude. I had a fleeting thought it might be a Little Gull, but that wasn't the case.

Read more »
at June 06, 2017
Email ThisBlogThis!Share to TwitterShare to FacebookShare to Pinterest

at June 01, 2017
Email ThisBlogThis!Share to TwitterShare to FacebookShare to Pinterest

Age: All 3 birds are in high molt, with a mixture of old and new upperparts. The visible primaries on the rightmost and leftmost birds appear to be 1st generation (note the primaries on the center bird aren't visible). Thus, it's safe to say these large white-headed gulls are roughly 1 year of age.

Identification: Both individuals with bi-colored bills look like typical 1st summer Herrings - size and structure rule out smaller species such as Ring-billed, and the thick bills and heavy chests seem to rule out California Gull. The left bird - with a mostly black bill and attenuated look to the rear - is different.

Here's a slightly underexposed image of this individual: 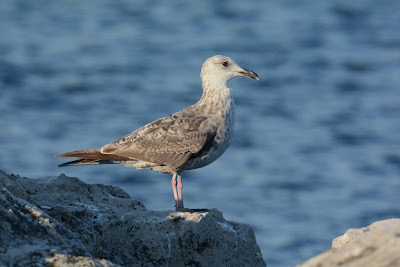 The upperparts are genuinely dark with dark centers. Note the bill is relatively long, but straight, ending with a slight droop. The striated neck markings, and dark stippled tips to the new wing coverts, recall Lesser Black-backed Gull, and that's what this month's gull was identified as.

This first summer Lesser was photographed in Sheboygan, Wisconsin. June.