at November 30, 2016
Email ThisBlogThis!Share to TwitterShare to FacebookShare to Pinterest 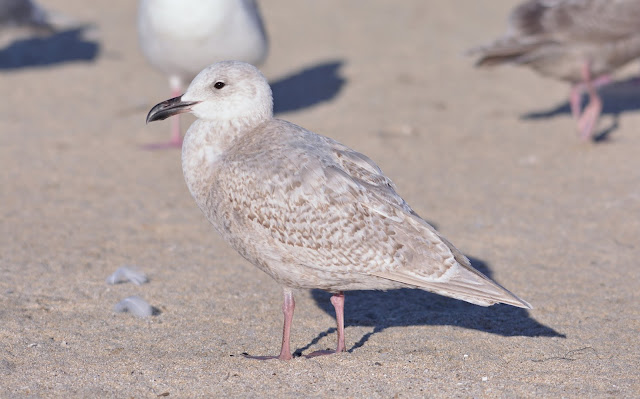 Age: Pointed primaries, patterned wing coverts and some apparent juvenile scapulars assist in aging this gull as a 1st cycle individual. Most of the lower scapulars are juvenile (=1st basic), but the faint gray upper scapulars are non-juvenile (=formative or 1st alternate).

Identification: The uniform paleness to this bird suggests a large 4-year white-winger. Our white-wingers are Glaucous, Glaucous-winged, Thayer's and Iceland Gull. The mostly black bill pattern would be inconsistent with Glaucous Gull, especially one that has already renewed some scapulars. The primaries are too pale for a Thayer's Gull. This leaves us with Glaucous-winged and Iceland Gull.

A few features should immediately jump out at the observer as pro Glaucous-winged: This is a bulgy gull with a short wing projection and a long/strong bill. Iceland Gulls tends to show more petite bills, longer wings, and proportionally larger eyes placed lower on the face.

This month's quiz bird was identified as a 1st cycle Glaucous-winged Gull. This age group regularly shows variable scapular molt early in its hatch year. The molt can be absent to extensive. The bill pattern also varies from all-dark to paling around the base. Interestingly, some hatch year Glaucous-winged Gulls show this "mismatched" whitish head against a darker body. Whether this is due to bleaching, an early molt restricted to the head/neck, or just natural variation isn't clear.

at November 30, 2016
Email ThisBlogThis!Share to TwitterShare to FacebookShare to Pinterest 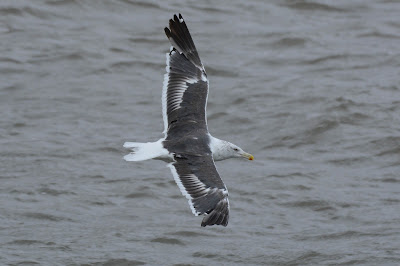 Always a late prebasic molt, p-molt is only about 1/2 way completed. The mirror on p10 is still relatively small (as it has been for years) with a squarish shape. 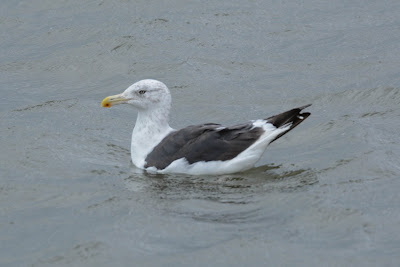 Mantle color tending toward Kelp, being a couple of shades paler than the primary tips. The head is blocky and the bill is hefty - similar to many Kelps. 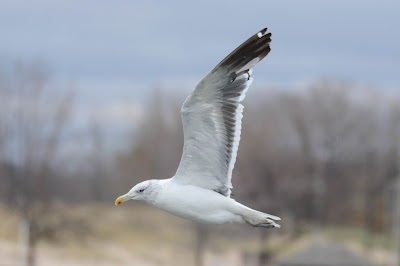 The underside to the flight feathers is dark gray (not black), and the legs are variably greenish-gray with very faint hints of pink, particularly around the webbing of the feet. 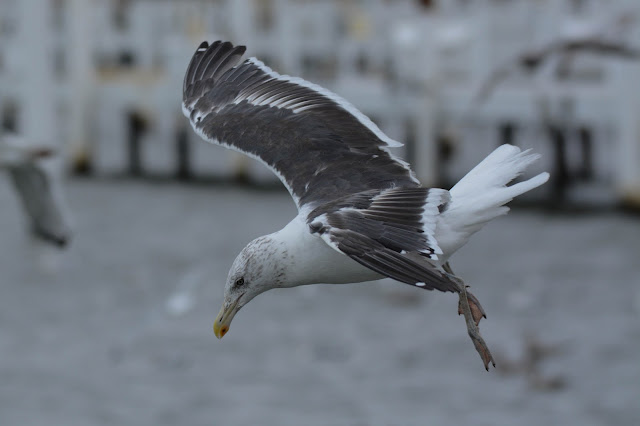 Moving on, a continuing adult California Gull also brightened up the day. It's believed this bird has been in the area since late August. 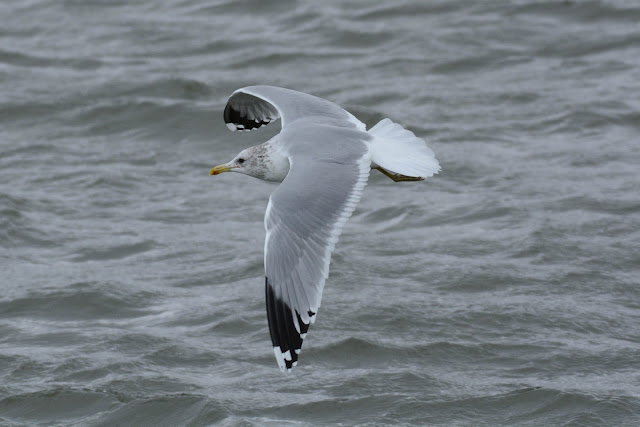 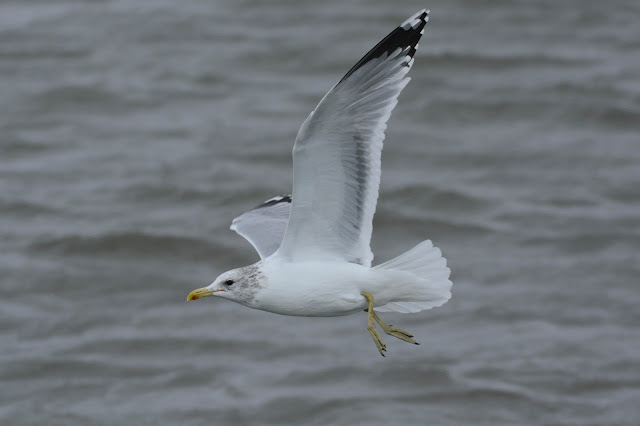 No Lake Michigan day of gulling would be complete without a "tweener". At rest on the water the bird looked like it was going to be a Thayer's Gull: 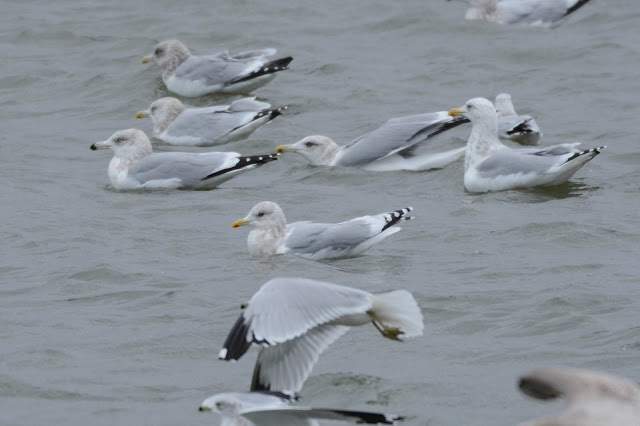 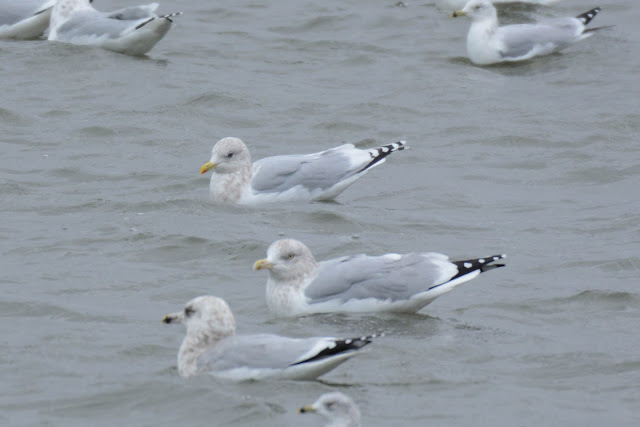 Take a look at it in flight... 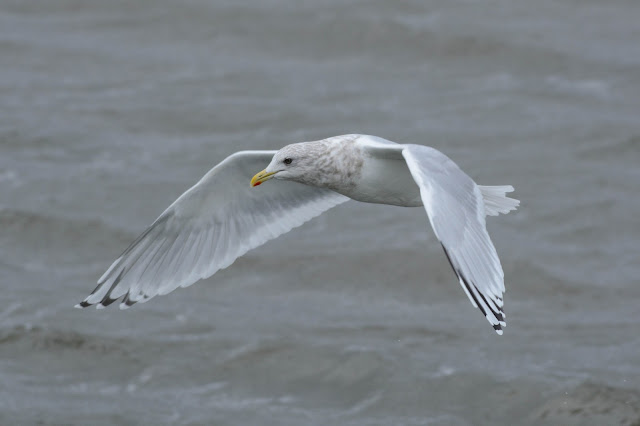 The wingtips looked paler than expected, and the markings were limited to the outer webs. 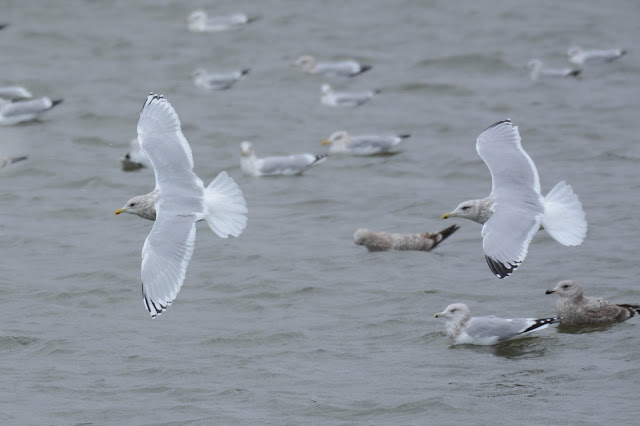 Fine, we'll call it a Kumlien's or whatever suits your fancy...
at November 24, 2016
Email ThisBlogThis!Share to TwitterShare to FacebookShare to Pinterest