Last winter, Michael Brothers and Jay Barry from the Marine Science Lab began banding Lesser Black-backed Gulls in Volusia County, Florida. The first bird to be banded was Green F:001. You may recall I photographed this individual in Daytona Beach Shores last January:


While on gull patrol at the Brevard County Landfill last week, I refound our friend, almost one year later to the day - totally unexpected, roughly 70 miles south of where it was banded the previous winter!

Now in 2nd winter garb, I was most surprised by how adult-like the iris and body feathers appear. Compared to many other similar-looking 2nd cycles, F:001 shows quite a bit of head streaking but with all-white uppertail coverts. 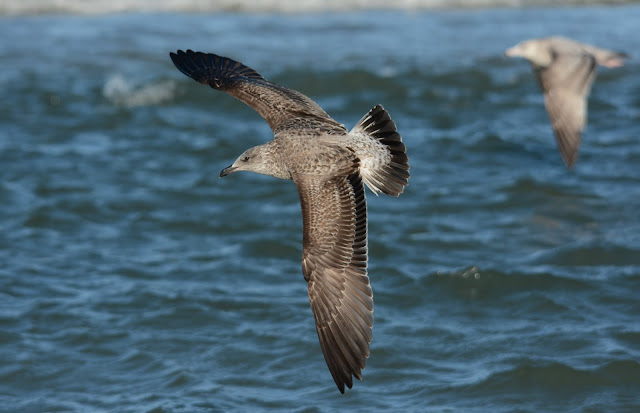 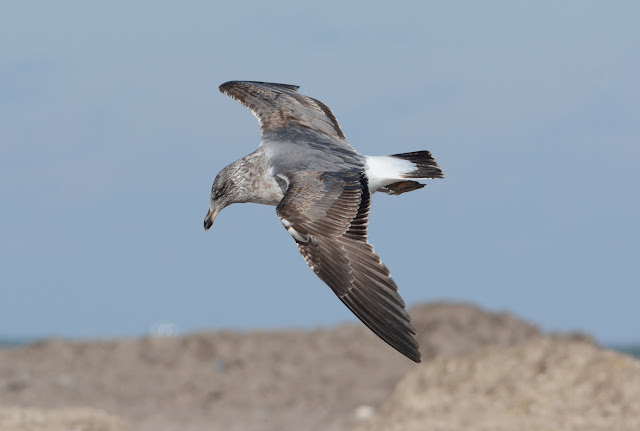 My shift on the top of the hill was well-rewarded. This sighting is a strong indicator that there is some winter site-fidelity with the Lessers found in east-central Florida. There's much more work to be done and thanks to Michael and Jay for helping "crack the code" in determining where these birds are coming from, where they reside in the breeding season and where they go in the winter.

You can see more of F:001 in 1st basic here.
at January 28, 2016 No comments:
Email ThisBlogThis!Share to TwitterShare to FacebookShare to Pinterest

Two Kumlien's and An Iceland - Huh?

The first Kumlien's was rather classic in structure, but showed a bi-colored bill and a few 2nd generation scaps.


Kumlien's #2 was a beefy son-of-a-brute with a short wing projection and disproportionately small bill.

This last bird showed uniform pale primaries, a very small build, dome-head and petite bill. Interestingly, while looking at my photos on the boat, I began to reject the idea of this being a Kumlien's. A short friendly debate ensued with those folks standing around me.  I walked over to Steve Howell to show off my best photo of this bird, to which he immediately commented, "This would never be called a Kumlien's in Europe". I could not agree more!
at January 28, 2016
Email ThisBlogThis!Share to TwitterShare to FacebookShare to Pinterest

From Maine To Florida - Herring Resights

While on gull patrol at the Brevard County Landfill in east-central Florida last week, I found 2 first cycle Herrings with field-readable bands. Both birds originate from the Gulf of Maine:

A couple of days later I found this individual with a red/maroon field-readable - a color I had never encountered:

I learned yesterday that these Hancock County Herrings are being banded by John Anderson and his team, primarily on Great Duck Island and Mt Desert Rock, roughly 150 miles to the northeast of Appledore Island in the Gulf of Maine. 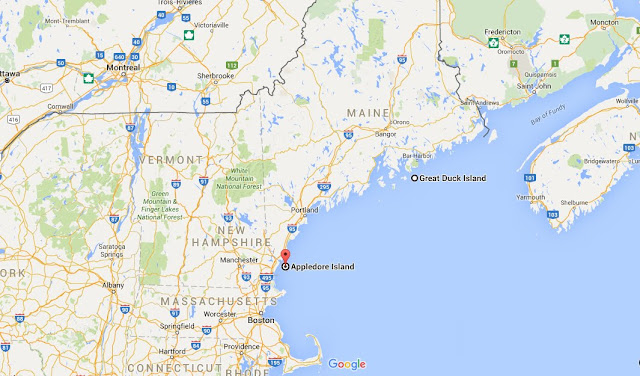 at January 27, 2016
Email ThisBlogThis!Share to TwitterShare to FacebookShare to Pinterest

Yesterday, Michael Brothers, Jim Danzenbaker, Steve Howell and I led the Gull Fly-In at Daytona Beach Shores in Volusia County, Florida. Steve suggested we split our large group up according to skill level and off we went. As I was walking south with my squad I spotted - for the second day in a row - a 1st cycle Kumlien's Iceland Gull. This was a more classic-shaped bird, but oddly, it had a rather bi-colored bill. This after me lecturing a few hours earlier at one of my talks about how 1st cycle Kumlien's keep black bills in the winter and Glaucous Gulls have pink bases to their bills. That'll teach me not to use the word "usually" as a disclaimer. 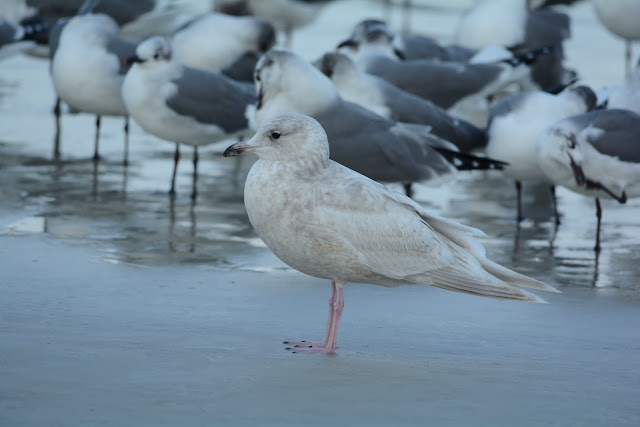 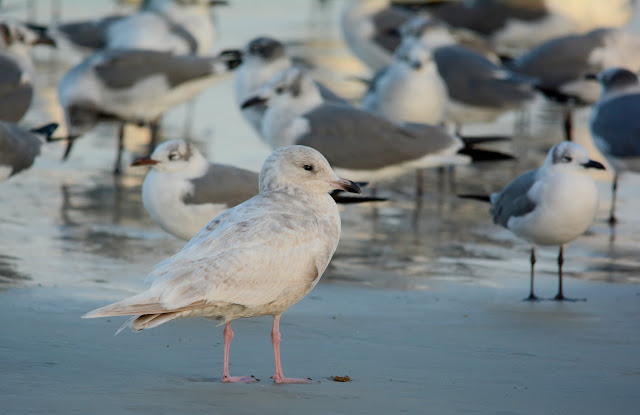 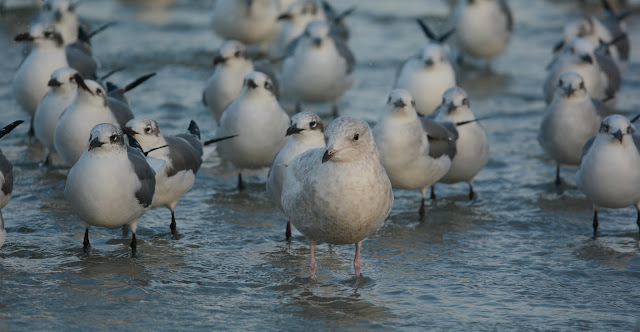 Nothing else to speak of other than a few LBBGs & GBBGs:


at January 23, 2016
Email ThisBlogThis!Share to TwitterShare to FacebookShare to Pinterest

I've been hitting a few gull hotspots in east-central Florida in between giving talks and leading trips at the Space Coast Birding Festival. Yesterday, at the Brevard County Landfill in Cocoa, Florida, I had 250+ Lesser Black-backeds. It's always fun to see the amount of variation in 1st winter birds - it reminds me of how little I know this species in its first plumage cycle (more on this later). I always get the feeling when I visit this region that we're sitting on a big mystery waiting to be revealed.

In any case, here are a couple of highlights for the day:

I was also excited to spot this 1st cycle American Herring from Appledore Island in Maine. This individual was banded on 15 July 2015 (one day before my visit to the island back in July): 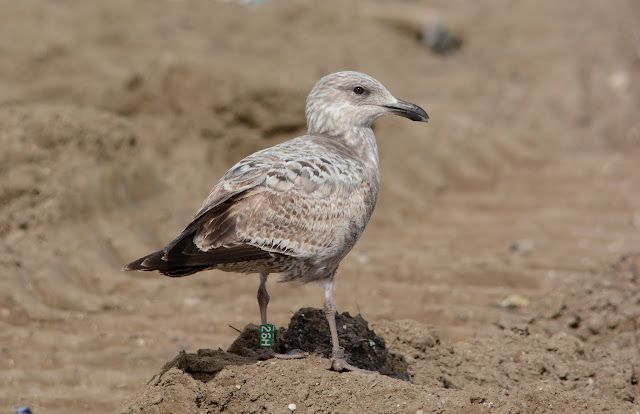 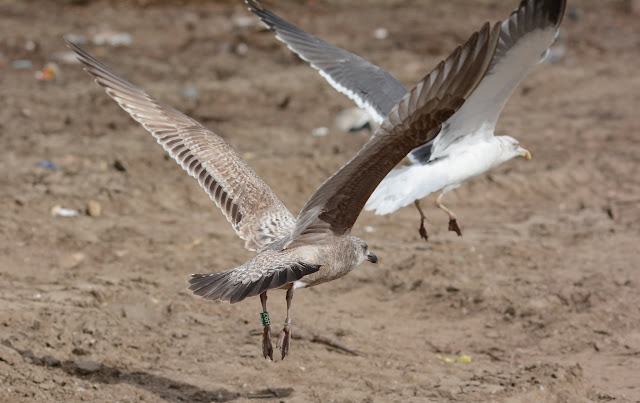 That's all for now...
at January 22, 2016
Email ThisBlogThis!Share to TwitterShare to FacebookShare to Pinterest

In other news, a Red-legged Kittiwake (adult type) was discovered along a forest road in King County, Washington on 18 November 2015. The bird was spotted and photographed by Ronald Hausinger with the USFS, roughly 50 miles southeast of Seattle, near the Snoqualmie Pass.

It was likely pushed inland by the violent El Nino storms along the northeast Pacific this season. Whether the bird was in good health or not is unknown as the finder didn't spend much time with it, not knowing the rareness of this species for this location. Typically, Red-legged Kittiwakes found the slightest bit inland don't fair well (the overwhelming majority found on land are usually dead or emaciated and ill). 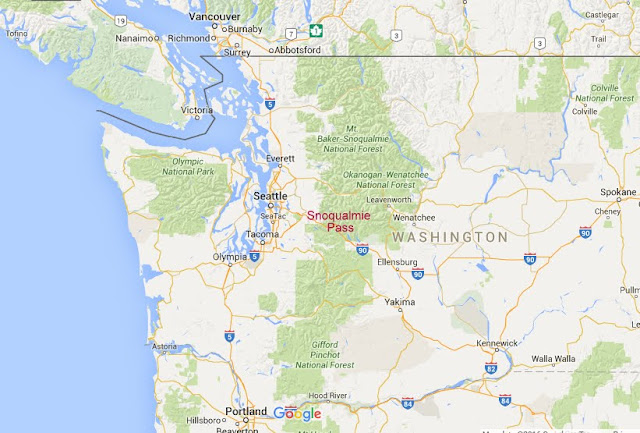 This record is now the 2nd farthest inland a Red-legged Kittiwake has been found in North America, only second to a bird found in Clark County, Nevada (03 July 1977). That bird perished the same day it was found.
at January 18, 2016
Email ThisBlogThis!Share to TwitterShare to FacebookShare to Pinterest

On Monday morning, Bill and Matt Rowe from Missouri found a Black-tailed Gull on the southwest side of Carlyle Lake in Clinton County, Illinois. This only being about 4 hours from my house - in my home state - meant the chase was on. Wes Serafin picked me up at 3:00 am yesterday, and into the blizzard we drove. It was white-knuckle driving with whiteout conditions for about 1/2 of our drive. Cars off in the ditch and at times no sight of the road, made for an uneasy start to the morning.

Fortunately, about 45 minutes before we arrived, we got word the gull was relocated above the dam by Mark Seiffert who was gracious enough to stay with the bird. After a little trial and error, Wes and I finally found the spillway and got up to the dam.

Here are the looks we started with:

The views were acceptable - about as acceptable as it is to read in a poorly lit room. You can get it done, but it's not very rewarding and most times you end up falling asleep.

After everyone present - including Andy Sigler who got his 400th Illinois species - checked the bird off, I announced I would be chumming. I walked down the hill and went to work:

It worked. The bird immediately picked up and began circling in the chum line. It came by at least a dozen times, getting really low and picking up chum. A few times, I had the bird no more than 20 feet from me. The folks above on the dam must have had killer "bird's eye" and eye-level views (as photos would later prove).

Evidently, this is now the 18th gull species for Carlyle Lake (the biggest lake in Illinois) and only the 2nd record for Illinois.

Here's a bird I've not personally seen anything similar to before: 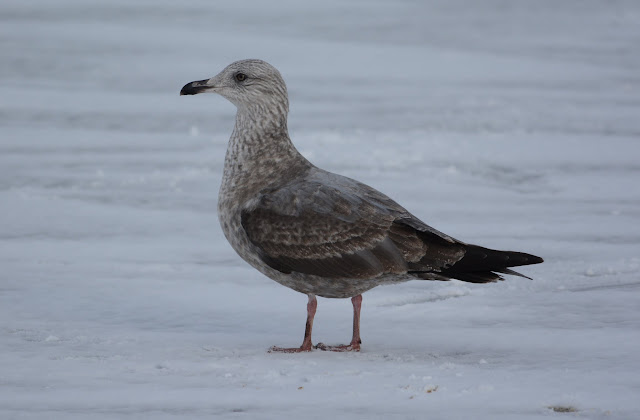 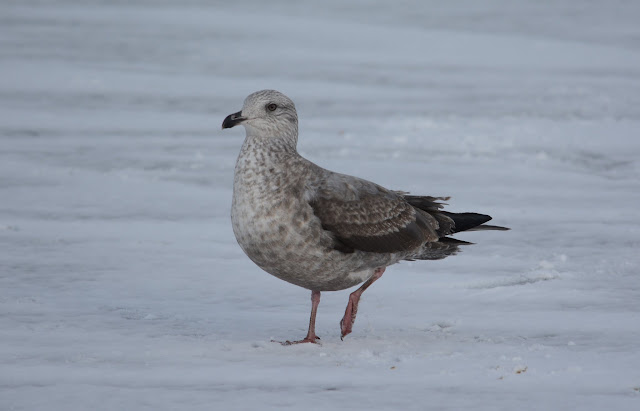 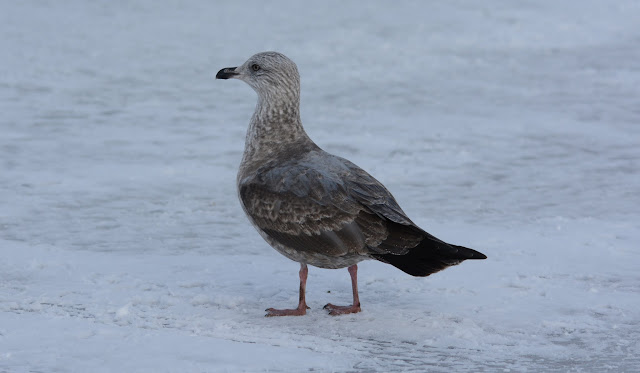 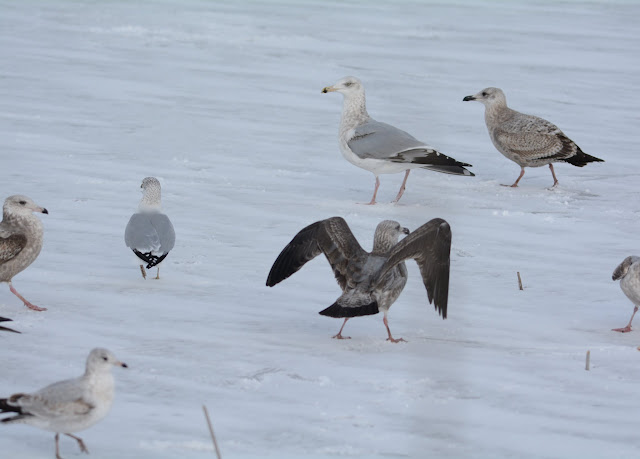 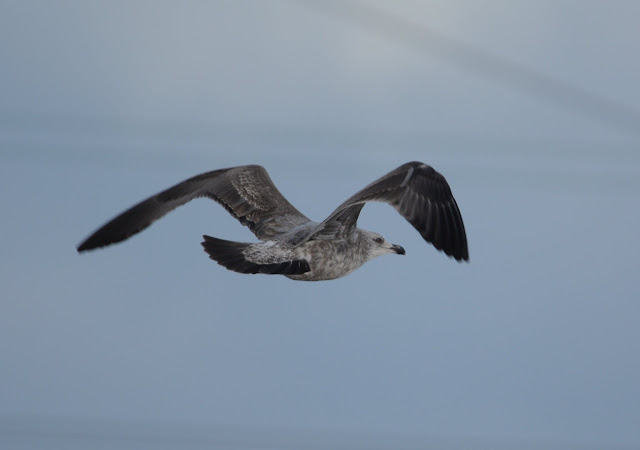 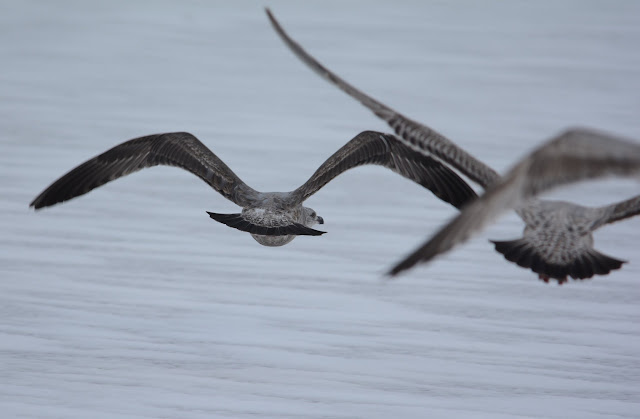 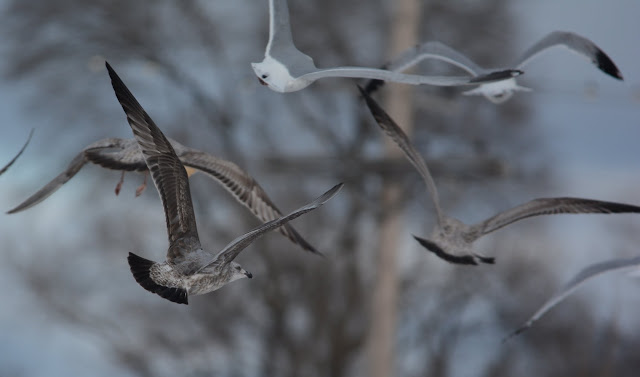 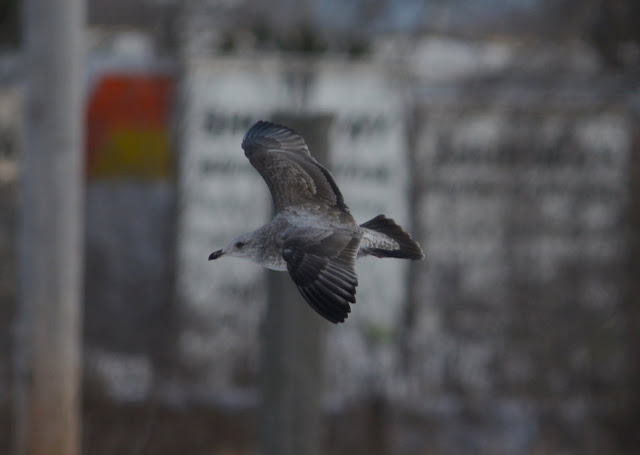 The almost solidly filled black upperwing, including the tertials, seems a bit too much for a pure American Herring. The legs are noticeably short and the wing projection longer than usual for Herring. The head streaking on the back of the head is reminiscent of LBBG. The bill - proportionately small and matching the smaller body size - is still mostly black (not very typical in 2nd winter HERGs, but also not unheard of). The gray scaps were a tad darker than I see on 2nd basic Herrings, but this very well may be due to brown tones blended in these feathers.

To cut to the chase, I do wonder if this can be a HERG x LBBG or a backcross of some sort. Where to put this one? Dark HERG?
at January 11, 2016 No comments:
Email ThisBlogThis!Share to TwitterShare to FacebookShare to Pinterest
Newer Posts Older Posts Home
Subscribe to: Posts (Atom)