A small influx of Laughing Gulls was recorded in Nova Scotia and Newfoundland in the 3rd week of October. This was in all likelihood associated with hurricane conditions along the Atlantic.
at October 31, 2018
Email ThisBlogThis!Share to TwitterShare to FacebookShare to Pinterest 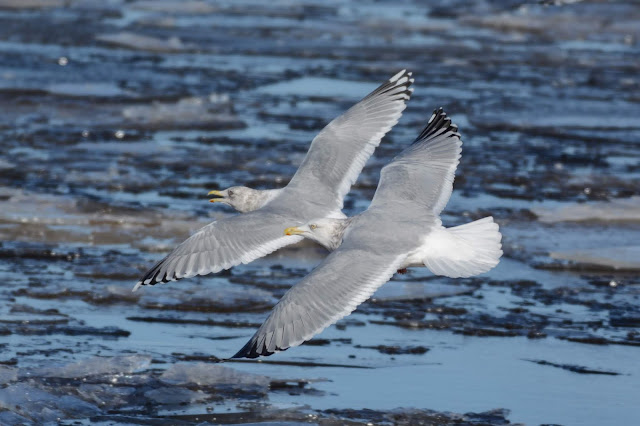 Age: Both gulls appear to be typical adults with no traces of sub-adult plumes or bill patterns.

Identification: The only thing better than an open wing shot is two open wings for comparison. The gray upperparts are virtually equal in color, and so they're of little help. Suffice to say the gray is pale and any dark-backed species is immediately excluded.

Most useful are the wingtips. To the discerning eye, the bird in front has more extensive black pigment on the wingtip while the other shows limited black and more white. Not only this, the shade of black is slightly paler on the farther individual. The bird in front shows a fairly standard Herring Gull wingtip for the central and western part of the continent, and its pale eye and fairly strong bill agree with Herring as well. The farther individual shows a rather classic Iceland Gull wingtip with thayeri pattern on the 9th primary. The all-white tip to p10 and notable white tongue tips on p6-p8 also point to Iceland Gull. Also note the dusky eye and smudgy head markings, and hints of a smaller bill.


at October 31, 2018
Email ThisBlogThis!Share to TwitterShare to FacebookShare to Pinterest

Since at least Fall of 2006, this putative Kelp x Herring hybrid (Chandeleur Gull) is back again for another winter! I spent about an hour of quality time with it early Sunday morning on the beach in Michigan City.

I must admit the photos are underexposed, and the early morning glow gives a darker sheen to the upperparts. 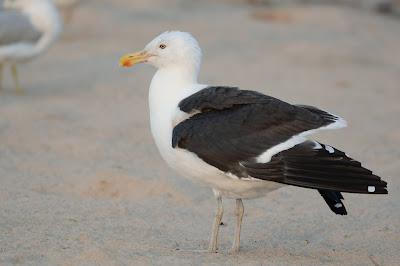 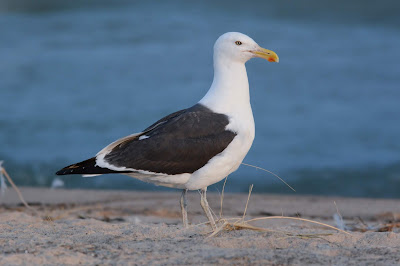 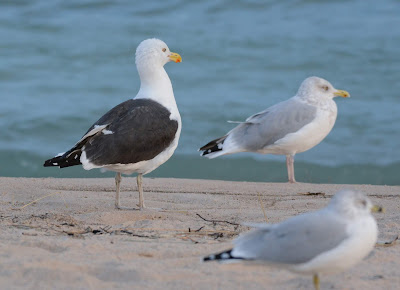 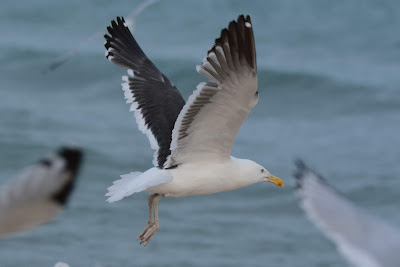 It still shows black markings on all of the visible primaries. Notice the small, squared, mirror on p10 and the relatively late primary molt for this time of year. By mid-winter, there will be fine dark streaks to the head and neck, sparsely scattered throughout. Leg color will also dullen and start to show a sickly grayish color.
at October 01, 2018
Email ThisBlogThis!Share to TwitterShare to FacebookShare to Pinterest
Newer Posts Older Posts Home
Subscribe to: Posts (Atom)