I headed back up to North Point Marina a few days after the Gull Frolic. It was nice being there on a weekday and having the gulls to myself for uniterrupted study. My numbers were similar to those I had at the frolic, but I did not relocate the white-winged 3rd cycle Kumlien's. Instead, I found a 3rd cycle bird that, again, challenged my Thayer's-vs-Kumlien's identification skills:

From certain angles, the wingtips and tailband seemed paler than the almost black 3rd cycle patterns I associate with Thayer's. The upperwing coverts seemed to be washed with a paler brown tinge (2nd generation?).
﻿﻿
California birder Steve Hampton commented on this bird and thinks there is no reason to suggest Kumlien's or an intergrade - I tend to agree the more I look at the dark primaries. He added that there are currently hundreds of Thayer's Gull in his part of California at the Davis Wastewater Treatment Plant (outside of Sacremento) that are even slightly paler than this bird. ﻿﻿

Here are two more flight shots of this Thayer's Gull: 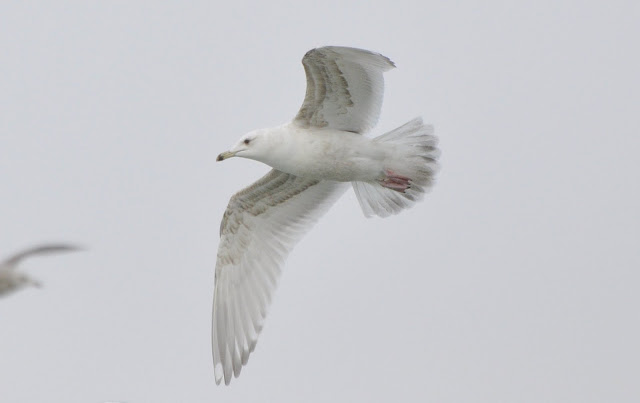 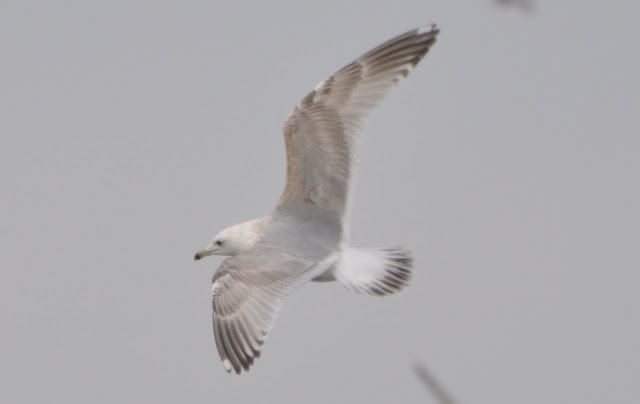 If you haven't been exposed to Thayer's and/or Kumlien's on Lake Michigan, then be cautious when identifying these two. We have, in my opinion, the highest rate of intergrades anywhere in the lower 48 states. I continue to encounter more and more individuals that I don't feel comfortable assigning to either taxon. I'm sure my inexperience is partially to blame, but even some of Illinois' greatest birders are regularly humbled by problematic Thayer's/Kumlien's intergrades that don't seem to show textbook marks.

Anywho, I was glad to get several other Thayer's and Kumlien's (at a distance) on this day. I also enjoyed this 1st cycle Glaucous Gull that spent a good amount of time coming in for chum:

at February 24, 2011
Email ThisBlogThis!Share to TwitterShare to FacebookShare to Pinterest

The Gull Frolic is an annual event hosted by the Illinois Ornithological Society (IOS) with the sponsorship of local bird clubs, organizations and generous individuals. It usually takes place on the 3rd Saturday of February at the premier Illinois gull-watching hotspot "North Point Marina". The event is housed inside the Winthrop Harbor Yacht Club. Here birders are afforded much more than watching gulls from the outdoor boardwalk; inside, one can sit in on an informative gull lecture, examine various gull specimens, and best of all, warm up and catch up with friends. Oh, did I mention the food? No one goes hungry at the frolic.

This year's "10th annual" Gull Frolic was another success with guest speaker Alvaro Jaramillo educating and entertaining the crowd. In fact, the event has drawn so many people in the last several years that it's now "pre-registration only" and is limited to 200 individuals due to building capacity.

From this year's birds, this nearly all-white winged 3rd cycle Kumlien's raised a lot of eyebrows: 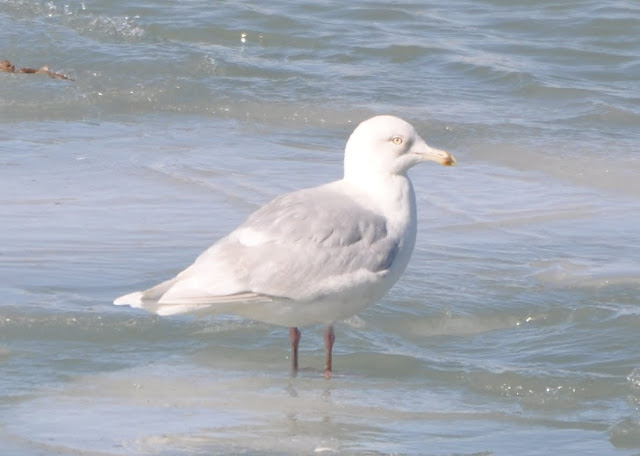 There is always the hope that a nominate L.g glaucoides will present itself, but as far as I know, no such record has been substantiated on Lake Michigan.

Here are some other gulls that I was able to photograph: 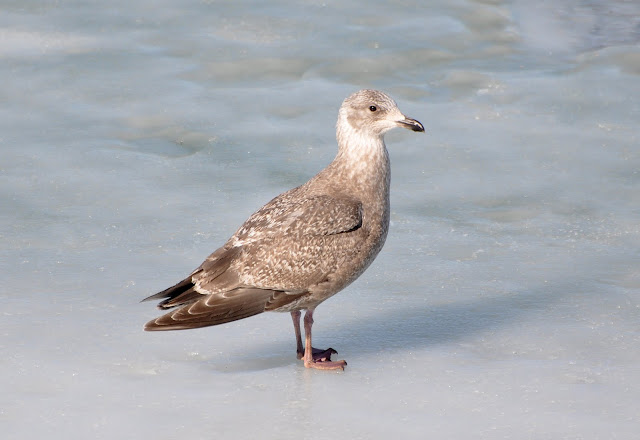 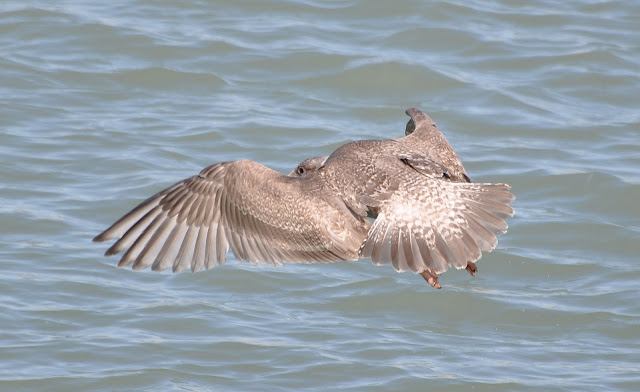 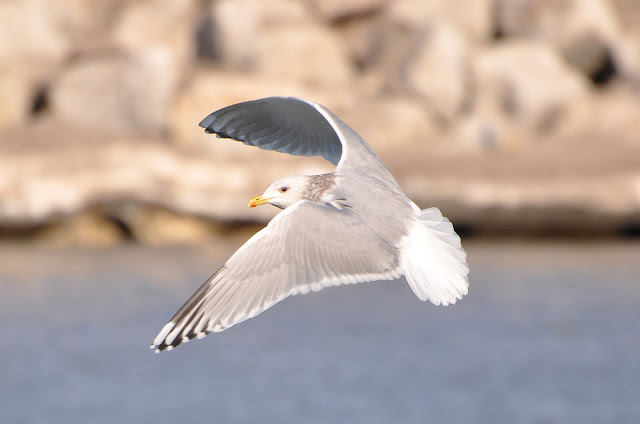 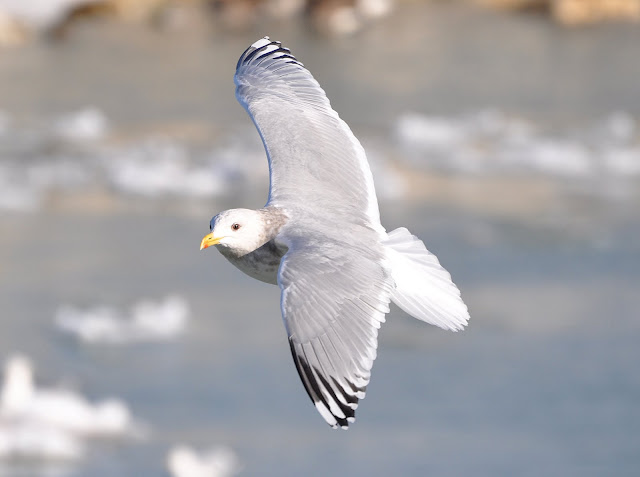 This next adult bird is a bit problematic for me. For now, my tentative ID is a Thayer's/Kumlien's intergrade: 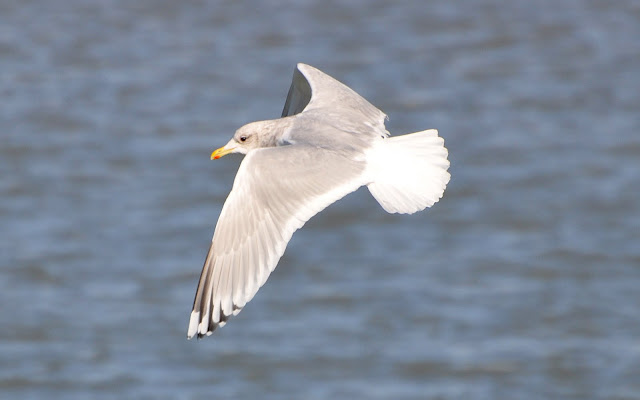 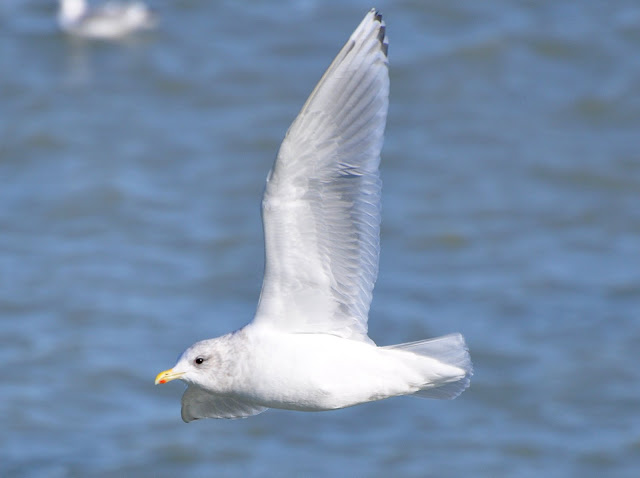 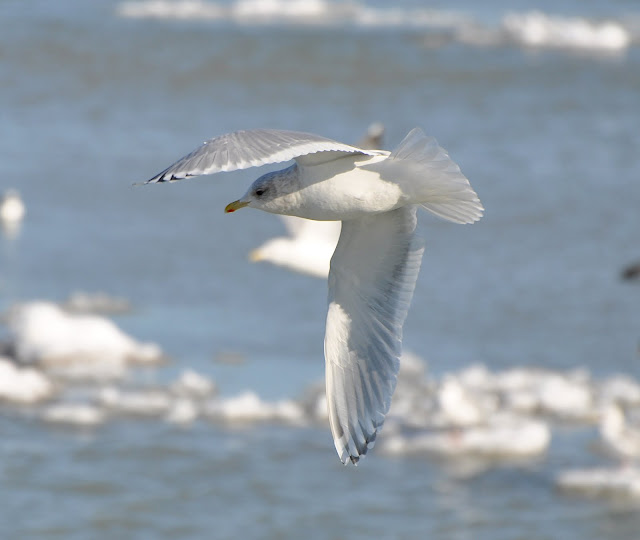 The wingtips looked too pale for a Thayer's Gull next to this American Herring Gull. Also note paler mantle shade and the larger apical spots. One could easily argue the bill and head size/shape fits well for Kumlien's or a fm Thayer's: 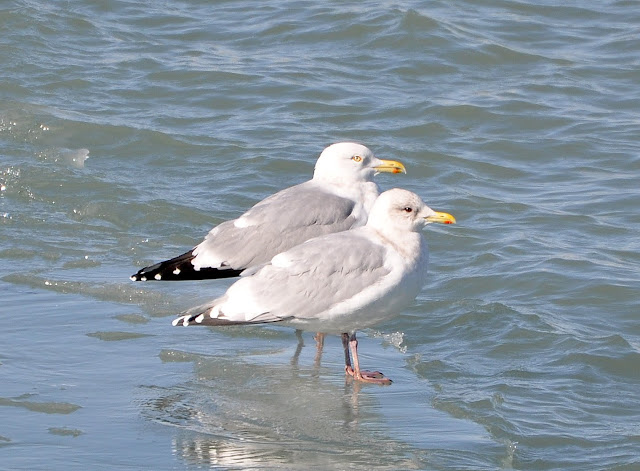 There were 3 Glaucous Gulls seen (1 adult, 2nd cycle, 1st cycle), but surprisingly, we missed LBBG and GBBG completely! The next morning, Eric Walters found 4 adult GBBGs that came in together - go figure! I'm looking forward to next year - see you then!
at February 21, 2011
Email ThisBlogThis!Share to TwitterShare to FacebookShare to Pinterest

The Illinois/Indiana stateline has been seeing an increasing number of Great Black-backed Gulls in the last several years. I had a high count of 37 individuals between Calumet Park, Hammond Marina and the Whiting BP Refinery on 13 Feb, 2011. A weather related note that I will keep in mind next winter is the amount of ice on the lake. Just one week prior, most of the lake was frozen with only about 12 individuals found between all 3 locations. Numbers rocketed once the "heat wave" swept through (including one day of 58 degree temps). I wonder if these birds went unnoticed way out on the ice over the lake, or if they were birds that moved in from the south. More interesting, on 20 Feb, 2011 there was virtually no GBBGs left at Calumet Park, Hammond Marina and Whiting. In fact, it seemed that these birds were moving in between the rainstorm. I observed 2 adults at Whiting (during the rain) that disappeared just a few hours later (no rain). Coincidentally, Eric Walters had a high count of 4 adults at North Point Marina the same morning. He observed these birds come in one after the other in under a minute; ironically, we had "zero" the day before at the IOS Gull Frolic. Keep in mind that Great Black-backed Gull is still a good find along the lakefront in Lake County. No one seems to know why they favor the Illinois/Indiana stateline but it goes without saying that it must be food-related. This is also true of Glaucous Gulls, but not as noticable as with GBBG.

The majority of these GBBGs are adults and 1st cycles (as is often the case with gulls). They're usually seen associating with Glaucous Gulls and both species are quite skittish. They seldomly come in for chum even when the more common gulls stir a huge commotion (although there's always at least one young bird that takes the bait).

This particular individual caught my attention as I watched it fly in from a distance:

My initial impression was first cycle because of the almost all dark bill and the neatly patterned upperwing coverts, but then important field marks of an older bird presented themselves. For one, 1st cycles will usually have darker secondaries and darker heads. This individual has an increasing amount of white on the secondaries and a clean white head. The upper scapulars seem to have a good amount of gray coming in, showing a "smudgy" look that contradicts 1st cycle feathers. The ﻿inner and outer primaries have a strong contrast mainly because of the pale second generation inner primaries. This is exaggerated by the darker black outer primaries which are a result of the 2nd prebasic molt. 1st cycles have a much more concolorous look to the primaries like on this individual:
Note the fine streaking on the head and the "neater" look of the upperparts. The literature mentions that tail patterns and uppertail coverts are variable in these two ages. I agree wholeheartedly. I've found tail patterns to be of little use as some 2nd cycles could have heavier tailbands than 1st cycles and vice versa.

Did you notice the mirror on P10 in the 2nd cycle GBBG? This dispels any suspicion of a Great Black-backed Gull in its first plumage cycle. Although it should be noted that not all 2nd cycles show a mirror on P10.  Here's that same bird again:

at February 19, 2011
Email ThisBlogThis!Share to TwitterShare to FacebookShare to Pinterest

The Black-legged Kittiwake is the most abundant gull species on the planet with an estimated 6 million pairs as of 2004 (Olsen). It has a fragmented breeding range that extends almost entirely over the Arctic Cirlce and other regions of the upper northern hemisphere. It nests in copious colonies, primarily on steep cliffs that overlook the ocean. This species is truly pelagic, evidenced by the months it spends out at sea after the breeding season. It's commonly seen on pelagic trips off the west coast and small groups can also be seen from shore when strong winds force them east, sometimes grounding them on beaches in California.

In the interior, the Black-legged Kittiwake is known for mobilizing birders, including myself, as this species is rare to casual away from the west coast. This season has been an unprecedented one, producing several record-breaking sightings for South Dakota and Indiana.

Ricky Olson and Kenny Miller reported 7 BLKIs (6 juveniles and 1 adult) on 21 November 2010 out of Pierre, South Dakota. This area gets no more than 2 BLKIs per year and some years none are reported at all.

Most Black-legged Kittiwakes seen in the United States are 1st winter birds since experienced adults take to the open oceans to feed. This adult (or near-adult) is an exceptional find that reinforces what an extraordinary year it has been for this species:

In late fall, BLKIs are regularly seen during lakewatches at the famous Miller Beach in Indiana. The lower Lake Michigan birds usually come in with stiff northwest winds and no more than 1-2 are expected on a "good" day of lakewatching. On 18 November, Ken Brock and company reported 26 individuals (all juveniles) in Gary, Indiana - I've yet to find an inland record greater than this!

In Illinois, BLKI is usually unrecorded in spring and rare but regular in late fall to early winter - it's a very rare winter resident. It's not uncommon for this species to go unnoticed on the Chicago lakefront in some years. The last several months have been superb with at least 6 sightings along the Illinois lakefront from November-February and more than twice that on Indiana's lakefront. I had a personal high count of at least 3 juveniles on 18 November looking into Indiana waters from Calumet Park. Currently, there is a wintering 1st cycle bird being seen on-and-off at Montrose Beach and another at Calumet Park. It's very likely that more than two kittiwakes are roaming the Chicago lakefront and it's also very likely that these individuals are a product of the November flock seen at Miller Beach in Indiana.

This description given by Chicago birder Bob Hughes wonderfully describes one of the reasons why this species is truly a majestic marvel: "It's pretty amazing how far these Lake Michigan Black-legged Kittiwakes have come and the journey they took to get here. They were probably born far above the arctic circle in northern Canada, possibly alongside nesting Northern Fulmars and Thick-billed Murres. When they were ready they left their nests and flew south, probably down Hudson Bay, where they may have flown over a pod of Beluga Whales or were harassed by Parasitic Jaegers. Maybe they saw a Polar Bear or two. At some point they had to fly over land which means crossing the expanse of the boreal forest in Ontario or Manitoba. Once they reached the Great Lakes it was a hop, skip, and a jump to Chicago".

﻿If you've never seen a Black-legged Kittiwake, then get out and find yours. This is certainly the year to score one - or two!
at February 06, 2011
Email ThisBlogThis!Share to TwitterShare to FacebookShare to Pinterest
Newer Posts Older Posts Home
Subscribe to: Posts (Atom)