One often hears folks boasting about their twenty-some species of warblers seen in one day. Not many birders brag about their daily high-counts of gull species, and this is probably because only 7-8 species is considered well above average for most regions. After doing a little research, I found that "14 species of gulls" is the one-day North American record (and likely the world record).

I recently stumbled upon a contender that ties this record. Dave Brown out of the St. John's area in Newfoundland has mentioned to me that he's seen 14 species in one day on more than one occasion. Here is his most recent list from 1 DEC 2010: Great Black-backed Gull, Lesser Black-backed Gull, Kumlien's Iceland Gull, Thayer's Gull, Glaucous Gull, Herring Gull, Ring-billed Gull, Common Gull, Black-headed Gull, Slaty-backed Gull, Yellow-legged Gull, Black-tailed Gull, Bonaparte's Gull, and Black-legged Kittiwake. The birds were all observed in St. John's.

There have also been rumors of a 14-gull day in South Dakota, outside of the Pierre area. I've not been able to confirm this record.
at April 22, 2011
Email ThisBlogThis!Share to TwitterShare to FacebookShare to Pinterest

Death of a Kittiwake

A basic adult Ross's Gull was found and photographed at Montrose Beach in Chicago on 27 March 2011. The local birding community wasn't informed until 30 March and so I got out the next morning and searched multiple sites along the southern lakefront. I assumed others would be at Montrose early in the morning and so I began at Calumet Park. After a long northward trek,I finally made it to Montrose around 3:00 p.m. where I found the week-long Black-legged Kittiwake loafing in the harbor. At the moment, the BLKI didn't mean much to me since I was looking for a "better" bird. I made my way to the beach and waited for a miracle. I found Kanae Hirabayashi who asked me if I "had seen it". Kanae was under the impression that the Ross's was seen the day before. When I explained to her that the Ross's was seen four days prior, her facial expression went from hopeful to hopeless. We chatted for a few minutes and she then departed. I must have looked like a real fool to her as I hung around the fishing pier wishing for a Ross's Gull to show up. To see photos of this bird check out this thread on the Illinois Birders' Forum (IBF): http://www.ilbirds.com/index.php?topic=47529.15

Pete Moxon and Eric Secker showed up a bit later as I scanned the lake from the side of the fishing pier. They asked me if I had seen the BLKI in which I replied, "about an hour ago in the harbor". They pointed me to it as it stood close by on the wall at the base of the pier. I walked over and began to photograph this pelagic seagull from less than 10 feet away. I was glad to see it outside of the harbor but in the back of my mind, I wondered why it was allowing such close approach. It gave great looks before getting up and flying along the south side of the fishing pier where it made half-hearted attempts at picking food from the surface of the water. Shortly after it alighted onto the pier again and we all watched it for a few more minutes. Pete and Eric carried on (I later found out that the two were trying for a March Big Day record) and I, again, was left alone with a feeling of deprivation.

I stood on the pier and rubbed my strained eyes that were begging for a break after an entire day of looking through my scope. Suddenly, the Black-legged Kittiwake flew right before me and abruptly stopped, hovering over the lake similar to how sterna terns do before they dive for their prey. The kittiwake dove, but again, half-heartedly. It tried a few more times and finally came up with a tiny fish about the size of a french-fry. It downed the fish in flight and then sat back down on the pier.

I watched as passerbys walked within feet of the gull and so I too approached it. It stood still without flushing. I began to speculate whether it may be sick or injured. I couldn't help but recall the last pelagic species at Montrose that spent a "prolonged" amount of time "resting" and allowing "great" looks. After waiting for about 5 minutes, I made a decision to intentionally flush it. I waved my arm and jerked forward with a fast motion. It got up and lazily flew a short distance onto the beach in the protected area. I remembered an article that I had recently read in which there was mention about the commonly observed tame behaviors of juvenile Black-legged Kittiwakes during the first year of life. I watched it for some time from a distance and didn't think much of it - after all, it had been here for a week now. I spent some more time around the pier enjoying good looks at a few White-winged Scoters and wishing a Ross's Gull would fall from the sky. I later crossed paths with the Black-legged Kittiwake again on the beach. I shot this video to demonstrate just how tame it was:

Shortly after, birder Larry Krutulis showed up. He approached with caution in fear of flushing the gull. I told him there was nothing to worry about and that it wasn't going anywhere. We stood there for about 30 minutes debating whether or not what we were experiencing was abnormal. The bird's tameness became disturbing. Outwardly, we didn't note any physical injuries and so we figured it was ill. I made a few phone calls and so did Larry. Larry and I questioned each other for a few more minutes and I told him that about an hour ago I felt 80/20, but now 50/50. Coincidentally, Larry happened to be a volunteer with Chicago Bird Collision Monitors. I flushed the bird one more time so that Larry can get a look at it in flight. Now, the bird was having trouble taking off; it's wingbeats were stiff and lazy, and when it landed, we noticed a loss of balance that fledglings show when learning how to land. I was now 100% sure that this bird was deteriorating and that it needed help. Larry made one last phone call and felt that it was best that he rescue the bird.

We walked up to the pier and slowly retrieved the bird. Here's a video of the rescue:

I drove Larry to his residence as he cradled the veiled kittiwake in his lap on my front passenger seat. It released a soft whimper every now and then and something about that sound has left a different impression with me regarding wild gulls. The Black-legged Kittiwake was picked up that evening from Larry's home by another volunteer from the Willowbrook Wildlife Rehab Center. I didn't really have high hopes for the kittiwake, but I was told that if it did recover, then it would be released back at Montrose. I checked back with Larry the next morning and he responded with the worse news one would want to hear: it didn't make it through the night. 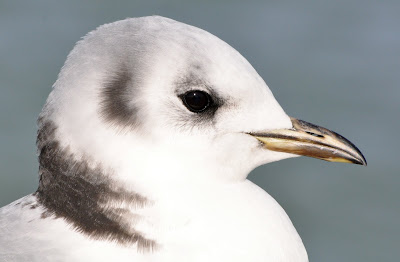 During this past week, I've thought carefully about how the evening unfolded. I can't say there's much I would have done differently, although I've come to the realization that even though the Ross's Gull is a much rarer bird, the kittiwake was equally deserving. Perhaps there is no such thing as a "better" bird? Maybe.
at April 08, 2011
Email ThisBlogThis!Share to TwitterShare to FacebookShare to Pinterest
Newer Posts Older Posts Home
Subscribe to: Posts (Atom)