New York is currently hosting a Gray-hooded Gull (Chroicocephalus cirrocephalus) on Coney Island in Brooklyn. The original finders, Sara Burch and Jacob McCartney, first reported what they guessed was probably a Black-headed Gull via eBird on 24 July 2011. They found the bird with a group of Laughing Gulls that commonly congregate on the beach near Nathan's Famous; what they knew for certain is that this bird wasn't a Laughing Gull. It was different. The eBird report gained the interest of New York birder Doug Gochfeld who eventually received a photo and felt it was a Gray-hooded. Doug informed the birding community and it was refound and confirmed 5 days after the initial sighting at the same location. In defense of the original finders, who have only been birding for about a year, Gray-hooded Gull is not found in any North American field guides.


Having never seen this southern-hemisphere larid before, I promptly made arrangements to get to the East Coast! I thought I'd play it safe and wait until next weekend to drive out for this rarity - but this rarity is not your typical every-couple-of-years rarity. The only record of Gray-hooded Gull in the United States is from Franklin County, FL on 26 December 1998 - that bird was a one-day wonder, but well documented. Even if the NY bird was to stick around until next weekend, my wife began to rightfully remind me of several x-y-z commitments that would be difficult to forgo in the next few days. That was her way of saying there was no way it was going to happen next weekend whether the bird stuck around or not. "Why don't you go this weekend?", she suggested in a casual tone. Well, that was a grand idea but it was Saturday and close to midnight - it would be nearly impossible to drive to New York and back by Monday morning. I was forced to book the next flight out of Chicago. I was airborne 6 hours later, and by 10:00 a.m. the next morning I was soaking in the 'fish-eye' stare of this adult Gray-hooded Gull:
<>
Gray-hooded Gull, or Grey-headed Gull as it is known on the other side of the Atlantic, consists of two subspecies: C.c. cirrocephalus and C.c. poiocephalus. Loosely speaking, the larger nominate race, cirrocephalus, is found locally along both coasts of South America and poiocephalus is found locally along the coasts of Africa. This species has a fragmented breeding range throughout both continents. Breeding habitat is variable, ranging from subtropical coasts to inland lakes and rivers. Olsen and Larsson estimated the world population to be roughly 50,000 pairs as of 2003; the South American populations were estimated to be around 10,000 pairs.


Fortunately, adults are rather distinctive in basic and alternate plumage and so this bird's identity is unquestionable. Besides its grayish hood, reddish legs, clear iris and red orbital, GHGU has a distinctive primary pattern that might superficially resemble Bonaparte's or Black-headed Gull at first glance. Unlike these two, the white leading wedge on the upperwing gives way to a prominent black wingtip with two large mirrors on the outermost primaries (P9 and P10). 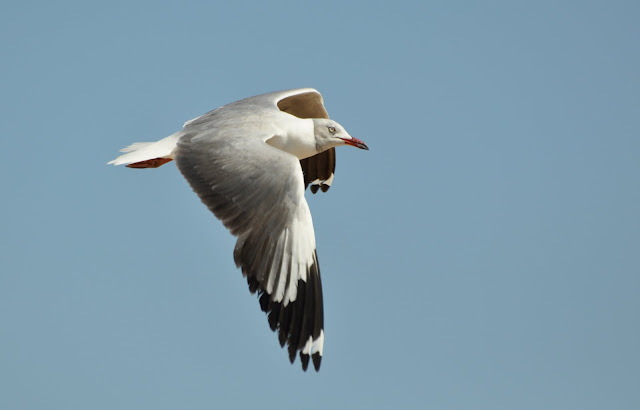 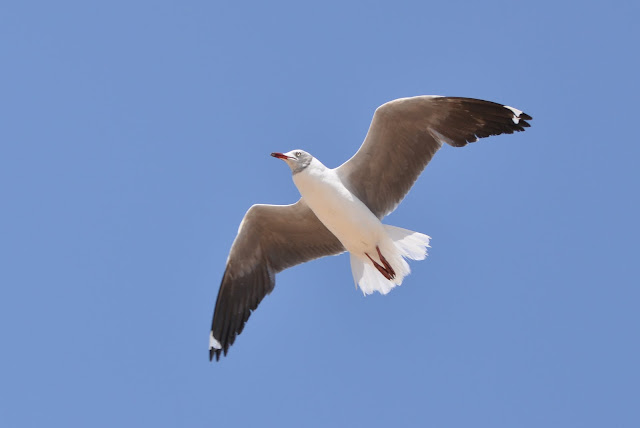 Body size is very close to Laughing Gull's although this species stands with a notable upright posture. The mirror-band is also noticeable when the wings are closed. 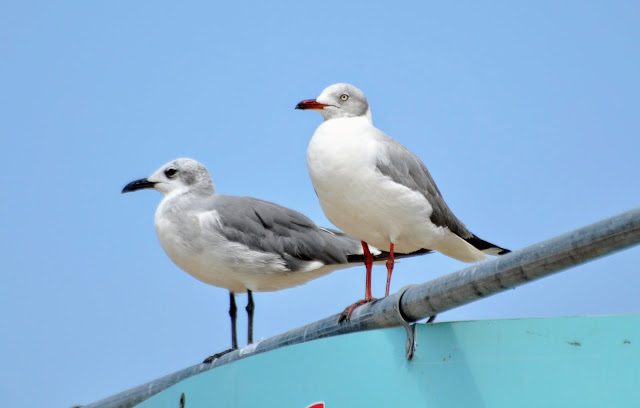 First cycle GHGU are considerably more challenging to identify but should be compared to Black-headed Gull in the northern hemisphere and Brown-hooded Gull in South America.


Naturally, the concern regarding this bird's origins has been raised as it should be. From my limited knowledge, there was nothing that suggested this bird is not wild after having watched it feed, drink, fly, rest, preen and interact with the local Laughing Gulls. Here are a few of my observations and photos that will be submitted to the NYSARC. The Coney Island Gray-hooded Gull is a definitive adult that has begun the prebasic molt with P1 missing on both wings (perhaps even P2 on the left wing). This molt is within an appropriate window for certain populations from South America, specifically Peru but not Argentina, as well as some from Africa, specifically West Africa but not equatorial populations in the east or South Africa (Olsen and Larsson, 2003). 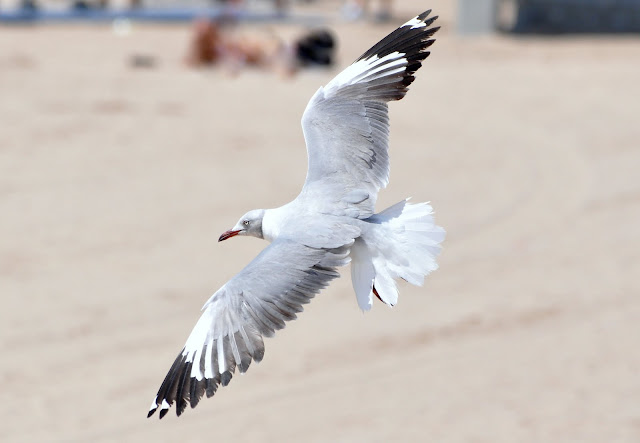 The timing of the prebasic molt is highly variable in this species due to its disjunct range. Different populations undergo different molt stages at various times of the year, but these "molt windows" should not be applied rigidly with vagrant gulls as they are known to sometimes contradict the ordinary when found out of their regular ranges. Speculation regarding the Gray-hooded's land-of-origin based strictly on molt stage could be doubtful and difficult to narrow down. I propose that behavior, habitat and morphological features be of greater importance when discussing the provanence of this bird. I will add that the fraying of some of the flight-feather tips show typical signs of wear and not those of a bird that has been in captivity.

A few plumage features that may be useful include the size of the mirrors on the outermost primaries and also the coloration of the upperparts. The nominate race is said to have paler upperparts and larger mirrors than the African subspecies. I'll leave it to the records committee to do their homework here. It will take much comparing of photographs and input from observers that have experience with each taxon to try to make a case for either continent.

Behaviorally, its interactions did not in any way strike me as unusual or unhabitual for a gull. It did not appear ill or unalert. When not coming in for chum, its flush-point was anywhere from 30-40 feet whereas the local Laughings flushed at about 5-15 feet. It was much more approachable when it took to a higher perch. 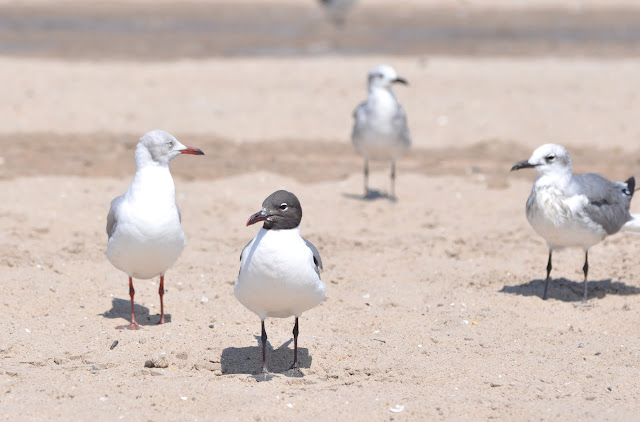 When coming in for chum (4 times in the course of 6 hours) it was usually one of the first gulls to arrive and first to depart. It allowed observers close looks but was not tame. The GHGU would get its mouthful and immediately disperse to a nearby post where it fed and rested; most of the Laughing Gulls typically stayed on the beach and waited for more chum. I found the GHGU to be more skillful than the local Laughing Gulls. Birders who were present the day before also shared this observation and felt it was more aggressive as well - this bird had the one-up on the Laughing Gulls. If it desired a post, it easily displaced the Laughing Gull that was already perched on it - adults and nonadults alike!


By late afternoon the beach and boardwalk were overcrowded with thousands of people (this was expected as it was a warm Sunday afternoon). Shortly after high noon, the Gray-hooded Gull preferred to stay on the roof of the bath-house on 15th Street in line with Nathan's Famous. Here, it only came down sporadically, mainly to capitalize on the finds of the Laughing Gulls when they would begin clamoring and tussling over handouts. When it did fly down to see what all the fussing was about, it rarely landed for more than a few seconds. It seemed much more at ease in the morning when less human traffic existed. 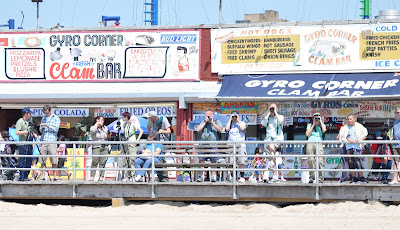 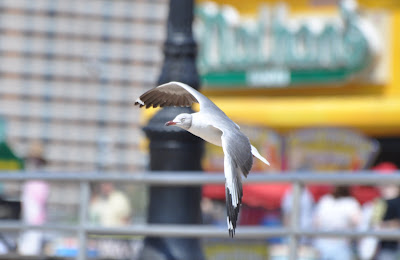 I've been asked by several friends where I think this bird originated from. One scenario that I've imagined is the possibility of it having drifted north from South America this past spring. This is pure speculation and not to be regarded as factual, but could it have moved northward about the time wintering Laughing Gulls departed north for their spring migration? This individual may have easily been undetected for months as it associated with large flocks of Laughing Gulls. Although it has distinctive features that separate it from Laughing Gull, it is not easy to pick out at a distance when surrounded by other gulls, especially when one isn't expecting a rarity. New York birders admit that Coney Island is very underbirded. I'm told that it is birded even less in the spring and summer due to heavy traffic and beachgoers. Also, many birders on the East Coast don't give Laughing Gull flocks a second look due to a lack of interest and the sheer fact that this is a very common species. I'm not at all surprised that it was found by fledgling birders who stopped to count a flock of "just" Laughing Gulls for their eBird lists. Kudos to Sara and Jacob - you two hit the jackpot! The fact that the New York Gray-hooded Gull was found 5 days (that's a long time) after the initial sighting - only after an alert was sent out - is somewhat telling.

The concern over whether it was ship-assisted should be a nonissue to any records committee as such birds are countable. Keep in mind that these ships are part of the ecology of seabirds. They're more or less moving islands that are used to feed around and also to rest on.

It should be mentioned that the two authoritative gull guides of our era, Gulls of the Americas and Gulls of North America, Europe and Asia, make no references to this species' northerly expansion along the northern coasts of Brazil where it is found wintering side-by-side with Laughing Gulls in the state of Ceara (pers. observations of Joe DiCostanzo. See Harrison, 1983; Perlo, 2009). A large sum of Gray-hooded Gulls in South America winter north of their breeding range (slightly more north than figure 1 indicates); It's quite incredible that this bird has selected to associate with Laughing Gulls this far north along the Atlantic and this should be considered when debating its provenance.

I'm hopeful that the records committee in New York will endorse this individual but would still respect their decision either way. My personal impression was that of a wild gull that was accustomed to the daily routine on the boardwalk - it was opportunistic, alert and untame. Its displays, behavior and interactions with the Laughing Gulls suggest it was socially fit and not a bird that has been in captivity. Gray-hooded Gulls are not specifically prone to vagrancy, but gulls as a whole generally are. Last winter, a young birder from Illinois asked what the "Craziest ABA Gull" record was and Gray-hooded came up. I commented that Gray-hooded exists on two different continents with a wide breeding range. I mentioned how it straying into North America was not as surprising to me, say, as a Swallow-tailed Gull. I stand by this opinion even more now that I've seen one in Brooklyn. Other noteworthy records that have been accepted north of this species' range (besides the 1998 Florida bird) include a September adult from Panama, a recent Barbados record from May, 3 spring-summer records from Eliat, Israel and one June record from Marismas del Guadalquivir, Spain. If accepted, this would be the northernmost Gray-hooded Gull record on the planet!
at August 01, 2011
Email ThisBlogThis!Share to TwitterShare to FacebookShare to Pinterest
Newer Posts Older Posts Home
Subscribe to: Posts (Atom)