Every fall, tens of juvenile Sabine's Gulls are found on large lakes and rivers throughout the United States as they make their transequatorial journey to the southern hemisphere. Mid-September through mid-October is peak time to find a Sabine's in the interior and Illinois is no different. Illinois and Missouri birders know that their best chances to see this sternine gull is to attend an "inland pelagic" field trip to Lake Carlyle in Clinton County Illinois (to read about last year's trip, click here).

Still, finding a SAGU at Carlyle could be tricky. For instance, earlier this month on 14 September 2011, Dan Kassebaum had a record high of 9 SAGUs while conducting an evening lakewatch. Three days later, a St. Louis Audubon contingent found zero, but then several were found just a few hours after SLA birders departed the lake. On Friday, 23 September 2011, three Sabine's were present, including an adult which is very exceptional! The next morning, birders attending the IOS annual pelagic could only turn up one (found by yours truly). Numbers seemed to fluctuate all week and it gave me the impression of a very touch-and-go presence. I'm sure that with a little data recording of weather systems and weather conditions one could narrow down the reason(s) for these radical turnovers. Is it the size of the lake that makes these birds go unnoticed? Do they spend their days feeding at other nearby locations and then return for an evening feeding frenzy? Or, are they truly migrating out and being replaced by new arrivals?

Unlike last year's Sabine's, this year's bird was first found sitting on the water. This is obviously a bigger challenge than finding one in flight. In flight, Sabine's has such a bold and unique pattern to its upperparts that it's really difficult to mistake:


Birds sitting on the water, which again are usually juveniles with brownish-gray tones, blend in quite nicely:

One tip that I could offer birders who are searching for this species is to stop looking for a large white gull - even Ring-billed sized is too large! Sabine's is about the same size as a Bonaparte's Gull. Scan the water's surface and watch for any dark, protruding irregularities. Sabine's bobs its head frequently when feeding on the water's surface and a diligent observer should be able to pick up on this movement.

We approached this bird for better looks like any smart birder would and we weren't disappointed. Birders on our boat, led by Captain Bob Fisher, observed this feeding behavior which recalls a lazy phalarope picking food from the water's surface. Everyone enjoyed good views and off it went, passing boat #2 and then boat #1:


Other gulls found on the lake include this hatch-year Franklin's: 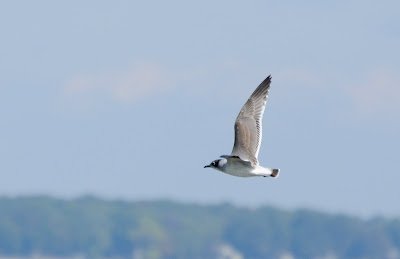 And three Lesser Black-backed Gulls, including this 3rd cycle: 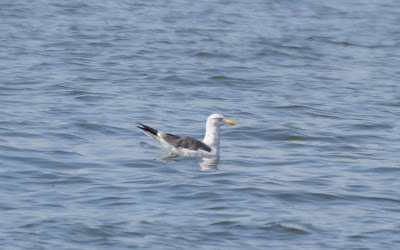 The night before our trip, birders observed 2 Laughing Gulls while conducting a lakewatch and one more the morning of, making it a 7 gull weekend for this site. The fact that no Laughing Gull or adult Sabine's were found during the boat ride or throughout our afternoon birding adds to the mystery of the movements of these gulls.
at September 25, 2011
Email ThisBlogThis!Share to TwitterShare to FacebookShare to Pinterest

Case of the Hidden Tertial

What exactly are tertials? Tertials are the innermost secondary feathers closest to the body. Each wing typically has three, and on gulls, these feathers are elongated and quite noticable (on the standing bird). Adult and near adult gulls of most species have tertials that are tipped with white, forming a tertial crescent. Some species have small and unappreciable tertial crescents, whereas others, such as this adult Mew Gull (L.c. brachyrhynchus), have large and bold tertial crescents that contrast nicely with the gray upperparts.

On some species, the secondaries are broadly tipped with white, forming a skirt that usually merges with the tertial crescent, as in this Western Gull (L.occidentalis):


Techinally, the tertials qualify as flight feathers, but functionally, they protect other flight feathers such as the bases of the primaries and parts of the secondaries when the wing is closed; thus, they act as coverts just as much as they do flight feathers.

While studying a group of several hundred "parking lot" Ring-billed Gulls the other day, I encountered this 2nd cycle with black-marked tertials:

If the tertials are the innermost secondaries, then one should be able to see this black mark in flight when the wing is completely spread, yes? Here's a flight shot of this same bird: 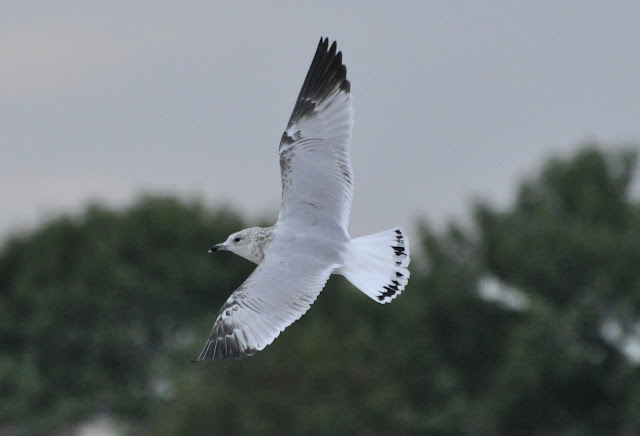 I was expecting to see these black-centered feathers at the proximal part of the wing, just where the secondaries meet the body. I was obviously missing something and needless to say, this bird started driving me nuts! I watched it land again and again making sure it was indeed the same individual that I followed in flight - there was no doubt that it was. It was obvious that the tertials were tucked away somewhere, but where? I went home and consulted several sources and finally found my answer in Grant's identification guide: "Note that the scapulars extend back as the wing is opened, covering the tertials completely in flight" (p.25).

The scapulars, along with the interscapular area known as the mantle, are what we typically call a gull's back. The scapulars cover the gap between the bird's wings and body. The 3-4 longest scapulars, also known as subscapulars, extend far enough when fully grown so that they line up with the trailing edge, and occassionally beyond. Species with small scapular crescents show a noticeable break in white along the trailing edge as the inner secondaries approach the body.

A gull with a notable scapular crescent will show more white along the part of the trailing edge that meets the body. such as in this adult American Herring Gull (L.a. smithsonianus): 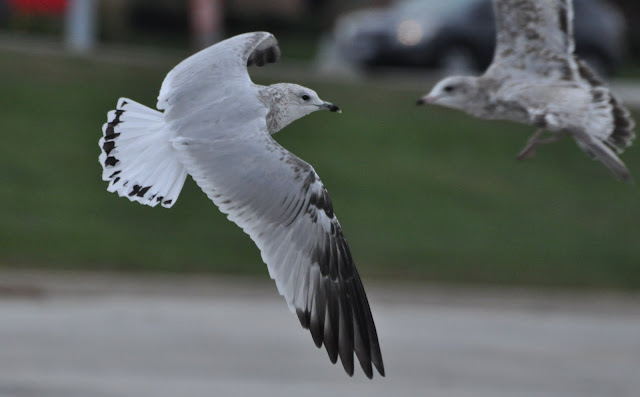 As it opened and lifted its wing, it became easier to see exactly where these marked tertials were tucked: 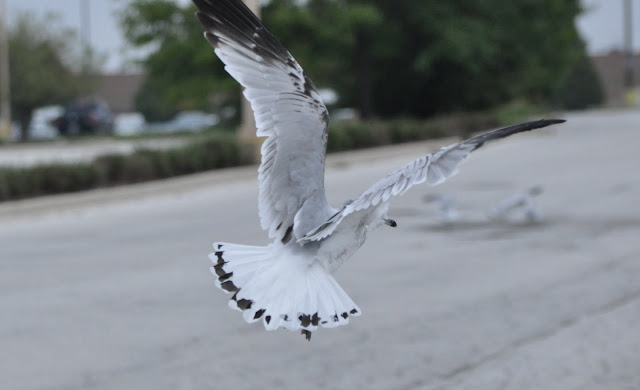 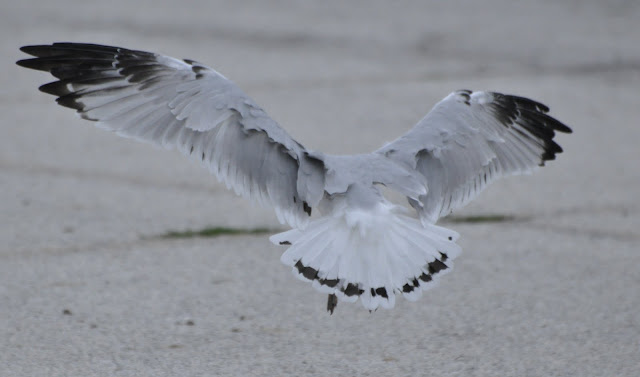 I think I may have overlooked Grant's note because the scapulars - on the standing bird - don't seem long enough to cover the tertials. However, once the wing is spread, the tertials are pulled in and the scapulars are extended back, forming two layers of feathers with the scapulars on top and the tertials underneath. My mystery was solved!
at September 10, 2011
Email ThisBlogThis!Share to TwitterShare to FacebookShare to Pinterest

I participated in my first lakewatch of the season today at Miller Beach in Gary, Indiana. This site ranks among one of the best in the Midwest for jaegers and some of the rarer gulls such as Sabine's, Little and Black-legged Kittiwake. The only catch to birding here is that one may spend an entire day squinting at unidentifiable birds a mile out into the horizon and still not see anything rare. Although this sort of birding can be very challenging at times, the rewards are great for anyone wishing to work on their in-flight identification skills. Plus, there aren't many other places us urbanites can go without extensive travel to see some of the species I mentioned above. A key ingredient to great birding at Miller is a stiff north to northwest wind off of Lake Michigan, but even then, there's no guarantee. Bring a scope and overdress for cold weather!

After finishing up my lakewatch with the Grube party, I decided to walk the length of Miller Beach from the concession stand at Marquette Park to the USX impoundment - 4 miles back and forth. I've always wanted to try this walk, hoping perhaps something good would come in off the lake. I've been told by several people in the past that the beach proper is usually bereft of birds and staying stationary is the way to go when birding here. Occasionally, birds land on the beach, but overall, birding this site is strictly in the form of lakewatching. I went on with my walk and thought, if anything, I would at least have an opportunity to evaluate the local Ring-billeds and Herrings. About 80% of the adult Ring-billeds that I encountered were growing the outer 2-3 primaries. This molt stage gives the standing bird an interesting appearance. Some appear to have very short wing projections or zero wing projection such as this individual:


I stopped several times as I approached the USX impoundment and the walk took a bit longer than expected, but when I did get there, I found several jaegers (positively identified were an adult Long-tailed and 2 juvenile Parasitics), 4 Willets and 1 possible Marbled Godwit - one after the other. Nice sized flocks of Common and Black Terns were moving through which is always promising.


After about 45 minutes of scanning the horizon at the impoundment, a 1st cycle Bonaparte's gave me a good run. This individual had what seemed like no secondary bar (perhaps an illusion at such a distance). The ear spots appeared so large that they gave me the impression of what looked like a juvenile Black-legged Kittiwake's hindcollar. If it wasn't for this bird's weak M-pattern, I may have seriously called it a kittiwake - of course being in early September is reason for pause. Why would a juvenile kittiwake in September have a weak carpal bar? Generally speaking, September is for Sabine's and November is for kittiwakes. October is up for grabs. When viewing lone birds like this at almost a mile away, the imagination could easily spin out of control. My senses are usually recalibrated after the first few lakewatches of the year. This idea is very similar to how one has to retrain their ears to the various sounds of wood warblers when spring rolls around.

A few minutes later, a dark-mantled gull with narrow wings and pointed wingtips approached from the east some 400 yards from shore. I instantly ruled out the two common gulls that are found close to land, Ring-billed and Herring, based on the all dark primary tips. I stayed on this bird for a few more seconds as it continued to inch closer and closer (by the way, 400 yards is pretty close when doing a lakewatch). I thought the only thing this could be is a Laughing Gull, and sure enough, as it worked its way west past the impoundment, it proved to be a second cycle LAGU:

Laughing Gull has never been common on any of the Great Lakes, but recently, it has become somewhat of a rarity on the Indiana lakefront with numbers declining over the last decade. An opposite trend seems to be in place on the Chicago lakefront as of 2005.
﻿﻿
Data compiled by Amar Ayyash. Source: Meadowlark.﻿﻿