Since at least 2009, this adult Kumlien's Iceland Gull has returned to the same marina to spend its winters. Most interesting is that it holds a strict winter territory similar to a raptor. It perches atop a "No Wake" sign at the harbor mouth and does not associate with the other gulls. In fact, any gull that enters the harbor mouth is swiftly chased off by this northern beauty: 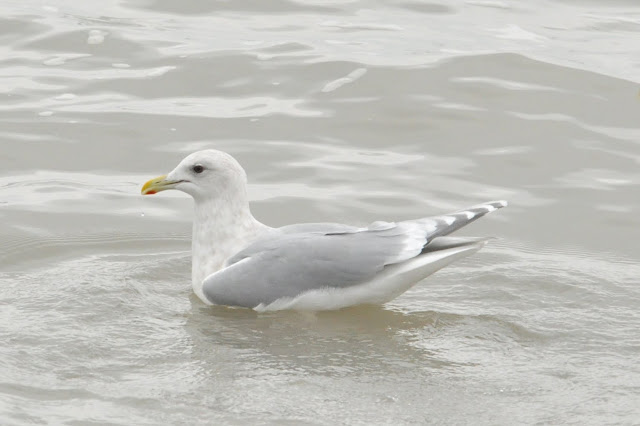 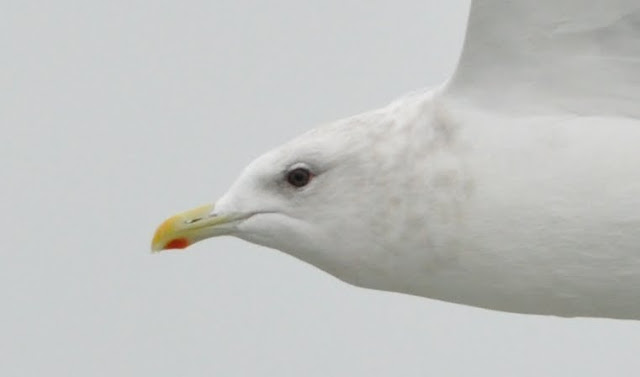 at December 26, 2012
Email ThisBlogThis!Share to TwitterShare to FacebookShare to Pinterest

It's been brought to my attention that the usage of the term "4th cycle" may be a bit misleading. I often use 4th cycle for birds that are very close to being adults, but may show a few signs of immaturity. For instance, this American Herring looks mostly adult, less its pink bill with black subterminal markings that are a bit more defined than a winter adult. Also note the sparse black marks on the tail: 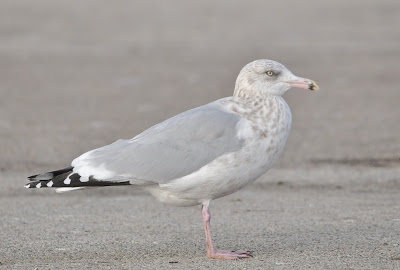 Another example of what I would call a 4th cycle is this Thayer's with just a few specks on the uppertail and the black subterminal marks on the bill:
Although these individuals may very well be in their 4th plumage cycle, there is no definite way to prove that without more evidence from banded individuals. How can I be sure this isnt' a very advanced 3rd cycle, or even a somewhat retarded 5th cycle? So, from this day forward, I've chosen to abandon the usage of "4th cycle" without inserting a disclaimer such as "possible 4th cycle". Alvaro Jaramillo first brought this to my attention and argued the term "near adult" is much more informative and less assuming - I agree!

I do feel, however, that we should continue ageing 1st, 2nd and 3rd cycle birds as such since we know so much more about what each generation of those feathers should look like, for the most part. I am tentatively choosing to label birds with marked tails, tertials and sub-adult like bills "3rd cycles". I will be happy to adjust the usage of this term if anyone can provide me with a 4th cycle+ example of a bird showing these features. Although there may be some guess-work involved here as well, it's a convenient system that we as field observers must have in order to communicate.
at December 17, 2012 21 comments:
Email ThisBlogThis!Share to TwitterShare to FacebookShare to Pinterest

Greg Neise and I teamed up for some Lake County gulling on Saturday. We hit the LC Fairgrounds first where we were treated to this:

We went back and forth about the possibility of it being an intermediate Thayer's/Kumlien's, and although it may be, I leaned towards Kumlien's because of the limited markings on the primary tips, but especially because of the unmarked P5 - this has not been documented in the leading identification papers on Thayer's Gull: 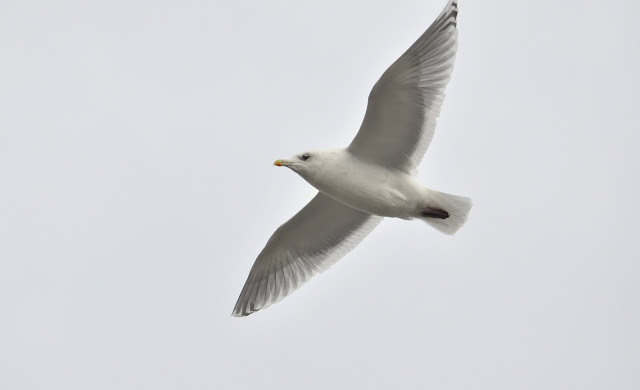 We then headed for North Point Marina, running into some nasty snow/rain mixture along the way, but just as we were approaching our destination, the rain stopped and it cleared up with partial sunshine!

We found 2-3 Kumlien's types and 2-3 Thayer's - no Glaucous or LBBGs,  which was somewhat of a surprise. 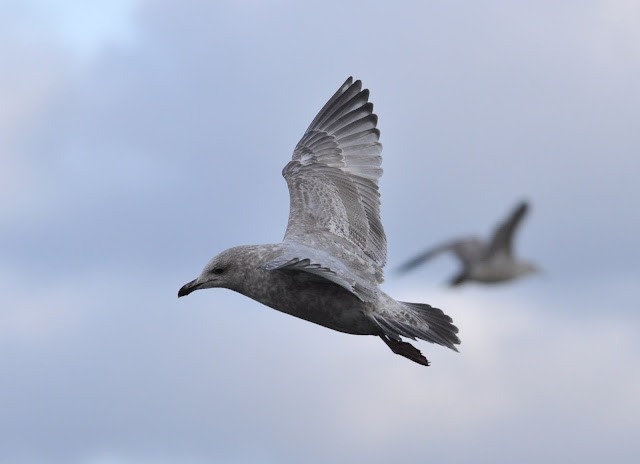 We also had this beast of a 2nd cycle Herring with an almost completely unmarked bill:

at December 11, 2012
Email ThisBlogThis!Share to TwitterShare to FacebookShare to Pinterest

Here's an adult-type American Herring with a mostly pink bill:

The visible primaries have a perfectly looking adult aspect and the upperparts appear solidly gray, but the bill pattern suggests a sign of immaturity.

Here's what the open wings and uppertail look like: 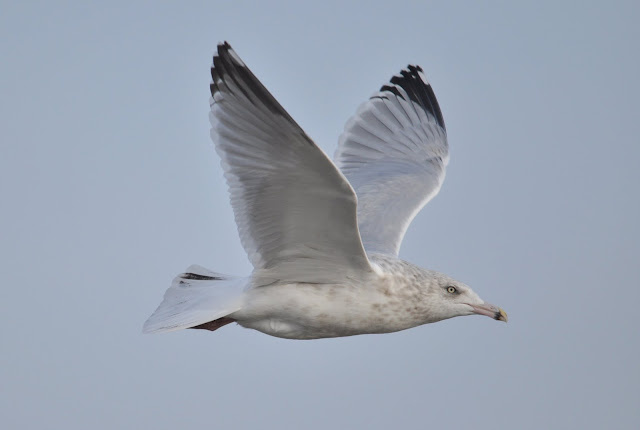 Note the dirty alula and marked rectrices. This individual is not a definitive adult, but rather, a 4th cycle bird.

Also of interest are the bold black outlines to the shafts of the the primaries and greater primary coverts. Is this another sign of immaturity?
at December 03, 2012
Email ThisBlogThis!Share to TwitterShare to FacebookShare to Pinterest

Apparent Tone in Blackish Wingtips and Angle of Observation

It's no secret that a single photo of a gull at one point in time can be very misleading. This post is just another example of that. Specifically, note how the apparent shade of this bird's wingtips go from "sooty black" to nearly "jet black" depending on its angle to the observer:

This seems like a common problem with Thayer's/Kumlien's types and Glaucous-winged hybrids such as this individual:
﻿ 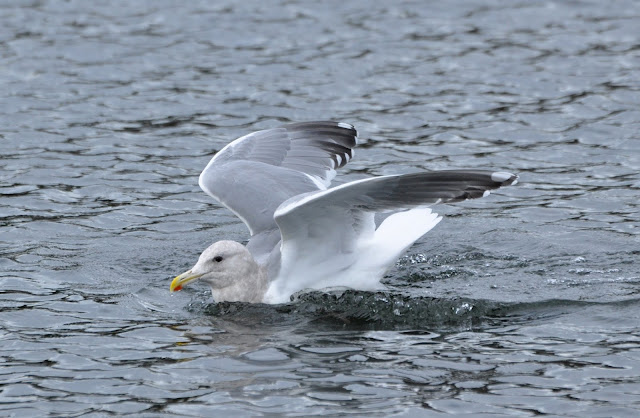 Note the "apparent" change in lighting. This is due to a slight change in angle (by both the observer and the bird). In the top photo, I observed the bird on my right, slightly from the front. In the bottom photo, the bird is now slightly to my left, viewed from behind. There was no change in environmental conditions or camera settings in these two photographs.The overall effect on the wingtips is dramatic and likewise on the gray upperparts.
Ultimately, I think it's safest to make an assessment of wingtip coloration in profile; preferably using a known species for side-by-side comparison.

﻿
at December 01, 2012
Email ThisBlogThis!Share to TwitterShare to FacebookShare to Pinterest

I went up to the Lake County Fairgrounds in northeastern Illinois this morning. There was a good presence of Thayer's Gulls (5) and Lesser Black-backeds (8). Best of all, birding was from the car which made the 30 mph winds a bit more tolerable. 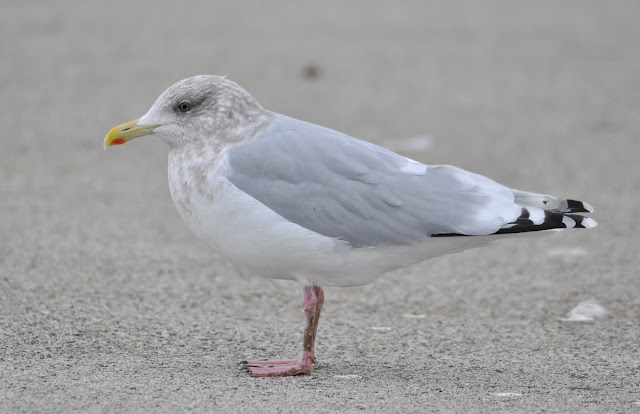 Adult Thayer's Gull. Lake County, IL. 23 November 2012
Both the Thayer's and the LBBGs were still undergoing outer primary and variable secondary molt:
Still waiting on this season's first Iceland and Glaucous Gull!﻿
at November 23, 2012 1 comment:
Email ThisBlogThis!Share to TwitterShare to FacebookShare to Pinterest

Can You Say "Astaxanthin"

Astaxanthin is the carotenoid thought to be responsible for the pink feathers we see in gulls (McGraw, Hardy 2005). I've written on this subject in a previous post, but I'm now wondering if this same carotenoid is responsible for the extra yellow/orange we see in bare parts.
﻿
Not only does this individual display pink in its plumage, but the bare parts are on hyper-orange!

Compare it to these ordinary March RBGUs: 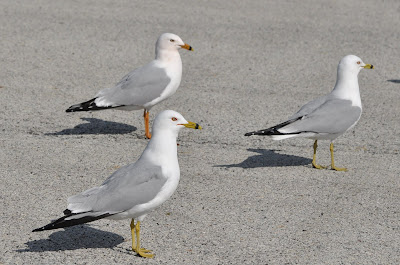 It's curious to say the least...
at November 16, 2012 2 comments:
Email ThisBlogThis!Share to TwitterShare to FacebookShare to Pinterest

Today was a relatively good day for BOGUs on the Indiana lakefront. I observed scattered flocks in Michigan City and at Miller Beach, but the real reward came in Whiting at the BP refinery where I found 71 individuals feeding at the discharge.

Sadly, Bonaparte's declined greatly on lower Lake Michigan after the 1990s. Of the four states surrounding Lake Michigan (Wisconsin, Illinois, Indiana and Michigan) it seems Illinois sees the least of this species.
at November 11, 2012
Email ThisBlogThis!Share to TwitterShare to FacebookShare to Pinterest

Primary Molt in an Adult Ring-billed

Adult Ring-billed Gulls typically complete their prebasic molts by the end of October. Here's a series of photos documenting primary growth of a known-age RBGU taken at Rainbow Beach in Chicago, Illinois. The photos are presented in three week intervals from late August through late October.This male was banded in the breeding season of 2007 at the Lake Calumet colony.

To read more about why this bird was tagged, click here.
at October 28, 2012 21 comments:
Email ThisBlogThis!Share to TwitterShare to FacebookShare to Pinterest 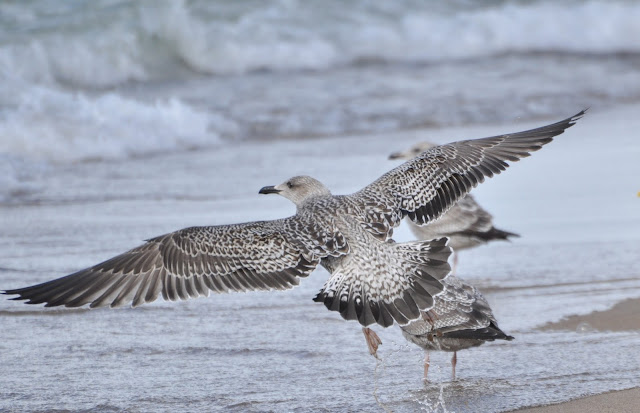 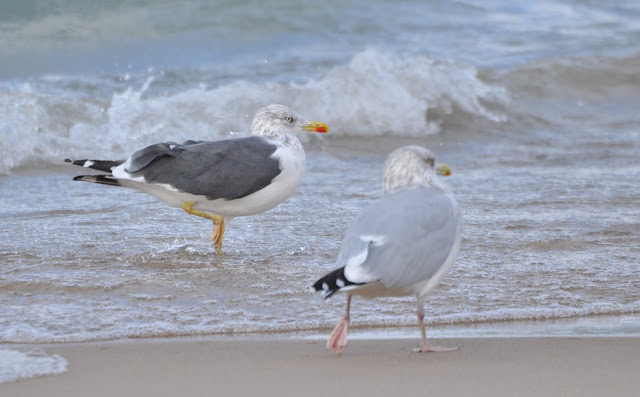 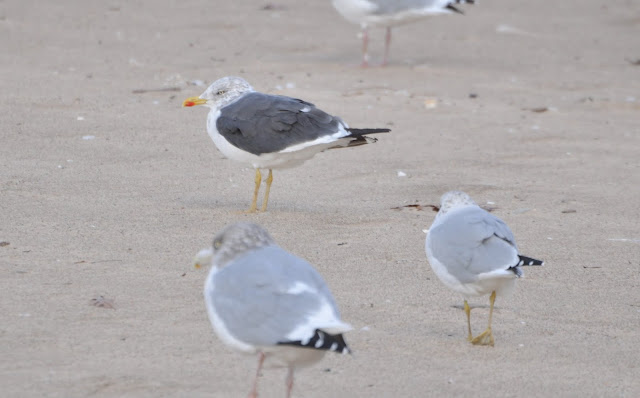 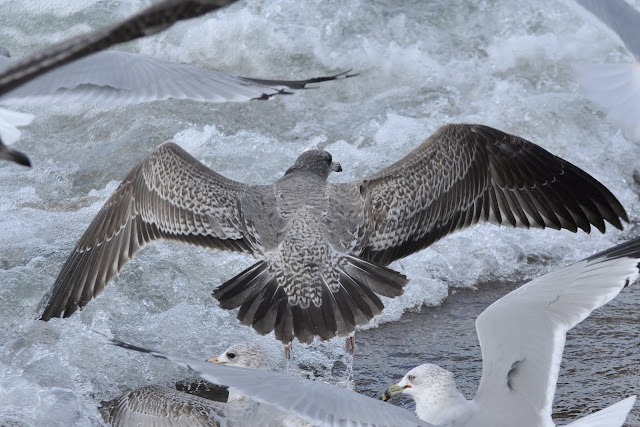