I found this first cycle Thayer's Gull at North Point Marina on Sunday. NPM is one of Illinois' premier winter gulling sites which sits almost directly on the Illinois/Wisconsin state line along Lake Michigan:


I consider this individual to be on the dark side for Thayer's. Here's this same photo lightened up:

One mark that I like to use in flight - although not popularized in our field guides - are the undertail coverts. Thayer's tends to display more neatly patterened undertail coverts that show horizontal bars:

at January 26, 2012
Email ThisBlogThis!Share to TwitterShare to FacebookShare to Pinterest

Chicago got its biggest snow storm of the season on Friday which tends to really change the gulling dynamics along the lakefront. So, I went to Calumet Park the next morning to conduct a "well-being" check on the gulls. The gulls were really receptive and no more than 5 minutes of chumming brought in this adult California Gull:

﻿
CAGU is now annual in Illinois with the majority of records coming from Lake County. The entire state averages maybe 1-2 birds per year. Coincidentally, this individual was found by Josh Engel on the Chicago CBC on Christmas Day. Almost a month later and 12 miles south, it continues to work the lakefront. The great thing about birding Calumet Park is that the state line is literally a rock's throw to Indiana. Any gull seen in Illinois is always a "to and from" Indiana bird, although not all birds in Indiana always enter Illinois. 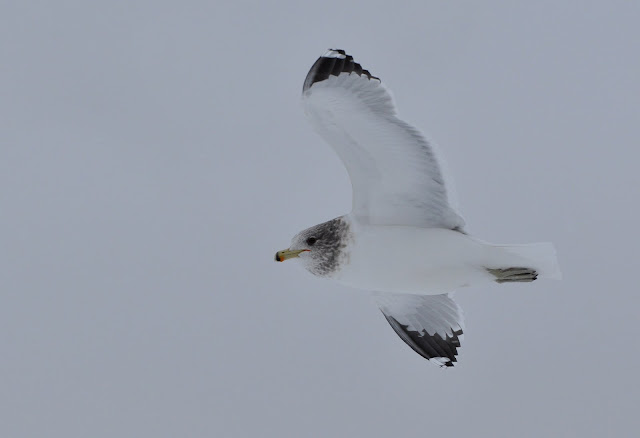 at January 21, 2012
Email ThisBlogThis!Share to TwitterShare to FacebookShare to Pinterest

A Taste of the Pacific Northwest

I finally made it out to Western Washington after having put this trip off for some time. My primary objective was to observe subadult Mew and Glaucous-wingeds, and to also gain more exposure to the myriad of hybrids known to this region. The word hybrid in this post will default to Glaucous-winged x Western types unless otherwise noted. This post is merely an introduction to the larids in this region and by no means is it meant to be an in depth treatment. I hope you find these photos beneficial.

My first stop was along the Duwamish River in Tukwila. Decent numbers of Thayer's Gulls (200+) are found on the rooftop of the Yellow Freight Truck Company:
Recent genetic data suggests Thayer's is more closely related to Glaucous-winged than Iceland Gull (Gay et al. 2005). I couldn't help but ponder this relationship every time I saw Thayer's Gulls among the numerous Glaucous-wingeds. One has to wonder why the bulk of Thayer's winter along the Pacific and not side-by-side with Kumlien's Gull along the North Atlantic.
Although the majority of Thayer's have darker irides, eye color is variable in this species. I found 5-6 pale-eyed individuals that could have easily been overlooked as Herrings in my home state. Luckily, Herrings are not very common around Seattle and so any gull with pale eyes was closely scrutinized: 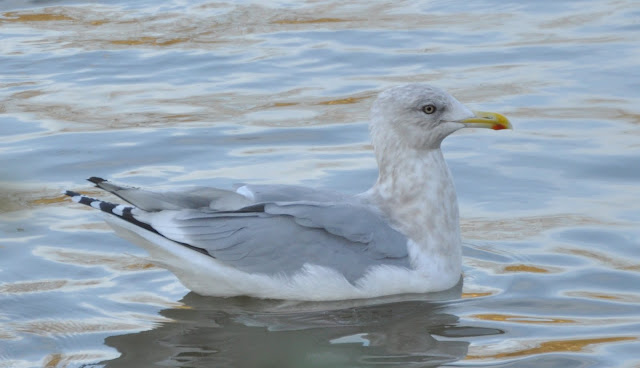 And another one in flight:
Although Glaucous-winged Gulls are year-round residents in Western Washington, it wasn't always obvious which birds were "pure". Here are several well within the limits of GWGU:
﻿
<> </>
The copious number of hybrids at every site I visited made for some very interesting identifications. It's worth noting that the hybrids in the Puget Sound area have a much more Glaucous-winged look to them, whereas birds on the coast tend to display more Westernish traits.
Consider this 1st cycle bird:
On the surface, its plumage matches Thayer's, but size and structure are sufficient for ruling out that species. The larger bill, muscle-neck, sagging belly and broad wings all point to a larger taxon - this is a typical Olympic Gull. Side-by-side comparisons are much easier than assessing lone birds:

Here's another Thayer's look-alike but note the overly large proportions for that species: 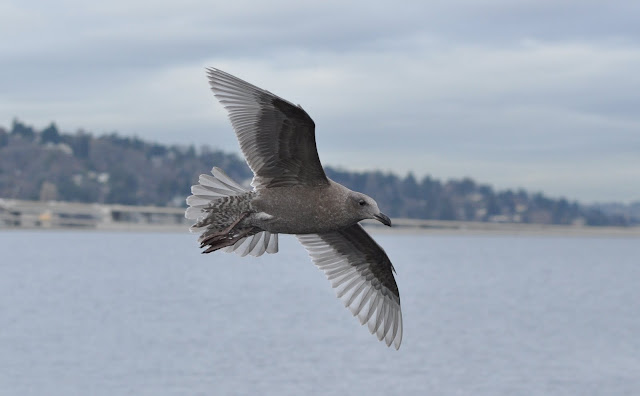 
What follows is a set of non-1st cycle hybrids that represent both ends of the continuum. Try to assign various traits to each parent species: 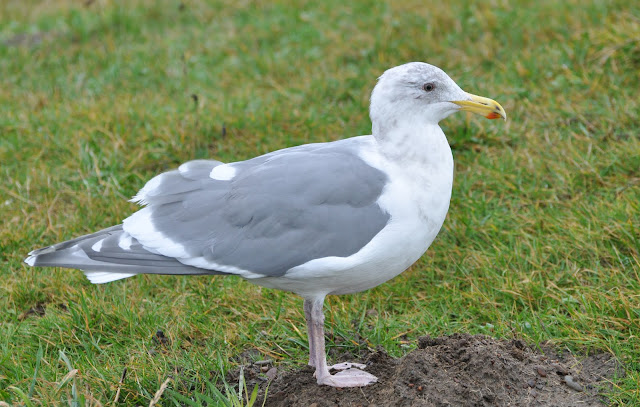 There seemed to be no shortage of Glaucous-winged x Herrings (so called Cook Inlet Gulls). These individuals tend to show smaller bills that are bicolored and paler scapulars than Olympics. Compare the next two birds:

Another objective of mine for this trip was to gain more field experience with subadult Mew Gulls (L.c.brachyrhunchus). Although I've observed decent numbers of Mews in my visits to California, most were adults. I was very "fortunate" to visit the Metro Sewage Ponds on New Year's Eve with the Discovery Park CBC party. Many of the locals preferred to stay out of the sewage ponds on this day but I readily accepted the job of going in and counting, one by one, 658 Mews. I couldn't imagine a better way to spend the last day of the year!

From an identification standpoint, some 1st cycle (and perhaps even 2nd cycle) individuals can superficially resemble Ring-billed, but after seeing enough 1st cycles on this trip, I'm convinced that there really is no way to confuse the two in the field (given more than a snapshot view). Besides the more petite bill and dove-like head of Mew, its uppertail and undertail coverts differ
tremendously from RBGU: 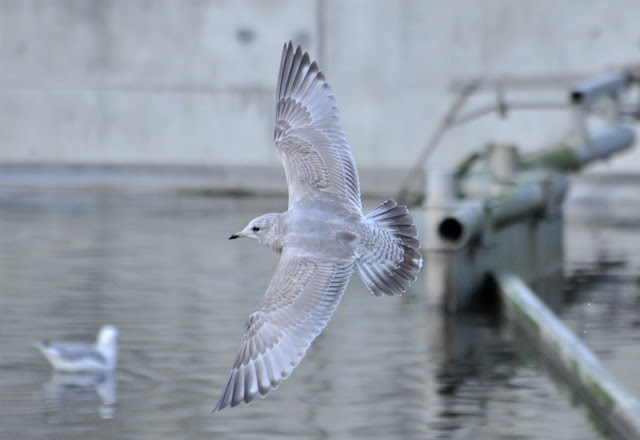 One thing I noticed on all of the 1st cycle Mews on this day was that none had replaced any of the upperwing coverts or tertials. By late Fall, the overwhelming majority of Ring-billeds will have some new (gray) feathers on the upperwing like this bird:


Mew Gulls will, at best, show faded or bleached upperwing coverts before the 2nd prebasic molt and so this could help avoid confusion with similar aged Ring-billeds:


Another common feature that I noticed on these first year Mews is pale edging on the primaries tips: 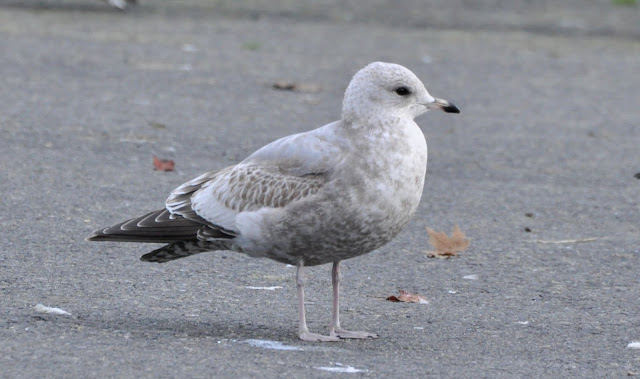 This individual below is the closest I could find to a Ring-billed-look-alike, structurally:
Note the more decurved culmen, lack of gray upperwing coverts, barred undertail coverts and pale edging on the primary tips. I've yet to see a 1st cycle Ring-billed with this aggregation of marks. Here's this same bird out of the water:

Here's a nice comparison of a 2nd cycle MEGU and RBGU photographed during the same session:
As for identifying adult MEGUs, Ring-billed would be easily eliminated.

I photographed these adult Mew Gulls just hours before concluding my trip and heading to the airport. All were photographed at Sayer's Park on Lake Washington: 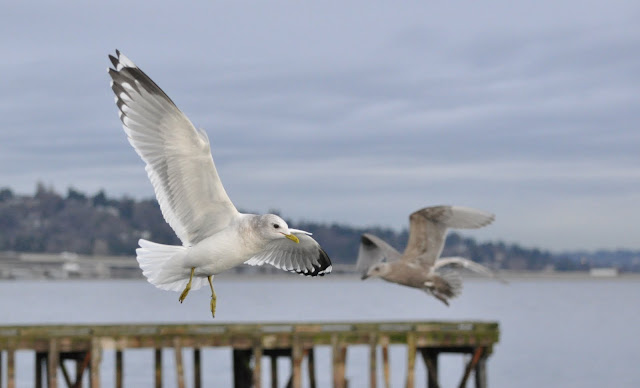 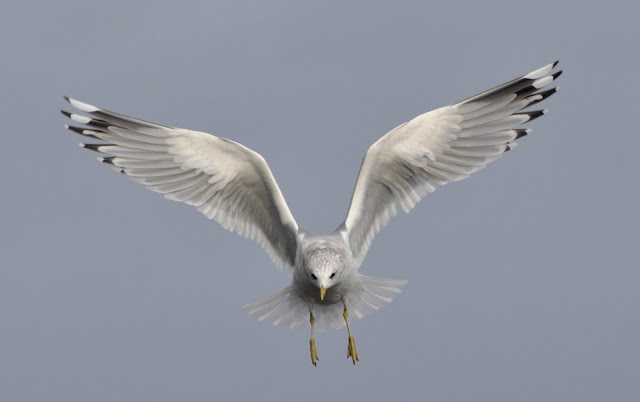 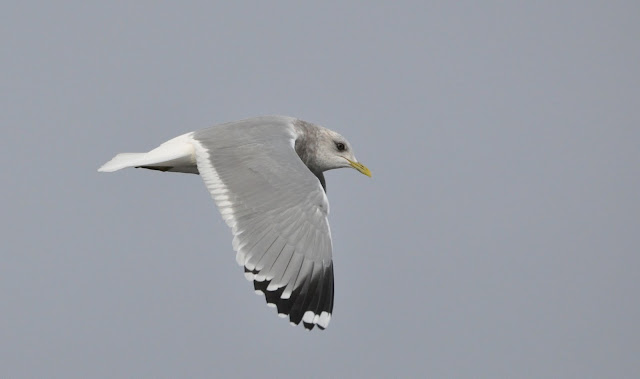 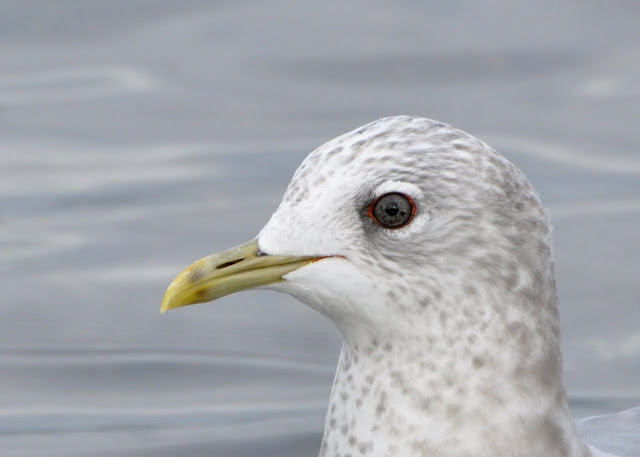 I'd like to thank Seattle's go-to-guy for gulls, Michael Donahue. Michael was kind enough to spend an entire day showing me around and birding with me. I was moved by his knowledge of the area's gulls which was nothing short of impressive.

The Puget Sound area certainly possesses a unique dynamic of North American larids. Something tells me I'll only be able to stay away for so long before going back!
at January 07, 2012
Email ThisBlogThis!Share to TwitterShare to FacebookShare to Pinterest
Newer Posts Older Posts Home
Subscribe to: Posts (Atom)