The Illinois Ornithological Society held its 11th annual Gull Frolic on Saturday, February 18th. As usual, the turn out was great with over 170 participants - extraordinary birders and extraordinary people.

I had the good pleasure of presenting at this year's event which was truly an honor. This event always fills up pretty fast and registration is limited due to building capacity and fire codes.

Unfortunately, gull numbers were way down this year and this seems to be a direct consequence of the mild winter we're "enjoying" (NOT). The harbor was almost completely ice-free. Fortunately though, the gulls started moving in around 2:30 p.m. where several of us enjoyed the following:

Perhaps the highlight of this year's Frolic - for me - was being "reunited" with this Black-legged Kittiwake:


This kittiwake was an ill bird that Larry Krutulis and I picked up last spring at Montrose Beach (you could read more about this here). It ended up dying the next morning and that was the end of that story for me. While looking through a few gull skins brought to the Frolic by the Field Museum's Doug Stotz, I was told this was the same bird that Larry and I had at Montrose last year. Here it is the day before, premortem:

It's good to know the specimen was retrieved and prepared by the museum for educational purposes.
at February 22, 2012
Email ThisBlogThis!Share to TwitterShare to FacebookShare to Pinterest

An adult Kumlien's Gull is now back at Hammond Marina in Indiana for at least the 4th consecutive year. I don't typically think of our wintering gulls as holding territories, but this one sure does (click here to read more about this behavior):

It's late apperance is probably best explained by the mild winter we've had thus far. In any event, it's great to have such a reliable (and beautiful) Kumlien's to go see whenever I need a quick Iceland fix. 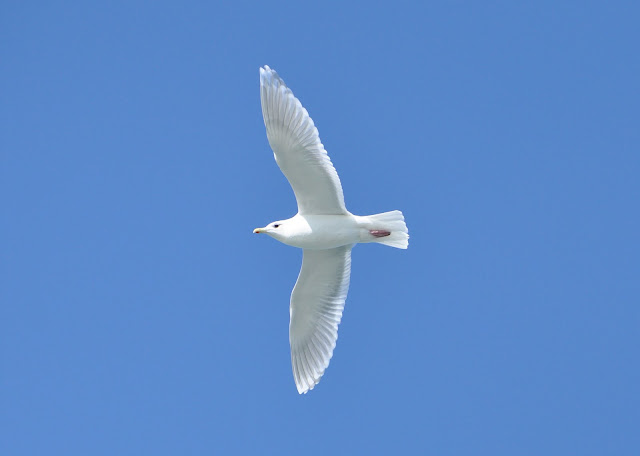