The plumage aspect appears to be that of a 2nd cycle large white-headed gull. But how is a 1st cycle eliminated? The fairly significant amount of gray on the back along with the pale iris (zoom in to see this) should be enough to sway your opinion in favor of 2nd cycle. The bi-colored bill is also helpful, but it should be used with caution as many 1st cycle species have this bill pattern in their first winter. Bill patterns are at best supporting field marks, not definitive ones. Further, it's not uncommon for a 2nd cycle large gull to retain a nearly all-black bill. Overall, the upperwing coverts and uppertail coverts have a very marbled feel to them, agreeing with a 2nd cycle plumage.

With open-wing photos such as this, the primary pattern and uppertail pattern should be the most revealing feather tracts. The pale and silvery inner primaries rule out species like California or Lesser Black-backed Gull. The thinner bill rules out bigger species, such as Glaucous-winged Gull.

Nearly everything seen on this gull can technically be found on a Herring Gull - all but the pattern on the outer primaries. The outer primaries show a classic "Venetian blind" pattern. This is suggestive of a white-winged taxon, and Thayer's Gull immediately comes to mind. The inner webs are lighter than the outer webs, and this is seen all the way up the primaries where they meet the primary coverts. The outer primaries are a tad paler than the black that's blemished with dark brown on Herring. The contrast here is a "soft' appearance that is more elegant than Herring. With Herring, the two-toned effect is somewhat lost and not as continuous. This is mostly because the inner webs on Herring aren't as pale as in Thayer's.

Finally, looking closely at the subterminal portion of the inner web of p10, we can see hints of a mirror (often referred to as a "ghost mirror"). It's not uncommon for Thayer's Gull to show this mirror in 2nd basic (and even more so in Kumlien's). In my experience, it's quite rare to find any 2nd cycle American Herring with this pattern.

Someone used to seeing many Kumlien's Gulls may struggle to eliminate a dark Kumlien's, but the outer primaries are dark enough, as are most of the secondaries and tailband, to keep this one comfortably in the Thayer's pile.

I identified this bird as a 2nd cycle Thayer's Gull, likely a female due to its petite bill, head and body. It's worth seeing a couple of more images of this beauty to reinforce the "elegant" plumage aspect: 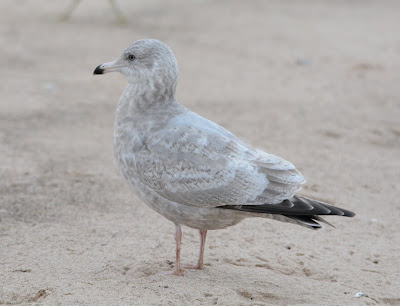 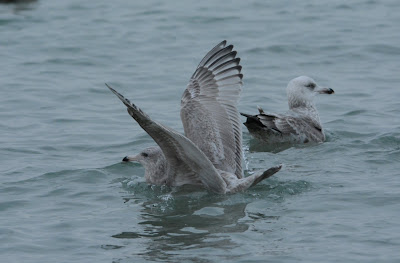