We begin 2016 with classic, large white-headed gull, muddiness. This adult type white-winger evoked some interesting discussions this month. Here were the answers I received from you guys:

Back to our quiz bird. In the field, we'd want to gauge its size by comparing it to other species if possible:

This wasn't a very large gull, averaging smaller than most of the surrounding Herrings. For this reason I've dismissed a Glaucous-winged x Herring Gull hybrid (which can show a similar wingtip).

It's clear from the photo above that the wingtip is significantly paler than the black shown on the adjacent Herrings. This is outside of my comfort zone for a "pure" Thayer's type. For some people, this would be a perfectly acceptable Kumlien's Iceland Gull, and it very well may be. However, my reason for identifying it as a Thayer's/Kumlien's intermediate type is the extent of black on p5. 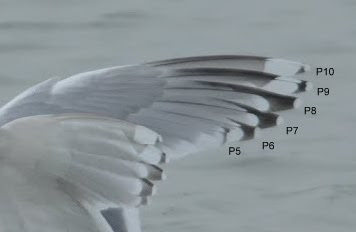 It's currently accepted that the majority of Kumlien's (in core Kumlien's winter range) don't show a complete subterminal band on p5 as is seen here. Further, the amount of pigment bleeding onto the inner webs of p9 and p10 is more reminiscent of what we see in Thayer's Gull. If the wingtip was a shade darker - a more genuine black - I would've readily identified our quiz bird as a Thayer's Gull.

A couple of comments in the answers provided mentioned eye color as a reason why this would be a Kumlien's Gull. It should be known that iris color in both Thayer's and Kumlien's is highly variable - some Kumlien's have dark eyes while some Thayer's have pale eyes. In short, eye color is not a helpful field mark in trying to distinguish these two taxa.

It's not uncommon to find wingtips like this here in the Lake Michigan region and elsewhere in the Great Lakes. These birds are controversial at best, and some gull enthusiasts have recently begun calling them "Lake Michigan Gulls" as they appear to be the center of the divide. Our safest bet is to think of Thayer's/Kumlien's as a continuum rather than trying to pigeon-hole every individual in one box or the other.
at February 01, 2016
Email ThisBlogThis!Share to TwitterShare to FacebookShare to Pinterest
Newer Post Older Post Home