It's clear we have a hooded gull in what looks like definitive adult plumage. The partial hood suggests the bird is in basic plumage (as opposed to alternate).

The upperparts are relatively dark, helping us narrow down our choices to Sabine's, Franklin's or Laughing Gull. The longer legs could help rule out Sabine's as this a short-legged species that often resembles a shorebird when viewed on land at a distance.

The semi-hood looks similar to the what one may see on a Franklin's in the non-breeding season. However, Laughing Gull can also show this half-hood (depending on how much of the hood has molted in - or out). Further, the white apicals on the primaries may tempt one to call this a Franklin's, but adult Laughings often show white tips to the primaries (especially in late fall/early winter when the feathers are renewed). 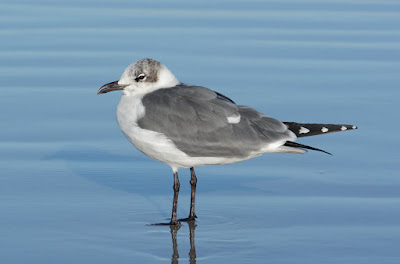 The narrow eye crescents, long legs and long wing projection all help identify our quiz bird as a Laughing Gull. Seeing the relatively thick bill with flat, sharply sloped tip, makes the identification much, much easier.