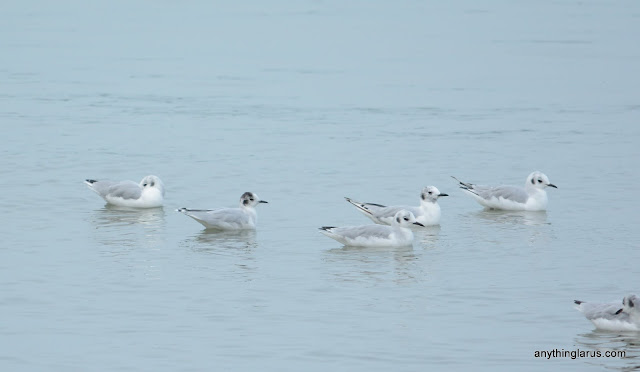 All but one of our quiz birds appear to be Bonaparte's Gulls. We can base this on the black ear-spots and small, pointy, thin bills. Laughing and Franklin's Gulls both have darker gray upperparts and noticeably longer and heavier bills.

But what of the smallest bird (second from left) with the more extensive dark cap? This individual is striking and would likely be the first bird to grab your attention in the field. The "extra" amount of black on the cap is interesting but far from diagnostic. Much more important is its apparent size and proportionally smaller bill. Only one species with such a small build fits the profile: Little Gull.

Notice how the Little Gull, and the gulls directly to its left and right have short primary projections. All three of these gulls have dropped and/or are growing new flight feathers (complete prebasic molts). The black mark seen above the Little Gull's tail is a subterminal band on a newly grown primary. Here's an open wing showing this: 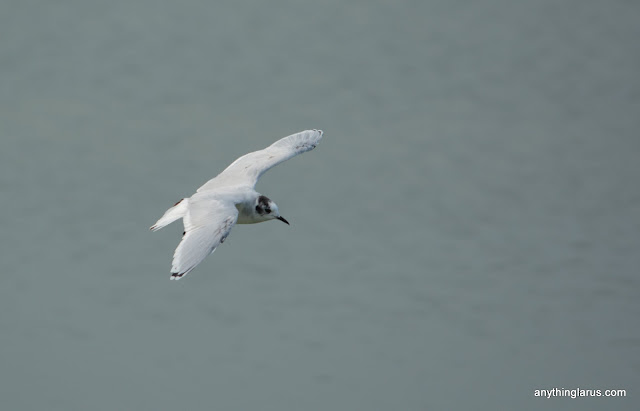 In this image, you can see there are a few "old" outertail feathers that have yet to be replaced. Also, the dirty black smudges on the greater primary coverts and other regions of the upperwing all point to a sub-adult. Adult Little Gulls lack black markings on the primary tips. It'll be another year before this one (presumably) takes on a definitive adult plumage aspect. Therefore, we'll age this Little Gull as a 2nd cycle "type".