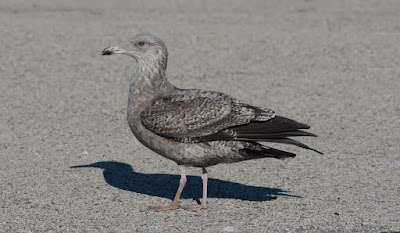 The September bird appears to be a large 4-year gull. The trickiest part about this month's quiz - in my opinion - is correctly aging our gull. At first glance it looks like a 1st cycle, but a more careful look should reveal a 2nd cycle type.

It's difficult to be sure what the true primary projection length is because those feathers are raised. But the projection does look suspiciously short, indicating the outer primaries are still growing. The tips are rounded which favors a 2nd cycle type over a 1st cycle. The newer, gray, central scapular feathers do resemble a 1st cycle type as they show dark marks along the shafts and some barring. 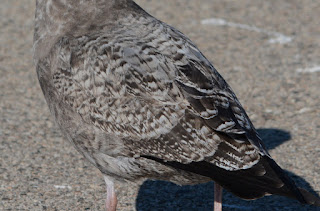 But scapular patterns are highly variable in large gulls and they can often betray a bird's true age. The wing coverts, on the other hand, are a bit more reliable when aging. Notice the obvious marbling pattern to the greater coverts and distal tertial edges. This is more typical of a 2nd cycle gull. Also notice in this images the rounded tips to the outermost primaries.

But what species? The bird is not very large or bulky. The relatively small and straight bill call to mind species such as California Gull, Lesser Black-backed Gull and Herring Gull.

The paling iris and pink legs should immediately dismiss thoughts of a California Gull, and the relatively light gray scapulars raise doubts about this being a Lesser Black-backed Gull. I identified this month's bird as a retarded 2nd cycle type Herring Gull, photographed in Northern Illinois. January.
at October 01, 2016
Email ThisBlogThis!Share to TwitterShare to FacebookShare to Pinterest
Newer Post Older Post Home