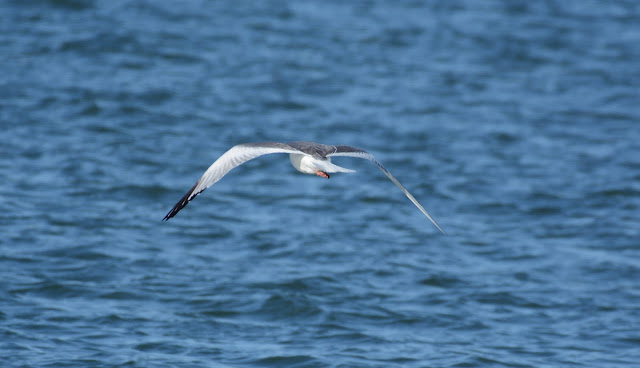 Age: The gray back and proximal wing coverts suggest an adult bird, but which species?

Identification: Note that Bonaparte's is easily ruled out due to the white trailing edge. Black-legged Kittiwake would be a good guess, but the pattern on the upperwings and primaries contradicts its age. That is, only a young Black-legged Kittiwake would show the white triangle seen here, but it would be coupled with a black carpal bar. Also, traces of a black tailband would be present if it were the more common kittiwake.

From the looks of it, this appears to be a "smaller" gull, mostly recalling Sabine's Gull. But there are some small, subtle, features on this bird that nail the identification: Notice the white sliver on the outer scapulars on the right wing. Zooming in, there is a thin white partition between the scaps and upperwing coverts. This is not found in any Sabine's Gull, but is found in Swallow Tailed-Gull. And. And. And...last, but not least...adult Sabine's have black-ish legs - not the relatively bright pink legs seen in the photo above.

I think we can be sure that if we ever saw our April Quiz bird, head included, we'd have no trouble agreeing on Swallow-tailed Gull.