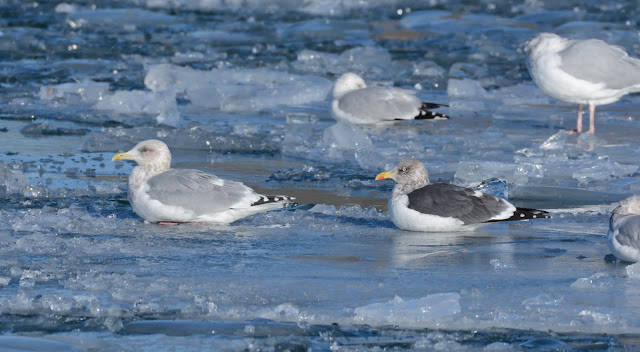 Age: Focusing on the two individuals with heads upright, we can be fairly confident these are adult, large white-headed gulls (LWHG).

Identification: The black-backed gull should be the easier to identify from this duo. Given its relative size, we should readily dismiss Great Black-backed Gull. This appears to be a slim and long-winged gull. The red gonys spot is enlarged and the bill itself is relatively straight with virtually no expansion at the gonys. The streaking on the face is made up of thin, pencil-like, streaks. All of these features make this yellow-eyed critter a Lesser Black-backed Gull

The noticeably larger gull to the left with paler gray upperparts is superficially similar to a Herring, but it isn't one. Notice the black on the primaries is not a jet black like the other gulls in the photo. That, along with the extensive white on the primaries should convince us we may have something other than a Herring in view. The darkish eye and greenish tinge to the bill match up nicely with Thayer's Iceland Gull, as does the extent of pigment on the primaries.