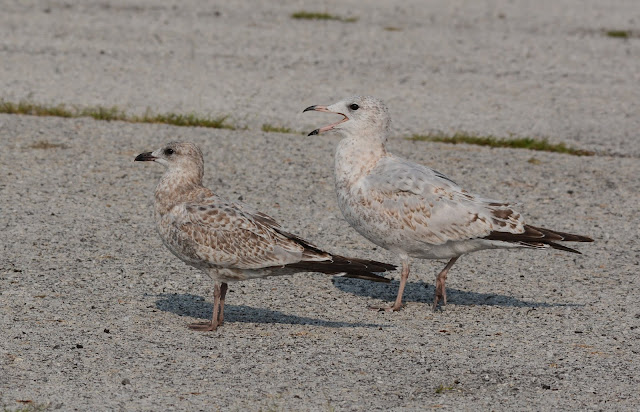 Age: The darker bird on the left has an all-dark bill with a fair amount of juvenile scapulars and wing coverts. It's safe to age it as a 1st cycle. Given the leg color and largely juvenile plumage, we can assume it is a hatch year (HY). But what about the paler gull on the right? It too looks fine for a 1st cycle. Note its predominately brown-patterned wing coverts, post-juvenile scapulars with brown shaft streaks, notched tertials and pointed primaries. The gull on the right is undergoing a more extensive post-juvenile molt (gray lesser coverts coming in as well as a few inner median coverts). It also has a more advanced bill pattern and leg color.

Identification: The apparent difference in size and plumage aspects may suggest two different species, but this isn't the case. Based on bill size and overall proportions, they don't look like any of our large 4-year gulls. Both birds have relatively messy and contrasting upperparts and this is typical of young Ring-billed Gulls. The paler bird on the right is a typical 1st cycle Ring-billed. The pink bill base, paling white head and neck, silver-gray post-juvenile feathers and hints of a lightly marked tail band are supportive. The smaller bird on the left is also a Ring-billed, but perhaps one that hatched later in the breeding season. Mew Gull is eliminated by several features: 1) the wide bill base, 2) the gray inner greater covert, which Mews don't show in their hatch year, 3) the largely messy and contrasting plumage with dark-spotted post-juvenile upper scapulars. Mew shows a more warm aspect with softer textures and feather edges that are more broadly pale and uniform.

Both of these hatch year Ring-billed Gulls portray some of the variation found in this age group. Dark versus pale, and small versus large are appreciable differences that are encountered routinely.