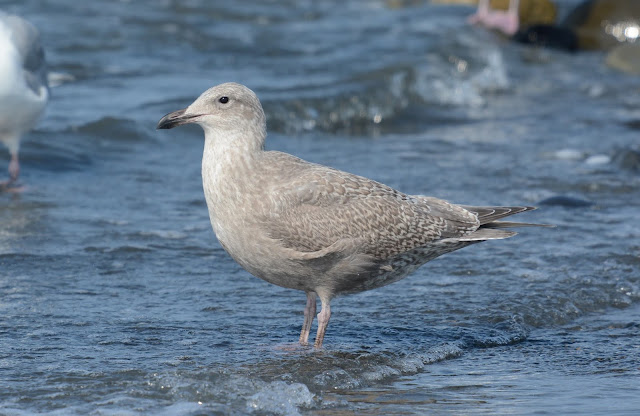 Age: A rather standard 1st cycle, large gull, with what appears to be all juvenile upperparts.

Identification: Our October Quiz is a good example of why knowing date and location is indispensable information at times. This individual was photographed on the Kenai Peninsula along the Cook Inlet in late August. The most expected taxon here, at this time of year, consists of Herring x Glaucous-winged hybrids (so called Cook Inlet Gulls). Armed with this information, we must eliminate that mix first and foremost.

There are a number of features that we may attribute to Glaucous-winged, such as the plain and paler upper tail, pale edges to the primaries, high eye placement, grayish-brown plumage aspect and fine upperwing covert pattern. Less obvious are the Herring features, consisting of a paling bill base, notched scapular pattern, and perhaps most important, the darker primaries.

Two confusion taxa that may be considered away from this hybrid zone, and/or at a later time in the year, are Thayer's and Glaucous x Herring hybrid.

For Thayer's, we'd generally expect an all-dark bill without the wide base. Also, this individual appears big-bodied with higher than normal eye placement and a shorter primary projection (which admittedly may be due to posture or growing wings). Furthermore, the lesser and median coverts on this bird appear too "busy" with wavy markings that aren't as boldly patterned as is typically found in Thayer's.

As for Glaucous x Herring hybrids, that combination is difficult to rule out structurally. However, plumage aspect on that hybrid is often brighter with a frostier appearance, with more white-centered upperparts, as opposed to the grayish tones seen in some Glaucous-winged x Herrings. Again, location and time of year support a Cook Inlet Gull.