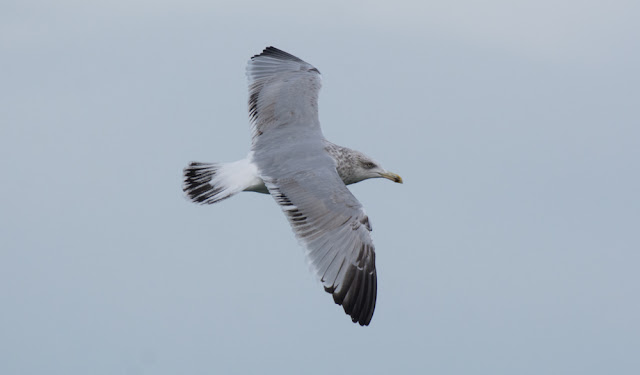 Age: It appears this is a large four-year gull, and judging by the plumage aspect, we can estimate it is in its 3rd plumage cycle. The adult-like, gray, inner primaries, with broad white tips are sufficient enough to steer us away from 2nd cycle, but the black secondary centers, broad tail band, marked primary coverts and brown cast to the wing coverts assure us this isn't an adult.

Identification: To begin identifying this gull, we should ask which large four-year gull has a pale eye at this age, relatively paler gray upperparts and a proportionately-sized bill. California Gull is ruled out by the pale eye. Ring-billed - a 3 year gull -  may come to mind but this is a larger and more broad-winged bird. Furthermore, 2nd cycle Ring-billeds never show tailbands this wide. Our December bird is a fairly typical Herring Gull, except perhaps for the lack of white in the outer primaries. At this age, Herrings usually show a mirror (or two) on the outer wing, but on rare occasion may not. It is worth mentioning that gray feathers mixed with brown pigments almost always make sub-adults appear darker than typical adults. Add to this an already underexposed image and the result is a bird that appears darker than what we normally associate with American Herring Gull.