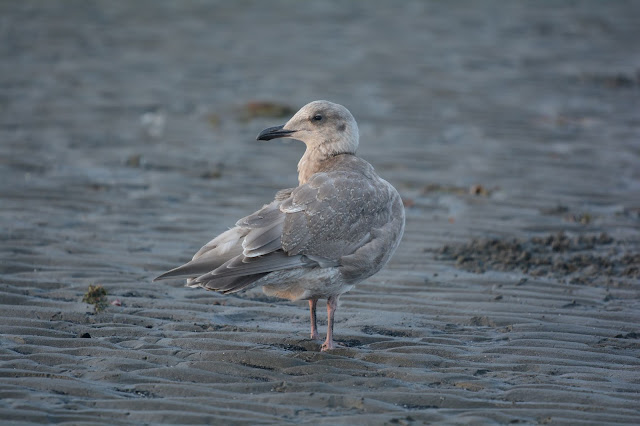 Age: The plain brown upperparts and pointed primary tips suggest a 1st cycle which appears to be mostly juvenile (1st basic). The dark auriculars may also clue us in to a bird that has hatched not too long ago.

Identification: The milky-brown plumage aspect, with muted and plain wing coverts are very suggestive of Glaucous-winged. The eye is disproportionately small for such a large face, also suggesting a Pacific Northwest taxon. The outer primaries and uppertail contrast with the rest of the plumage, indicating a darker-winged species may be involved. This is usually a draw between Western and Herring, and knowing the location and time of year would be helpful. The bill isn't too large, or at least the tip isn't as bulbous or blob-tipped like many Western x Glaucous-wingeds. Further, the upperparts all have distinct notching to their edges, something frequently found in Herring x Glaucous-wingeds. To further rule out Western influence, note that the covert rows don't have any wavy barring or checkered patterning.

This individual was photographed on the Kenai Peninsula in late August, the origin of many Herring x Glaucous-winged Gulls. Another photo below in profile, giving a better idea of how dark the primaries are - a little too dark to be comfortably called a pure Glaucous-winged in the Cook Inlet region. 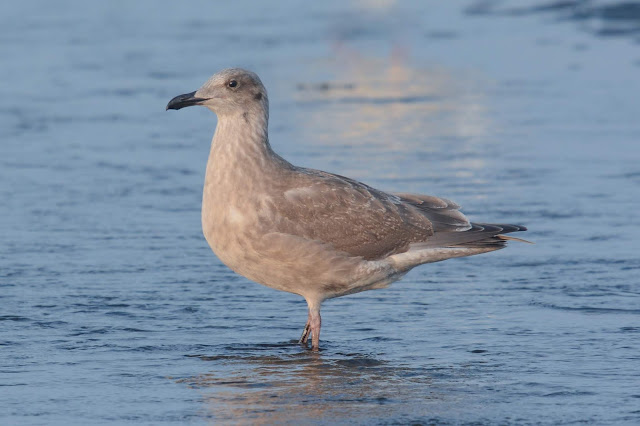