Age:
Somewhat of a tricky plumage, but when compared to the 2nd cycle Herring in the background, we can be confident about categorizing this as a larger four-year gull. Based on the rounded tips to the primaries (see the innermost primary closest to the tertials, for instance), it's safe to suggest 2nd cycle. The plain, marbled, greater coverts and soft stippling on the outer edges of the lower tertials also support 2nd cycle.

Identification:
This overall delicate-looking gull has smaller proportions, with a small head and short, straight bill. Looking critically at the primaries, note they're actually a dark brown and not black. The tertials are a lighter brown, and the contrast from wingtip to wing coverts is a gradual one (not as contrasy as the Herring in the background). There aren't many gray, adult-like, scapulars on the back and that's somewhat helpful. The mostly black bill for a 2nd cycle four-year gull is also a good supporting field mark for this species. If you guessed Thayer's Gull for this month's quiz, congratulations and well done. Based on size, structure and plumage, I identified this individual as a 2nd cycle Thayer's Gull. Open wing below. 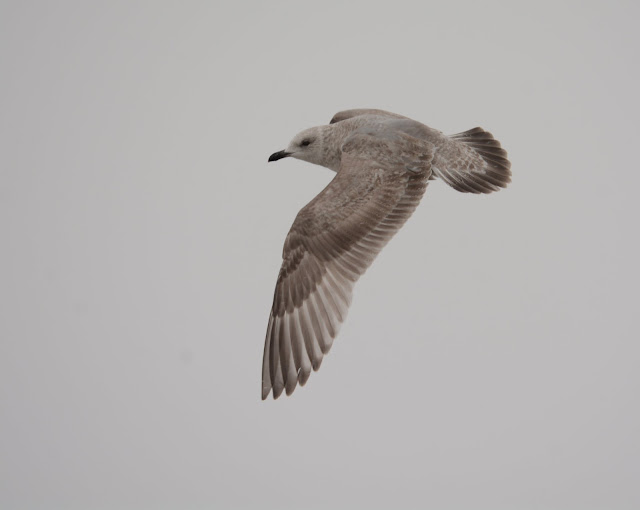