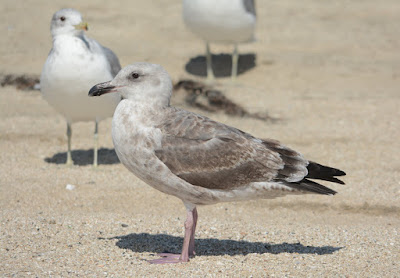 Age: The wing coverts have a plain but marbled pattern, pointing away from a first cycle gull. The tertial tips also show relatively broad pale tips with a similar marbling effect - this all points away from a first cycle.
The short primary extension suggests the outer primaries may still be growing, and when zooming in, one can make out rounded tips to these primaries. This looks like a typical 2nd cycle type large white-headed gull.

The bill appears large and strong when compared to the adult California Gull in the background. In addition, the quiz-bird has thick legs and a noticeably larger and heavier body when compared to the Cali Gull. The eye placement is somewhat high and forward, and this gives a more beady feel to the eye, especially for such a large head. Looking closely at the newer scapulars, they appear dark gray and resemble Western and/or Yellow-footed Gull.

As always, it would help to know the date and location when assessing any photograph: mid-September, San Mateo County, California. A 2nd summer Yellow-footed Gull would typically have much more advanced, adult-like gray upperparts at this point, and would be rare anywhere in the United States away from the Salton Sea. This month's gull is a fairly straight-forward 2nd cycle Western Gull completing its wing molt via a 2nd prebasic molt.

at August 01, 2015
Email ThisBlogThis!Share to TwitterShare to FacebookShare to Pinterest