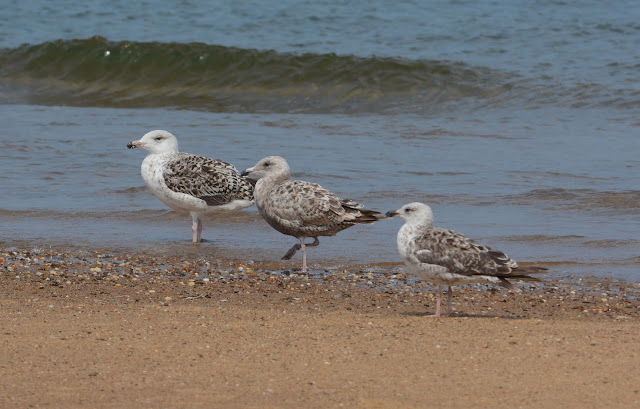 This month's birds all appear to be 1st cycles. A close look at the various feather tracts suggests some new feathers have recently molted in, while other feathers are old and worn. The overall appearance is that of 1st summer gulls.

Immediately, a striking size difference is noted with the leftmost bird appearing the largest. The huge body and head, coupled with its dark back and white body is hard to confuse for anything other than a Great Black-backed Gull.

The middle gull is comparatively "medium" in size, and its plumage pattern/color look pretty typical of a 1st summer Herring - this variable age class will often show polka dot spotting on the newer, 2nd generation wing coverts as is seen here.

Finally, the smallest of the three gulls has a mostly black bill, white head and darker, more solidly-filled wing coverts and tertials. It has long wings with an attenuated look to the rear - a classic 1st summer Lesser Black-backed Gull shape.

This photo nicely demonstrates the general size differences between these 3 species when comparing same sexes.

at September 01, 2015
Email ThisBlogThis!Share to TwitterShare to FacebookShare to Pinterest