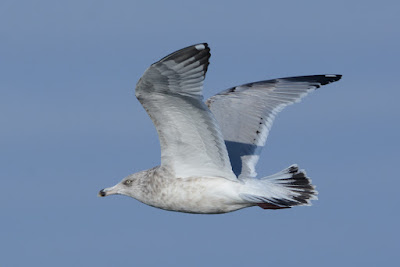 Age: We can be sure this individual is not sporting definitive adult plumage. The heavily marked tail, ink spots on the upper side of the secondaries (right wing), black-marked primary coverts, and smoky brown pigment on the under wing coverts along the leading edge (left wing), all make this a relatively straight forward bird to age. It has adult like gray secondaries and primaries, with broad white tips, ruling out a 2nd cycle. This individual would best be aged as a 3rd cycle type if we can agree it's a large, four-year gull.

Identification: The gray upperparts don't appear dark enough for any black-backed species. Which gray-backed gull has pale eyes and a medium size bill? The black subterminal tip to the bill superficially resembles Ring-billed Gull, but our bird has more of a menacing look with a barrel chested-body and broader wings. Of course if we were observing this bird in real life, we'd immediately get a sense for size and structure, but we don't have that information in a single snapshot. However, if it were a Ring-billed, it would be a 2nd cycle as this is a 3 year gull. The tail band is too wide for Ring-billed with black coming up more than half the length of several rectrices. Here's a typical tail band on a 2nd cycle Ring-billed Gull. It helps to zoom in on what look like pink feet (Ring-billed is yellow-footed).

Our November Quiz bird is a 3rd cycle Herring Gull, a species we should be comfortably familiar with anywhere in North America. Ottawa County, Michigan. December.
at December 01, 2018
Email ThisBlogThis!Share to TwitterShare to FacebookShare to Pinterest
Newer Post Older Post Home