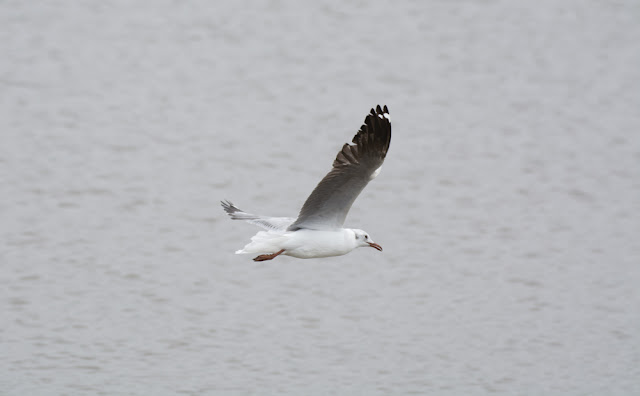 Age: Aging this individual is difficult given this limited view to the upperwing. We have what appears to be a hooded gull based on the post-ocular spot. On one hand it appears to have a dark trailing edge to the secondaries, suggesting a 1st cycle, but also shows two distinct mirrors on p9-p10. What appears to be an all-white tail is more indicative of a bird beyond its 1st plumage cycle.


Identification: This month's quiz elicited some interesting responses, ranging from Bonaparte's, Little, Black-headed, Gray-hooded and even Brown-hooded Gull. Only 4 people (out of 38) had the correct ID: Gray-hooded Gull. We can easily dismiss Bonaparte's as that species doesn't show a dark underwing. Little Gull is shorter-winged and lacks the relatively large maroon bill seen here - nor does it show mirrors per se. Black-headed Gull comes close to this, especially the dark underwing, but that species also lacks mirrors on the outer primaries, and instead, shows a distinct white wedge on the outermost primaries. Brown-hooded comes to mind. A 1st cycle Brown hooded has a mirror-band that typically shows three mirrors that are larger and more elongated than our quiz bird. If this were an adult Brown-hooded - which it is not - the outer primary tips would be completely white from underneath. The only reasonable choice left is Gray-hooded. The broad, smokey-gray to black pattern on the underwing, two reasonably-sized mirrors embedded in a black wingtip, maroon bill and what looks like traces of a faded gray hood help pin this identification.

This species has only been recorded in North America twice - once in Florida and once in New York.
Our February bird was photographed in November in coastal Peru. The upperwing reveals a distinct wingtip pattern exhibited by this species, as well as the darker secondaries seen on adult types. 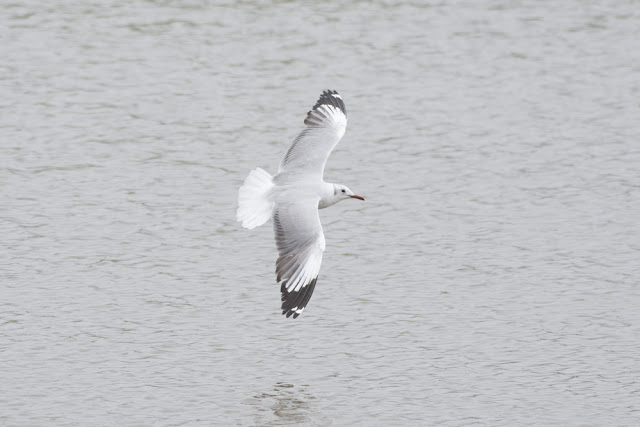