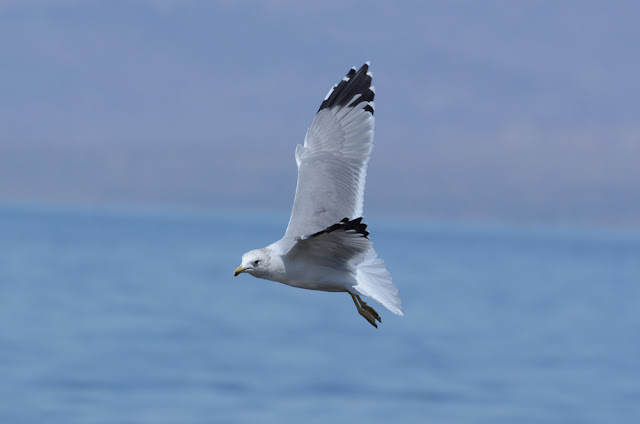 Age: The plumage aspect looks typical of an adult-type, large white-headed gull. The outer two primaries, p9-p10, are growing out, with all flight feathers newly molted. This signals the end of a definitive adult prebasic molt. Assuming this individual was observed in the northern hemisphere, the time of year is likely late-summer to early fall.

Identification: The gray upperparts appear too pale for any black-backed, but also suspiciously darker than our pale, silvery gray species (Ring-billed, Iceland and Herring). Looking closely at the legs, we find this is a yellow-legged species. Possibilities are Mew, Ring-billed and California Gull. The black-to-red bill pattern and apparent dark eye are nearly diagnostic here, eliminating the former two. The well-marked primary pattern, forming an extensive black triangle to the wingtip is strongly suggestive of California Gull, which is what this individual is.