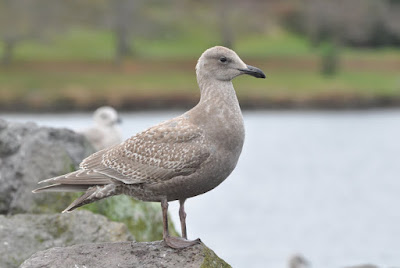 There were lots of answers submitted this month, ranging from Herring Gull to Iceland Gull. First things first, age: this is a pretty obvious 1st cycle with nearly complete juvenile plumes.

The pale edging to the primaries, as well as the color of the primaries (brown not blackish) rules out Herring Gull. Although this bird superficially resembles a Thayer's Gull, the drooping secondary skirt, heavier bill and higher eye placement push me towards a Glaucous-winged Gull. The wing coverts on this species are a bit more solidly filled than most similar-aged Thayer's. The scaps and overall plumage aspect also have a muddier look when compared to Thayer's. Of course if there were other species around to compare it to, one would use size and structure to help clue them in.

This Glaucous-winged Gull was photographed in the Seattle, Washington area in January. Some birds, like this individual, take on a very chocolaty plumage, making it appear similar to a Glaucous-winged x Western hybrid (so-called Puget Sound or Olympic Gull). Those birds tend to have more beady eyes, higher eye placement and more bulbous-tipped bills.
at May 31, 2015
Email ThisBlogThis!Share to TwitterShare to FacebookShare to Pinterest
Newer Post Older Post Home