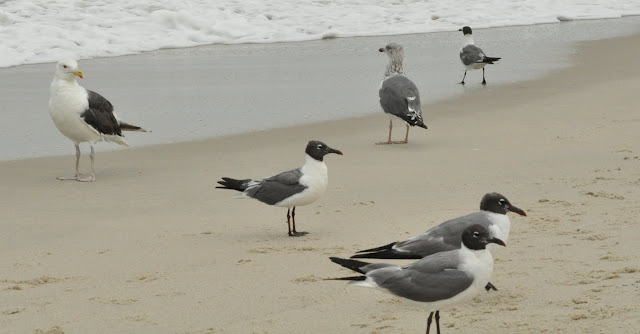 The theme this month is dark-backed species that are worn and molting. The appearance of these birds suggests it's Summer season.

Beginning with the hooded gulls, the 3 in front are all Laughing Gulls (longer, drooping bills, thinner eye crescents and little to no white on the primary tips). Franklin's is typically shorter-legged with body structure that's more compact. There's no reason not to label the 4th hooded gull in the back (facing away) a Laughing Gull either.

Now for the larger two non-hooded species. The medium-sized gull with the heavily streaked head to the right is a Lesser Black-backed Gull. The legs do not appear to be the mustard-yellow that's expected on this species, but this is age-related. Sub-adult Lessers commonly show pinkish leg color and retarded bill patterns, sometimes with extensive black, like this individual. The fine vertical head streaking is also unique to Lesser Black-backed when considering black-backed species in North America.

The larger gull to the left is the largest species we have: Great Black-backed Gull. Its jet-black upperparts, pinkish legs and overall large body size can't be mistaken for much else. Great Black-backeds tend to keep mostly white heads almost year-round in North America.