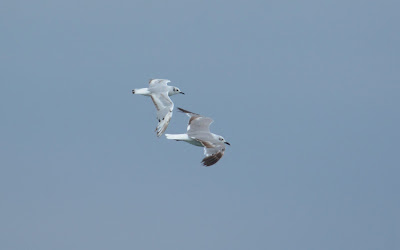 Age
This neat duo appears to be about half way done with primary molt. Thus, we can safely assume these estival plumage aspects were captured in the midst of the breeding season. The smaller bird on the left has a complete dark trailing edge to the secondaries and a complete tail band - a typical 1st summer "small gull". The larger and darker gull on the right also has vestiges of brown secondaries and retained 1st generation outer primaries - also indicative of a bird in its 1st summer.

The paler bird on the left has a tern-like bill and complete black trailing edge. The light gray upperparts and black ear-spot point to Bonaparte's Gull.

The larger bird with darker gray upperparts has a blunt bill that is proportionately large. Note how significant the bill shape and size is, as well as the shade of gray, when identifying these two. The black post-ocular smudge on the larger bird also hints at a hooded species. Its long pointed hand seems perfectly in line with Laughing Gull, and that's what it is indeed.

This 1st summer Bonaparte's and Laughing Gull are roughly a year old, and are assumed to be nonbreeders. Both birds are undergoing their 2nd prebasic molts Cape Cod, Massachusetts. July.
at August 31, 2017
Email ThisBlogThis!Share to TwitterShare to FacebookShare to Pinterest
Newer Post Older Post Home