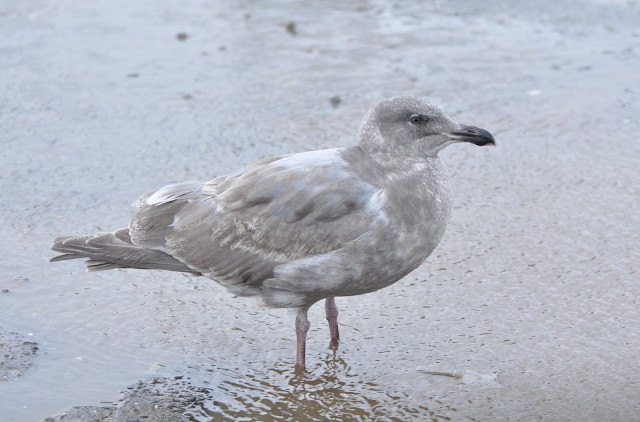 Identification: The smudgy head, neck and breast appearance is reminiscent of Glaucous-winged Gull. The "muddy" plumage aspect to the upperparts is as if the bird was powdered with soot. Retaining a largely dark bill into 2nd cycle is also quite common for many Glaucous-wingeds. The only feature on this bird that raises some suspicion as to whether it may be a "pure" Glaucous-winged, is the paling iris. Most Glaucous-wingeds retain a dark eye, but some exceptional birds take on a pale eye (usually as they age, and not quite this young).

It helps to know that this bird was photographed in Grays Harbor, Washington. December. There is a large chance of some Western Gull genes at play, with a smaller chance of Herring Gull involvement. The very dark primaries may be viewed by some as a blocker for Glaucous-winged, but I don't see them as a problem for a bird with such closely matching tertials and greater coverts.

For what it's worth, here's what would be "safely" identified as a "classic" 2nd cycle Glaucous-winged. Seattle, Washington. January. 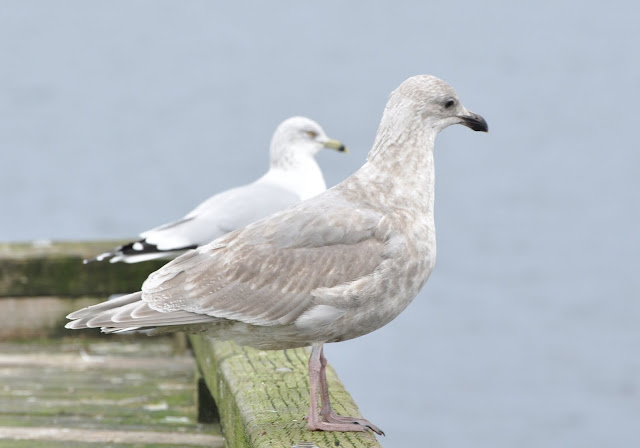 At any rate, we will settle for Glaucous-winged Gull for our July Quiz, with the unverifiable chance of some outside influence.
at August 01, 2017
Email ThisBlogThis!Share to TwitterShare to FacebookShare to Pinterest
Newer Post Older Post Home