A bird in the hand reveals information and provides insight that would be impossible to obtain in the field, even when using the best modern day optics. After reading enough measurements and averages in "Gulls of North America, Europe, and Asia" by Klaus Malling Olsen and Hans Larsson, I decided I would try to gain access to the gull skins at the Field Museum. I contacted David Willard from the avian division at the museum and he was very welcoming. I extended an invitiation to several birders and met with Steve Ambrose, Sam Burckhardt, Tom Lally and Walter Marcisz on the morning of 7 March, 2010. I had several objectives in mind which included a hands-on approach of comparing mantle shades, bill size and shape, and overall structure. I guess you could say this visit was very informal and more play than anything else.

The first thing I did was get my hands on a Pacific Gull (L.pacificus). This gull is known to some as Large-billed Gull or the Australian Gull. It's range is strictly along parts of Australia's coast. A couple of interesting tidbits about this species is one, it has salt glands which help reduce the amount of salt in the bloodstream, and two, it has the thickest bill of all gull species. 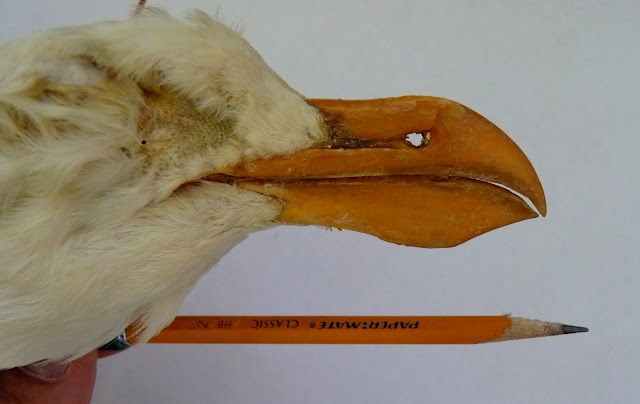 It's hard to appreciate this almost comical looking bill without the enitre bird. Compared to other gulls, the bill looks completely disproportionate. 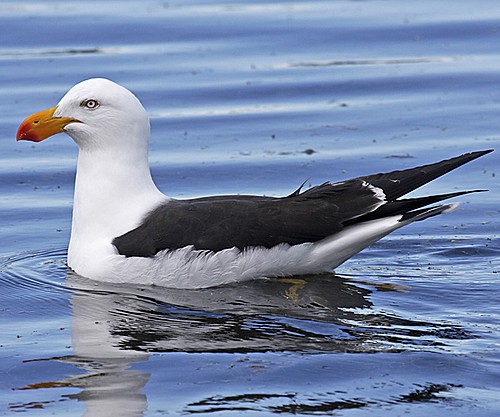 Walt Disney's animation movie "Finding Nemo" tried to do depict this bird since the movie was based around Sydney, Australia. The bill shape is greatly corrupted in this picture below and the mantle color is significantly lighter than it should be - but my children never knew the difference! 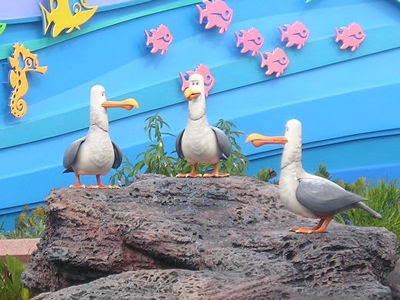 Pacific Gull's mantle color is much closer to the widely scattered Kelp Gull (L.dominacanus) of the southern hemisphere. It's interesting to know that PAGU has been driven out of much of its range surrounding the Sydney area due to the Kelp Gull.

Another interesting moment during our visit was this oversized Glaucous Gull that was much more goose-like than gull-like.

There are several races of Glaucous Gull but neither shows these proportions. We placed this bird next to a presumed male Great Black-backed Gull:

Anywho, something I had always wanted to do is get a side-by-side shot of Little Gull and Great Black-backed Gull: 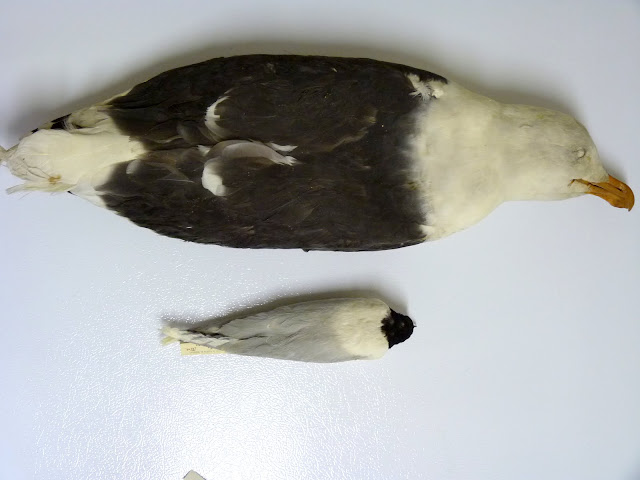 This shot speaks to how big GBBG is -- or is it a testimony to how small LIGU is? 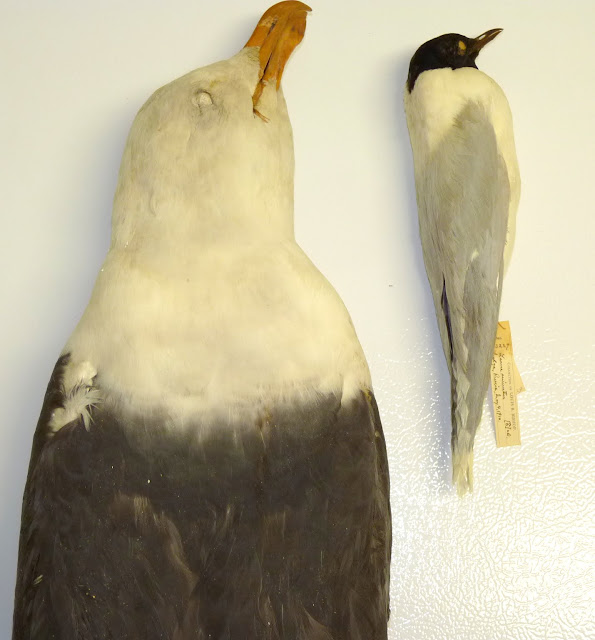 One can easily imagine how a GBBG can down a Dovekie for lunch.

We read in field guides that the head of Black-headed Gull is actually a dark brown. I never believed this whole-heartedly. This individual quickly eliminated my previous suspicions:

Although adult California Gulls have darker mantles than both Ring-billed and Herring, this mark can be unfaithful in the field depending on lighting and the angle at which the birds are being observed. Here is a side-by-side of all three species:

at August 21, 2010
Email ThisBlogThis!Share to TwitterShare to FacebookShare to Pinterest