Dorsally, this individual is a bit darker than a Ring-billed but paler than a Laughing Gull. Proportionally, it seems long-winged compared to the other Ring-billeds. The hood, especially around the bill and face, looks faded and I don’t think this is a function of the bird still molting. The eye is completely encircled by white feathers but a close-up of the face reveals the eye-crescents of LAGU. The color of the iris is darker than the average adult RBGU but paler than an adult LAGU. Leg color is more of an orange than the yellow of RBGU. The bill color is also more of an orange and not the reddish color seen on a pure LAGU. 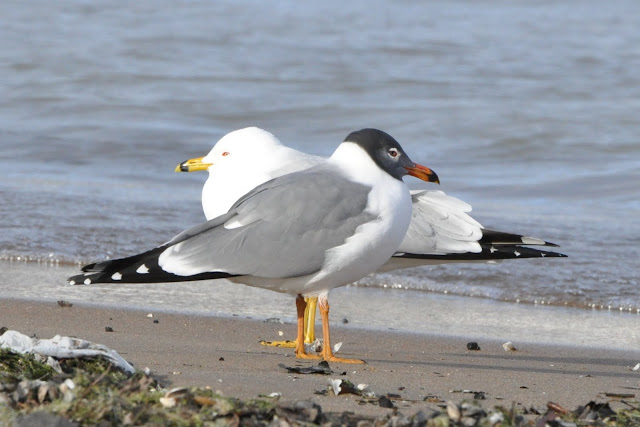 In flight, P10 shows a medium-sized mirror and the adjacent primary tips are with white terminal tips.
I watched this bird for a couple of hours and was able to get nice flight shots as it came in for chum, mixing in with the other Ring-billeds. It also spent a good amount of time vocalizing and giving its long call on the island of pilings that sits in the bay. It's voice is a bit higher pitched than a pure Ring-billed and it had a somewhat nasal quality to it -  Laughing Gull influence for sure 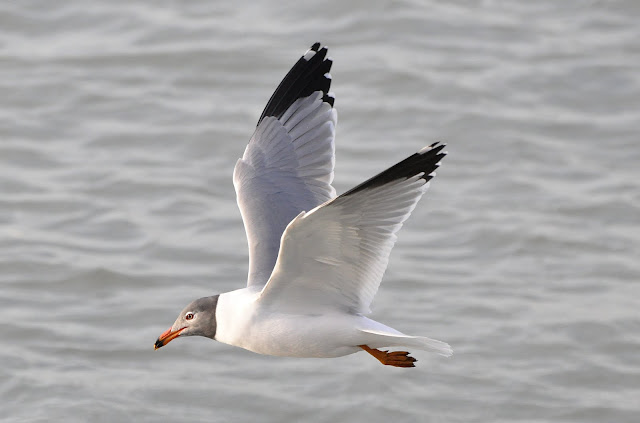 There is no evidence that this bird has ever paired up with a Ring-billed in the Chicago colony, although there is a well documented, first state record, of a Laughing Gull nesting with a Ring-billed in this same colony. The hybridizing did preceed the appearnce of this bird in the Chicago area. It's interesting to know that several of these hybrids have been spotted along the Lake Michigan shoreline. Wisconsin, Indiana and Michigan have all reported this hybrid combination. Howell and Dunn include a photo of one from WI on p. 14.

I've often wondered when our Ring-billed Gulls begin to return to the Great Lakes area from southern latitudes. This individual may be a good gauge for monitoring this as it sticks out like a sore thumb.  The week I first relocated it brought with it a new wave of Ring-billeds - the kind that start hovering over your head before you even start to chum! Our wintering Ring-billeds (probably those that summer a bit north of us) like to keep a respectable distance between themselves and humans.
at March 18, 2011
Email ThisBlogThis!Share to TwitterShare to FacebookShare to Pinterest
Newer Post Older Post Home