I birded Clinton Lake in Illinois yesterday. I started my birding at the Parnell Bridge at sunrise while waiting to meet up with others for a Yellow Rail walk. The bridge separates the northern most section of the lake (Salt Creek area) from the eastern and southern part of the lake. Historically, this site was a reliable spot for Little Gulls but no longer is (which holds true for most other sites across the Midwest).

Bonaparte's were streaming in over the bridge which presented a good photographing opportunity (even more so when I would use the trees as a blind). Interestingly, if an incoming gull noticed my presence, it would veer slightly off the course that would have brought it directly over me. I realized a scenario that would make for ideal photographing: what if, as crazy as this idea seems, one was to set up a few "scare crows" on each end of the bridge while I myself hid in a blind situated towards the middle of the bridge? The gulls would be indirectly forced to take a path directly over me. I might actually try this one day.

This individual appears to be an adult at first glance, but is it? 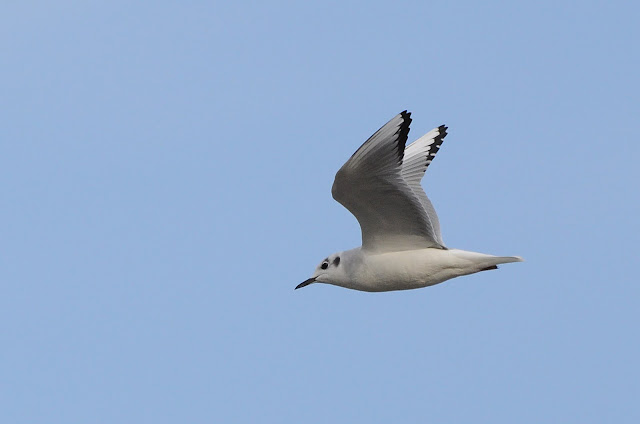 If one looks closely at the outermost primary, you'll notice a black sliver in the middle of the white on the underside of the feather. When the wing is held down, we notice this mark of immaturity even more. Here's a photo of this bird a few seconds later as it banked around the bridge:


By the time adults (and near-adult birds) reach Illinois, they've usually grown out their primaries and secondaries leaving them with a very fresh look. Here's one with the prebasic molt running a bit behind: 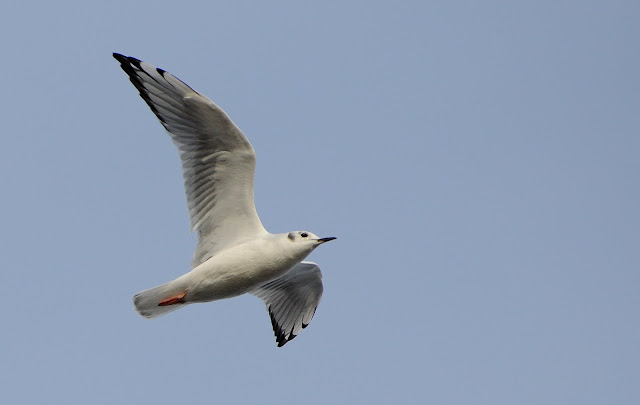 It was a beautiful day to be out. I estimated there to be about 130 Bonaparte's on the lake. Not many other lakes in Illinois get these numbers as consistently (Carlyle Lake attracts the most, reaching into the thousands some years). These numbers will continue to increase through early November and then they'll begin to drop off as we get towards Thanksgiving.
at October 25, 2011
Email ThisBlogThis!Share to TwitterShare to FacebookShare to Pinterest
Newer Post Older Post Home