The 2011 Fall season is proving to be a great one for Black-headed Gulls in the Eastern United States. Between the Great Lakes region and the Northeast, there's been at least one Black-headed report every week for the last 8 weeks. Interestingly, 5 of these reports have been of Black-headeds associating with Ring-billeds. So, what's this "small" gull doing hanging out with the comparatively larger Ring-billed? Aren't Black-headeds supposed to be in Bonaparte's flocks? Yes and no...more on this later...

Here's the most recent example of this season's incursion of Black-headed Gulls:

This BHGU has been in the company of 40+ Ring-billeds at the Hunt Valley Mall in Baltimore County, MD. It was first noticed on 10 December 2011 by Russ Ruffing who momentarily thought he had a Bonaparte's in a Best Buy parking lot. After admiring the red bill, Russ did a double-take and properly identified it as a Black-headed (C. parkin lotus).

Chris West and I observed this larid early Wednesday morning after having driven overnight from the Chicago area. We watched it for about an hour before it picked up and flew a mile east to the Papermill Flats. We refound it on a small pond at Papermill, which coincidentally, held a Black-headed in December of 2010 and then another in February of 2011. 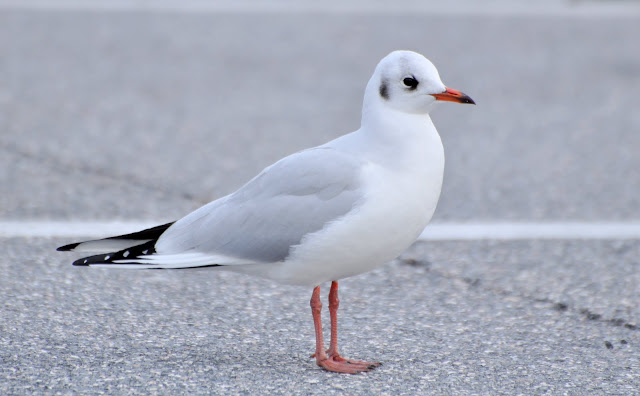 Black-headed Gulls are intermediate in size between Ring-billeds and Bonaparte's. Upperpart coloration matches Ring-billed but with a more silvery look. Although BHGUs closely resemble Bonaparte's, there are some obvious key-features that distinguish the two, especially adults. In addition to the reddish bill, note the blackish underprimaries that adult Bonaparte's never show:

Although outsized and outnumbered, the Black-headed did not have any problem competing for handouts in the mall parking lot: 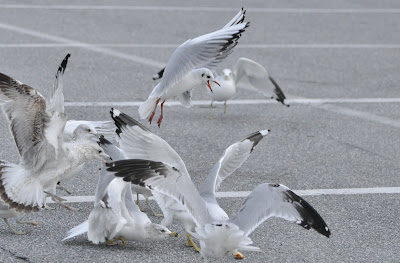 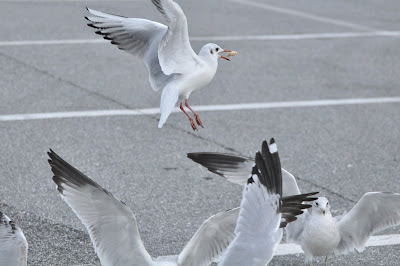 In the Old World, Black-headed's demeanor is described as "not shy", and so its presence in a mall parking lot in the United States shouldn't be too confounding. Interestingly, David McGrath from the UK recently sent me this note: "Ring-billeds here also hang out in car parks chasing chips/bread often with Black-headed Gulls rather than Common Gulls, to which they are probably more closely related".  Both Black-headed and Ring-billeds naturally scavenge for food and readily gravitate towards humans. Unlike Bonaparte's, Ross's and Little Gull, these two embrace anthropogenic elements very well. Ecologically, Black-headed is very much a Ring-billed/Laughing Gull type larid.

I recently learned of a couple of breeding colonies in Western Newfoundland where 20-25 pairs of Black-headeds are nesting in mixed colonies with Ring-billeds (p.c. Dave Brown). Although the two don't overlap seasonaly in St. John's, when they do come into contact, they have no problem feeding side-by-side at sewage outflows. I'm convinced that Black-headeds are just as likely - if not more likely - to be found with Ring-billeds as they are with Bonaparte's; this seems to be the current trend and I imagine this association will only continue to increase. Thinking back to my lifer Black-headed, it too was an adult that spent the winter associating with Ring-billeds along the Chicago lakefront. 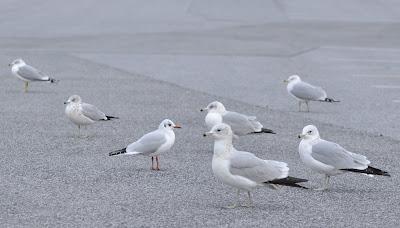 I can't help but wonder what sort of Black-headed numbers we'll see in the United States in the distant future. Although not yet with a prevailing presence in the states, it does seem to be increasing much faster than the still "vague" Little Gull. 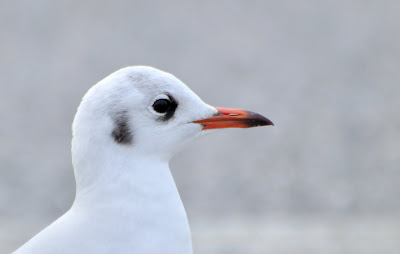 I was able to capture a couple of amature videos of this bird. Note its kek-kek call which is considerably different than the smaller Bonaparte's:

Edit: it should be noted that individuals found in the St. John's area do not allow close approach by humans and are rarely found at the local landfill (p.c. Dave Brown).